The massive wreck of the capsized cruise liner Concordia, twice the size of the Titanic, has been refloated and towed 280 kilometres to Genoa, Italy for scrapping.

The refloated wreck of the Costa Concordia cruise ship is seen being dragged to the harbour of Pra di Voltri near Genoa early on July 27, 2014. The doomed cruise ship Costa Concordia left its wreckage site on July 23, 2014 in one of the largest-ever maritime salvage operations, two and a half years after the disaster left 32 people dead. AFP PHOTO / MARCO BERTORELLO

GENOA, Italy, July 27, 2014, AFP – Ship horns blared Sunday as the wrecked Costa Concordia cruise liner limped into the Italian port of Genoa to be scrapped two and a half years after it capsized in a tragedy that claimed 32 lives.

The hulking vessel about twice the size of the Titanic was towed into port after a four-day, 280 kilometre journey from the disaster site off the Tuscan island of Giglio.

Fears that the damaged hull would break up under the strain, spilling toxic waste into Europe's biggest marine sanctuary, proved unfounded, and dolphins joined the convoy of environmental experts in welcoming the ship into Genoa.

The once-luxury liner arrived overnight and weighed anchor around two nautical miles offshore, where engineers attached it to several tugboats that manoeuvred  into Genoa's Voltri port at 1000 GMT.

Crowds of curious locals gathered to see the remains of the battered ship, which crashed into rocks off Giglio island in January 2012 with 4,229 people from 70 countries on board. 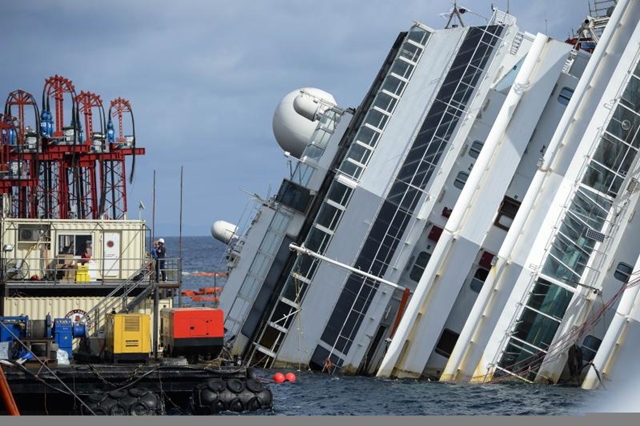 Members of the US salvage company Titan and Italian firm Micoperi work at the wreck of Italy's Costa Concordia cruise ship near the harbour of Giglio Porto on September 15, 2013. AFP PHOTO / ANDREAS SOLARO

Interior furnishings and fittings will be stripped out to make the vessel light enough to tow into the scrapping area, where it will be divided into three parts for dismantling.

Workers will start by removing what is left of beds, televisions, fridges and sofas in once-resplendent cabins and glitzy restaurants, bars and casinos.

For Genoa – former maritime power and home to explorer Christopher Columbus – the contract to dismantle the ship is a welcome boost in a period of economic crisis, creating hundreds of jobs in the city for a 22-month period.

The salvage operation to recover the Concordia was the biggest ever attempted and is expected to cost in the region of 1.5 billion euros ($2.0 billion).

The remains of the 114,500-tonne liner will not simply be thrown away: more than 80 percent of it is expected to be recycled or reused.

Between 40,000 and 50,000 tonnes of steel will be melted down and reused in the construction industry – or possibly for building a new ship – while undamaged copper wiring, plumbing, plastics, machinery and furniture will be sold on.

Personal belongings recovered on the lower decks will be returned to owners while items such as the ship's piano – which was being played as the liner hit the rocks – may end up in a museum. 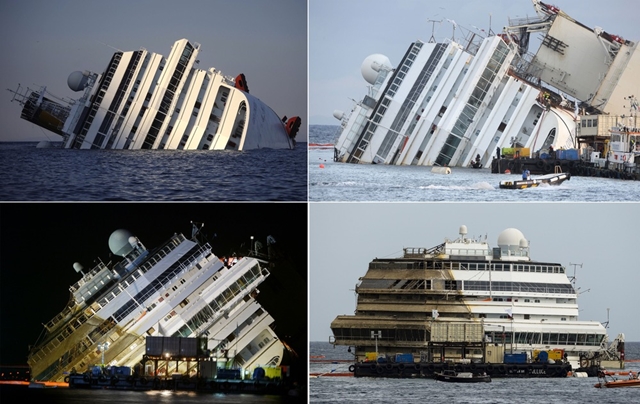 This combination shows four photos of the Costa Concordia, after it ran aground on Jan. 14, 2012 (top left), beginning to emerge during the salvage operation on Sept. 16, 2013 (top right and bottom left) and after it was turned upright on Sept. 17 (bottom right).

Images of the vast vessel on its side off Giglio went viral around the world, and its captain Francesco Schettino was dubbed Italy's "most hated man" after he escaped in a lifeboat while terrified passengers threw themselves into the icy sea.

Schettino is currently on trial for manslaughter, causing a shipwreck, and abandoning the vessel before all passengers had evacuated.