More+
Around the world in 1,000 haircuts
Learning
Advanced news

Around the world in 1,000 haircuts

26-year-old Japanese hairdresser Jun Kuwabara cuts the hair of people passing by in a temporary street-side salon. Jun set out earlier this year to travel around the world & cut the hair of 1,000 people along the way. 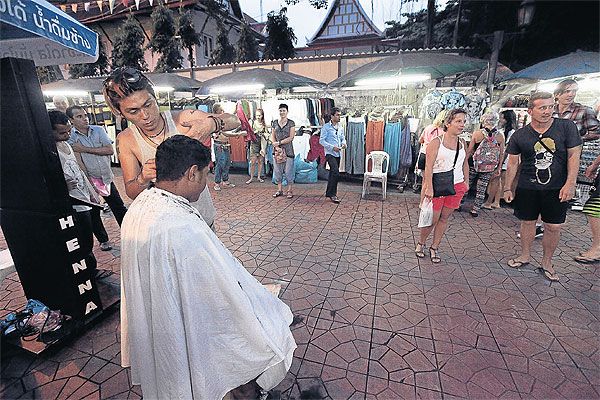 Jun Kuwabara is travelling the world and taking in the sights, all the while keeping his barber skills honed
26/08/2014
Kaona Pongpipat

Armed with scissors and a comb, Japanese Jun Kuwabara set out earlier this year to travel the world and, while he's at it, cut the hair of 1,000 people. In a recent interview with Life, the 26-year-old hairdresser took us through the leafy and vibrant Rambuttri in the Khao San area to set up "a temporary salon".

After having worked as a hairdresser in Tokyo for six years, Kuwabara quit his job. For the past three months, streets, sidewalks, public gardens, riversides and beaches have acted as makeshift salons.

Kuwabara is three months into his journey and has given about 200 haircuts so far. All he carries with him is a small hairdresser belt for his appliances and a cover for people to wear while they have their hair trimmed — he often asks to borrow a chair from nearby shops or restaurants.  Recently, Instagram uploaded a story about his journey, causing Kuwabara's account's followers to skyrocket to 17,000 and counting.

"I've been to the Philippines, Cambodia, Vietnam and now is my second time in Thailand," he said, "I spent days in Chiang Mai. In the evening I went to Tha Pae Gate and gave about 30 haircuts to the local people, Japanese and European tourists."

It was while he was studying English at a language school in the Philippines where he had his first customer. He told a friend about his plan, who then agreed to have his hair cut by Kuwabara.

"It was right in front of the school," recounted Jun. "People were quite surprised and asked me why I was doing that. There were a lot of people surrounding us, but I'm not a shy person so I didn't mind."

In Bangkok, Kuwabara stayed at a cheap guest house near Khao San Road. In the evenings he would walk around the busy streets to find customers. But "customers" might not be the right word — a signboard Kuwabara also carries around informs people that the price of a  haircut is "up to you".

"You can give me however much you want," Jun explained. "Or you can give me food or beer instead. You don't have to give me anything if you don't want to. For children and disabled people, it's always free."

Jun said it's always difficult to find the first customer, but after that, with passers-by stopping to observe, it's much easier for the next to walk in.

"Whichever country I go, I ask the local people to help me write the signboard in that country's language. That makes it much easier for people to understand what I'm doing."

This is quite a shift in his working routine. In Tokyo, he worked hard all day, every day. Now, Kuwabara can work wherever and whenever he wants. It usually takes less than 15 minutes for each customer. From his swiftness, it's obvious that he trained in a salon for a long time.

"When I cut someone's hair, we build a good relationship," said Kuwabara. "If they can't speak English, I just use gestures, body language for telling how long or thin they want their hair cut."

Kuwabara said simply that he's been very happy with his experiences so far. One of the most memorable persons Jun has given a haircuit, he said, was a child in a Cambodian orphanage. It's not only about the haircut, but also the conversation Kuwabara had with him.

"He said he wanted to be a doctor when he grows up and that he would study hard," said Kuwabara. "What I felt is hard to explain. I guess I just feel happy because I can make people smile, especially when it's children."

One challenge Kuwabara has had so far is money. He's been living and travelling frugally on what he saved in Japan.

"I want to travel for a year," said Kuwabara. "From Thailand, I want to go to Malaysia, Nepal, India and then I don't know — maybe Europe, America and South Africa."

Another difficulty is the fact that Kuwabara has to be away from his girlfriend, who is waiting for him at home. Asked if he thinks she might break up with him at some point, he laughed and said he wasn't sure.

"I will ask her when I talk to her tonight,"  Kuwabara said, smiling.