Wanchai, 22, railway sleeper car employee, found guilty of raping 13-year old asleep in train & throwing her out of window to her death, has been sentenced to death with appeal for mercy rejected. 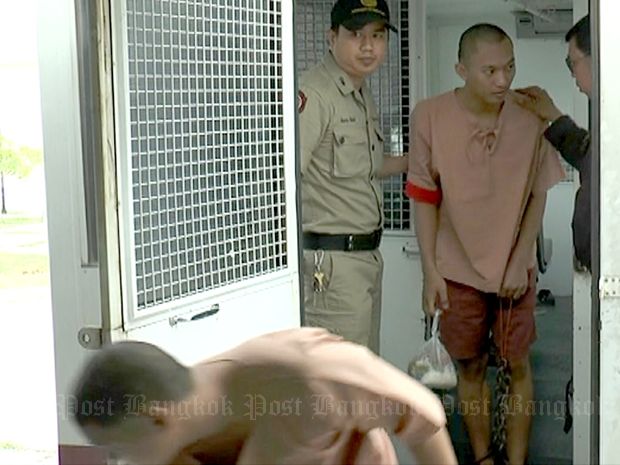 Wanchai is brought to hear the sentence at the Hua Hin court on Sept 30, 2014. (Photo by Chaiwat Satyaem)

PRACHUAP KHIRI KHAN - The Hua Hin provincial court has sentenced a railway employee to death for murder and aggravated rape of a young girl in July on a train heading to Bangkok whose body was later found beside the railway track.

The court on Tuesday found Wanchai Sangkhao, the first defendant in the case, guilty of several counts.

He was sentenced to death for murder, nine years in jail for raping a girl under 15, five years in prison for stealing while on public transport vehicles at night, one year for hiding a body and six months for drug abuse.

The gravest penalty of death prevails.

The court rejected Wanchai's claim for mercy because he had confessed in an act of repentance. The court said Wanchai confessed because he had no choice as the evidence against him was so strong. There were no grounds for commutation of sentence.

Nattakorn Chamnarn, 19, the second defendant who was charged with helping another person rape a girl under 15, confessed during the investigation, but denied the charge in court.

Nattakorn was sentenced to six years in prison as an accessory. Since he confessed during the investigation stage, the penalty was commuted by a third to four years.

Wanchai, 22, a sleeper-car employee of the Railway of Thailand, confessed to raping on July 5 a 13-year-old girl, a Mathayom 2 student at Satrinonthaburi School, while she was asleep in a bunk bed of a carriage on the No.174 Nakhon Si Thammarat-Bangkok express train.

Wanchai subsequently threw her out the window, even though she was still breathing. She was killed by the fall. Searchers later found her body beside the rail track. 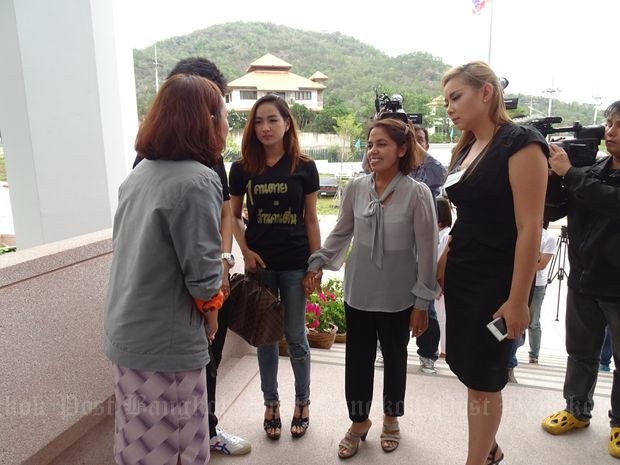 Panadda "Boom" Wongpudee (right), an actress and model, talks to the relatives of the victim at the Hua Hin court on Sept 30, 2014. Panadda has led the effort to push for the uncommuted death penalty for rapists after the train rape incident. (Photo by Chaiwat Satyaem)