With only 2 to 3 hours rest, 20-hour work days, 25 months at sea, the boss kept their documents & would not let them leave the boat. 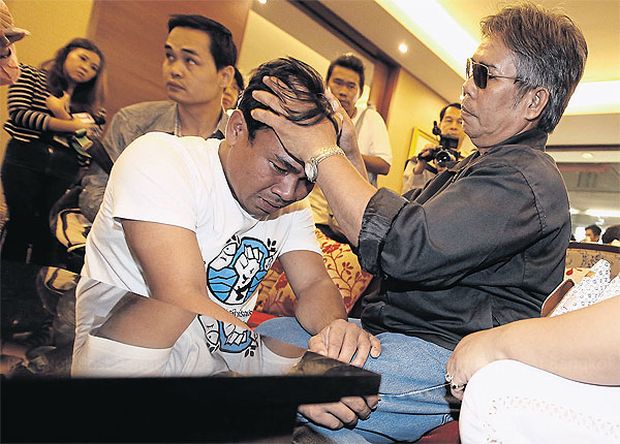 Boi Songsap cannot hold back his tears when he meets his relatives at Suvarnabhumi airport. He, and five others, returned to Thailand on Wednesday after suffering on fishing boats for three years. Pattanapong Hirunard

When Wuthisak Tantisuk was approached by a stranger trying to persuade him to work on a fishing boat, he knew he should be cautious about the man’s offer.

Unfortunately caution was not enough for Mr Wuthisak to avoid being forced to work in “hell”, before eventually ending up living as an illegal immigrant on the Indonesian island of Ambon.

The 44-year-old was among six fishermen reunited with their families in Thailand on Wednesday. The group was saved from Ambon, where they had taken refuge after escaping unbearable working conditions on deep-sea trawlers, which they counted as the worst moments of their lives.

The six men were rescued by staff from the Labour Rights Promotion Network Foundation.

Staff from the foundation visited Ambon between Aug 24 and Aug 29 to inspect the conditions of several deep-sea trawlers there and worked with Indonesian and Thai authorities to bring the men home.

The authorities are now striving to rescue another four Thais and 10 Myanmar fishermen who wanted to leave the island.

Mr Wuthisak told the Bangkok Post he had been drugged before being taken to the boat to begin work. He said he was aware that something bad might happen when he met the stranger early this year. After another stranger joined their conversation, he fell prey to the scheme.

“Someone might have put something in my water or replaced it with a new bottle containing drugs, because after just a few sips, I was dizzy and soon fell unconscious,’’ he said.

He woke up at a restaurant before being taken onto a fishing boat in Samut Sakhon with another 13 men who looked “unwilling” to begin their work at sea, Mr Wuthisak said.

All new crew members were forced to sign their names on loan contracts saying they had each borrowed 30,000 baht to pay brokers who had introduced them to the owners of the boats. After that, they had no life and worked night and day to settle the debts, Mr Wuthisak said.

Crew members were paid between 6,000 baht and 8,000 baht each month in return for working 20-hour days. “There were almost always jobs on the boat available,” he said.

The faster the fishermen worked, the sooner they could go to bed. “However, I never felt that I had enough sleep as I was given only two or three hours to rest,’’ he said.

Mr Wuthisak decided to escape from the trawler and eventually managed to hire an Indonesian man to take him in a small boat to Ambon.

He had to work secretly on the island since he was afraid of being found by his boss or arrested by the police.

Mr Narongsin had been ordained for five years before he decided to leave the monkhood and look for a job last year. Unlike Mr Wuthisak, who was forced to work, Mr Narongsin said he was willing to work on a trawler after being promised decent wages. One day, when he found his boat had entered Indonesian waters, he planned his escape, as he had never intended to travel so far.

“What I experienced was more painful than any assault,” said another victim, Boi Songsap, 30. The Bangkok resident said his decision to take a job on a trawler was not naive.

Mr Boi had worked on fishing boats for more than 10 years, but did not want to spend long periods at sea.

“I had worked on the boat for three years. It was too long,” he said.

One day, Mr Boi asked the boat’s skipper to let him come ashore, but his request was rejected and the skipper verbally abused him.

The skipper challenged Mr Boi to “return to the mainland yourself if you have a brain”. After years without rest, the words pushed Mr Boi over the edge and he vowed to escape.

The fishermen all shared similar experiences working on fishing trawlers, including unfair wages, long hours and extended periods at sea.

Many seaman’s books have been forged and kept by their bosses to prevent fishermen escaping, said Phutthiphat Loetchaowasit, chief of the Social Development and Welfare Department.

“It’s better to live and work in our hometown on the mainland,” said Mr Boi’s aunt Saluai Sukun, as she hugged her nephew.