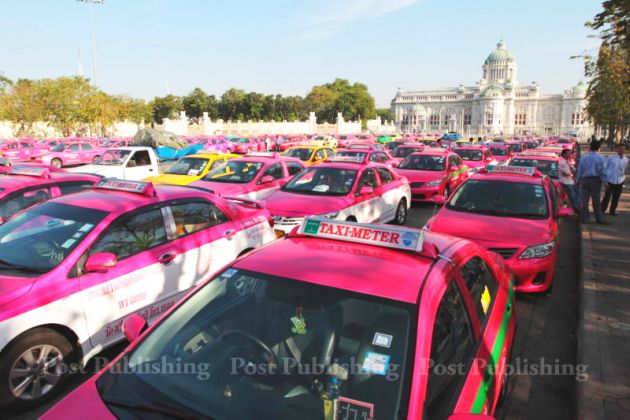 Taxi's grouped together in a show of solidarity to demand higher fares.

Taxis must behave for higher fares

Why is this important? Standards for taxi operation need to be upgraded as frequent complaints about taxi service clearly show. Demands for a fare increase are a good opportunity to introduce new higher standards. Taxi drivers will get their fare increase, if they adhere to higher standards (quid-pro-quo).

Taxi fares are set to increase by December under government plans to help drivers cope with rising operating costs — on the provison that drivers clean up their act. As part of the conditions, cab drivers will be ordered to brush up on their manners and repair vehicles to meet safety and hygiene standards, including air-conditioning systems. If the authorities and taxi operators can agree on new minimum standards, a process of inspecting taxis to see if they meet required standards will start. Taxis which meet the standards will be issued with stickers certifying the quality of their service.

Taxi drivers would have to agree to stop bad habits such as rejecting passengers or dropping people off before their destination,if they want the fare increase to go ahead. Officials will also assess the services of metered-cabs every six months and allow the public to offer suggestions on how to improve taxi services.

If cab drivers and taxi operators accept the conditions for the fare increase, starting next month for a period of 45 days, taxis will be inspected and certified. After that, taxi fares will be allowed to increase, no later than December. Fares for short distances will still be cheap, but fares for long distances will rise. The new rates should guarantee drivers make at least 300 baht a day in profit. 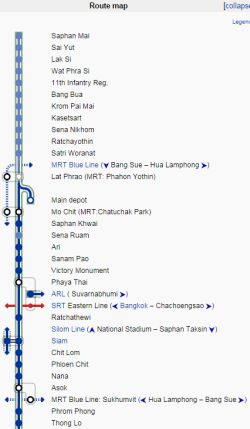 Green Line extension which will finally get underway in 2015 (Source: Wikipedia on Sukhumvit Line)

Why is this important? Many people in Thailand want an end to martial law now, but some risks of civil unrest that have disrupted the Thai economy in the past apparently still remain.

Thailand remains at “high risk” of civil unrest in the coming quarter despite the country remaining under martial law, according to UK risk-analysis and forecasting firm Maplecroft Ltd. Its quarterly Civil Unrest Index, which assesses the likelihood of strikes, protests, ethnic or sectarian clashes or conflict disrupting business operations, ranked Thailand 16th out of 197 countries, leading all Asian manufacturing nations. The relatively high ranking comes despite the country remaining under martial law and governed by a military appointed legislature.

Prolonged anti-government protests in Thailand, which culminated in a military coup in May 2014, shut down much of the country's commercial centre. The protests not only disrupted business operations in Bangkok, they caused the International Monetary Fund (IMF) to lower the 2014 projected GDP growth rate to 2.5%, down from 5.2%, which could cost the country an estimated US$9.8 billion. Tracking the trajectory of countries with rising levels of unrest should be a top priority for business continuity planners and risk managers. Civil unrest can create significant risks to operations and supply chains and impact the safety of employees and company property.

Overall, Hong Kong experienced the largest increase in risk over the last quarter, due to the mass democracy protests of recent days. 20% of all the 197 countries listed saw increases in the potential of mass demonstrations, labour protests and ethnic or religious violence. Key nations experiencing increases included Hong Kong, Kenya, Nigeria, China and Mexico. In Asia, civil unrest poses a "high risk" in not only Thailand, but Indonesia (23rd), Vietnam (24th), China (26th), India (28th), Cambodia (32nd) and the Philippines (35th). As a result of civil unrest some companies operating in and sourcing from these countries have faced severe disruptions, including from strikes, while the economic impacts have also been significant.

The Mass Rapid Transit Authority of Thailand (MRT) will spend the rest of the month assessing the qualifications of five consortia that are bidding to operate the Green Line subway. The Green Line — Mochit-Saphan Mai-Kukot — covers a distance of 18.4km and requires an investment of 26 billion baht.  Financial details of bids for the project and price negotiations will start in December.  A contract between the MRT and the winning bidder is expected to be signed in June 2015, with construction due to be completed three to four years after that.