Snarling & threatening each other, one of the bears takes the first punch & the fight begins, rolling down the hill to the street, knocking over mailbox & garbage can but avoiding cars. 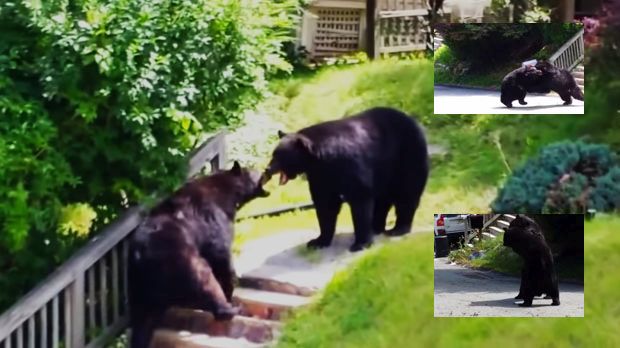 The bear fight begins next to a suburban house and quickly turns into a wrestling match on the street. (Source: YouTube)

Bear fight on suburban US street

For more than six minutes two bears engaged in a slow-moving long drawn-out fight, growling at each other, making threatening gestures and from time to time wrestling and hitting each other with their paws.

The fight broke out next to a house, then quickly moved down the hill to the suburban street outside.

The two bears clawed, pushed and charged each, one of the bears occasionally gained the upper hand for a while but the other bear eventually broke free and the fight resumed.

The bears moved to the side of the street as a car passed.

They finally slammed into the neighbour's mailbox, knocked over their plastic garbage can and then one bear lied pinned under the other bear as another car passed and stopped to watch them fight.

A bear expert claims such fights are quite common and arise over girl bears during mating season.