Bang Saen beach took on a new look on Tuesday as soldiers and municipal officials began a campaign to clear the beach of deck chairs and vendors and return the space to the public.

Bang Saen beach has a clear new look, free of beach chairs and food vendors seen on Monday in the bottom photo, after authorities launched a campaign clean up the popular Chon Buri beach and return the space to the people. (Top photo from Saensuk Municipal Office. Bottom photo by Jerdsak Saengthongcharoen)

CHON BURI — Bang Saen beach took on a new look on Tuesday as soldiers and municipal officials kicked off a campaign to clear the beach of deck chairs and vendors and return the space to the public.

Maj Gen Nat Intharacharoen, head of the 14th Military Circle, and Narongchai Khunpleum, mayor of Saensuk municipality, led an inspection of the three strips along the 2.5km beach they have declared off-limits to beach chairs and food stalls.

The three areas are from the beach-head roundabout to Click Café, the middle area from Chao Poh Saen Shrine, and then the end of the beach. 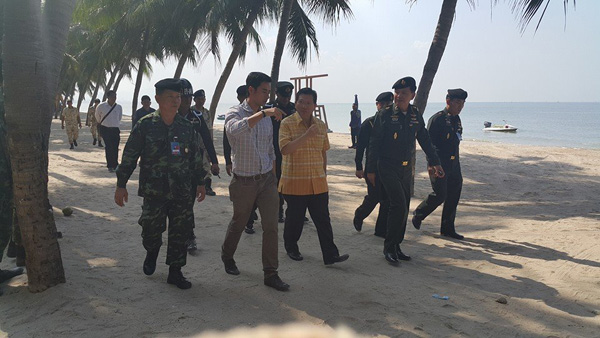 On Monday Mr Narongchai and Col Pob-anand Luangpanuwat, Maj Gen Nat’s deputy, met about 1,000 food shop owners, beach chair operators and providers of water sports and recreational activities to explain the new measures and regulations to reorganise the beach landscape, a campaign recently launched by the National Council for Peace and Order (NCPO).

People renting out beach chairs and food vendors have been ordered to move and continue their business in areas allocated by the authorities that are further back from the beach.

Chon Buri Muang district chief Lerson Sasipong said Bang Saen beach is a major tourist attraction in the province and visitors had complained that the entire length of the beach had been exploited and occupied by beach chairs and food vendors, leaving them limited space for recreational activities.

Mr Lerson said the Bang Saen beach cleanup would be a model for reorganisation of other beach landscapes in the eastern provinces.