Among the superstitutious, Kuman Thong, or baby amulets, remain as popular as ever, and, although illegal, actual baby body parts are sometimes used to make them. 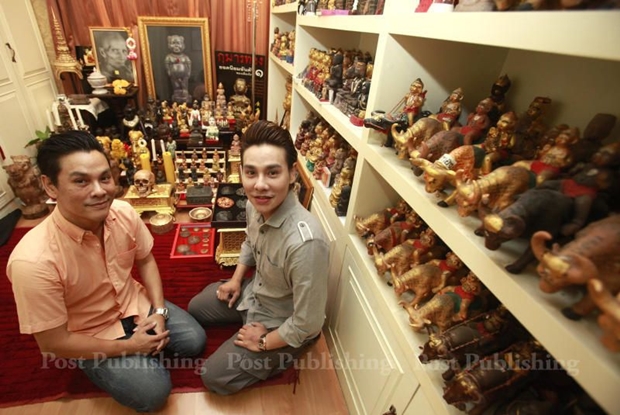 Excerpts from a story that appeared in Sunday's Spectrum magazine in the Bangkok Post.

Do you find this charm offensive?

Celebrities Jakkaphan Kansompot and Jakkapong Kansompot are proud of their massive collection of “Kuman Thong”, or baby amulets. In the prayer room at their home in Bangkok, several hundred Kuman Thong in different shapes, colours and sizes are displayed on shelves.

On the other side of the room, a plate containing bottles of water and puddings are placed in front of another collection of larger Kuman Thong, which are arranged in a small shrine.

“They are like our family, brothers and children,” Jakkaphan, or Jack, told Spectrum.

“Call me superstitious, but this is part of the traditional belief of Thais,” Jakkapong added.
Jakkaphan and Jakkapong, 41, once known as Jack and Jill in their days as famous singing twins, look every bit the modern professionals. Behind the slicked-back hair and designer jeans, they also believe the Kuman Thong have provided them with protection and support.

It started in 1997 when their business was hard hit by the economic crisis. Then teenage boys, the pair did not know what to turn to. Their mother gave them a Kuman Thong which once belonged to their grandfather.

“We were looking for something to hold on to.

We prayed for the Kuman Thong’s support to help us succeed. And it worked,” Jakkapong said.
Today, they have 1,689 Kuman Thong in their collection. 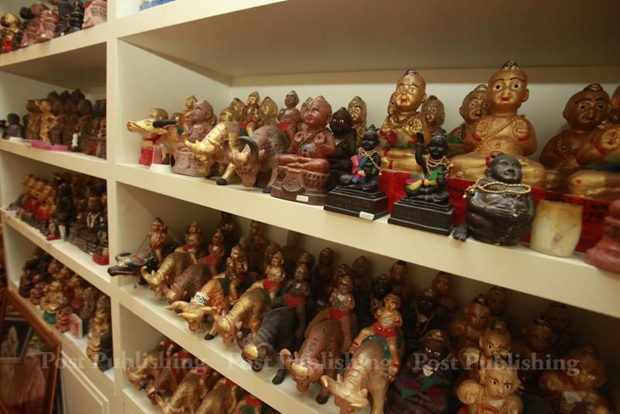 A small part of the collection gathered by Jakkaphan and Jakkapong.

Jakkaphan and Jakkapong are among many Thais who believe that possessing lucky charms will help bring them good fortune, security and protection.

The popularity of Kuman Thong can be traced to the Ayutthaya period, and myths and superstitions have followed them throughout the centuries. The most controversial is the belief they were made from the body parts of dead babies.

Kuman Thong were famously mentioned in The Tale of Khun Chang Khun Phaen folklore, set in the late 1500s. In the story, Khun Phaen made an amulet out of his child’s foetus by performing a black magic ritual. The unborn child then became a ghost called Kuman Thong, or “golden boy”. The folklore said Khun Phaen used the Kuman Thong for his protection on the battlefield.

These days, it is believed the Kuman Thong will bring good fortune. 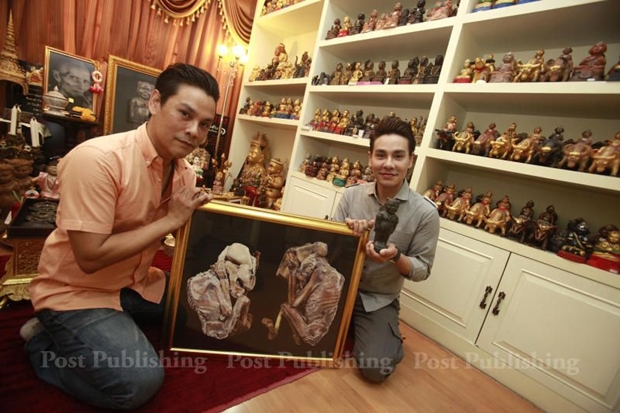 A photo of two preserved foetuses, which were used in the past to make Kuman Thong.

Kuman Thong are controversial because of the materials used in the amulets’ production. Two years ago, Thai police arrested a Briton of Taiwanese descent for illegally procuring six foetuses. It is believed that the foetuses, found stuffed inside a suitcase, were meant to produce Kuman Thong.

Pol Col Wiwat Kamchamnan, who oversaw the case, told Spectrum that some people smuggle body parts for their collection and to produce talismans or amulets, especially Kuman Thong. They often steal body parts from hospitals. In other cases, undertakers sold anonymous foetuses or body parts to the black market.

Despite the threat of penalties of up to one-year imprisonment and a 2,000-baht fine, people continue to steal body parts for the black market. “They believe that a talisman with body parts will bring them fortune,” Pol Col Wiwat said.

Asked where thieves can find body parts of the infants, Pol Col Wiwat said, “There are news incidents about abandoned infants and foetuses from unready mothers almost every day. Some of these may find their way to the procurer.

“I want to tell the hospitals and the morgues to take good care of the bodies in their care to prevent such incidents from happening again.”