Starting today, passengers will have to pay higher taxi fares in the Bangkok area, with the Transport Ministry approving an increase of 8%, later rising to 13%. 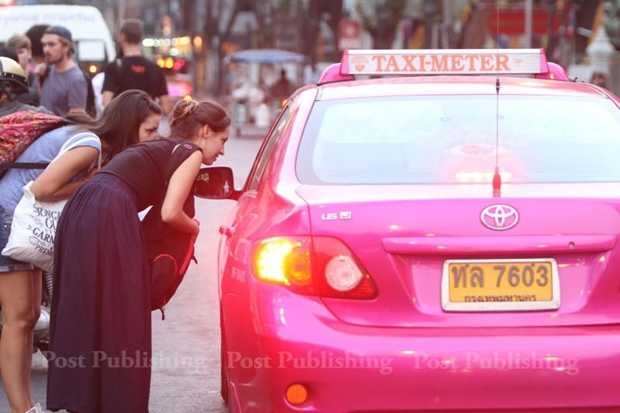 Unless they are going a very short distance, today's ride will likely be more expensive than yesterday's. PORNPROM SATRABHAYA

Friday, December 19: This story has been updated:http://www.bangkokpost.com/learning/easy/450679/higher-taxi-fares-still-coming-but-not-as-fast-as-expected

Starting on Saturday, passengers will have to pay higher taxi fares in the Bangkok area, with the Transport Ministry approving an increase of 8%, later rising to 13%.

Fare meters must be officially adjusted before the driver can charge the new rates.

The rise was originally scheduled to take effect on Dec 1, but was postponed to Dec 13 because 85% of cabs were required to pass inspection at the Land Transport Ministry.

Transport Minister Prajin Juntong signed an order on Dec 4 voiding the June 18, 2008 announcement on taxi-meter  fares, and approved the hike. Fares for cabs carrying up to seven passengers are increased to reflect actual costs. 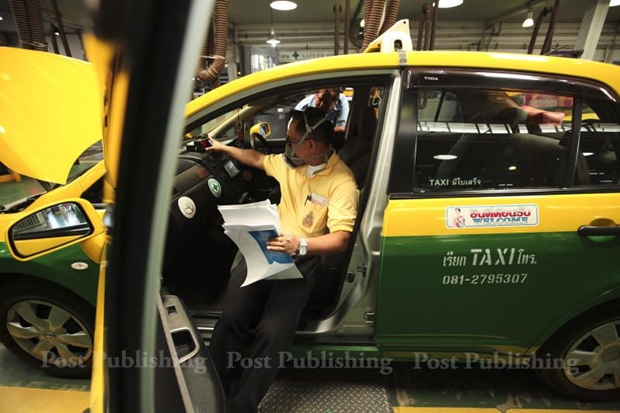 All taxis must undergo a safety check before their metres are adjusted, a process that should be finished by December 20. PATIPAT JANTHONG

There are two phases of the increase.

In the first six months, starting on Saturday, the rise is limited to 8%. After this period, the ministry will allow for increases to a maximum of 13% above the current fare after taxi services are further evaluated.

The distance calculated for the new fares was reduced to every 10 kilometres, from 12 kilometres.  The flagfall and the first kilometre is capped at the same rate of 35 baht.

In the event a taxi is caught in a traffic jam and is forced to stop or move at less  than 6 kilometres per hour, there is an increase of 50 satang from the previous 1.50 baht to 2 baht per minute.

Passengers will have to pay a surcharge of 20 baht if they use taxi services from a call centre, and a 50 baht surcharge when catching a cab at designated areas at Don Mueang Airport or Suvarnabhumi Airport.

Jirut Wisarnjit, deputy chief of the Department of Land Transport, confirmed the fare hike had been published in the Royal Gazette and was effective from Dec 13.

However, taxis would not be able to charge the new fares until their meters were adjusted and certified by the department.

This would happen gradually over the next week  and all cabs would be using the higher fares from Dec 20, said Mr Jirut.

The department is issuing stickers to taxis that pass the tests, he said. 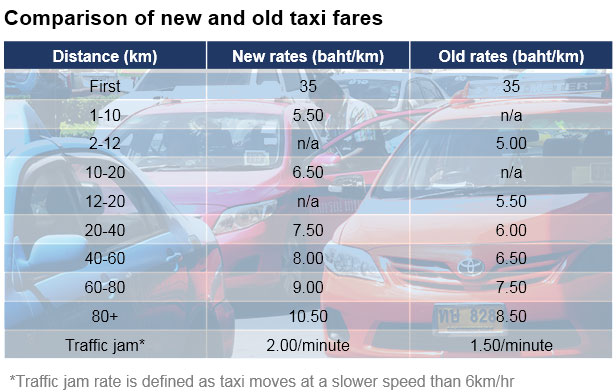