Available for download from Dec 30, the new "12 Core Values for Thais" sticker set for Line chat on mobile phones was displayed for the first time on Monday. 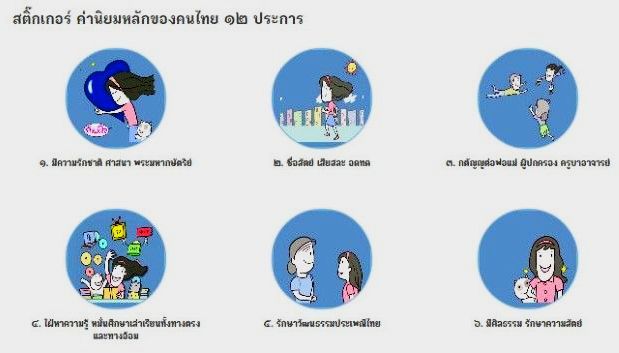 The government has unveiled the controversial "12 Core Values for Thais" sticker set for the mobile phone Line chat app on Monday.

The free set, a joint project of three ministries, can be downloaded from Dec 30 this year to Jan 28, 2015.

The agencies in charge of the project are the Information and Communication Technology (ICT) Ministry, the Science and Technology Ministry and the Culture Ministry. 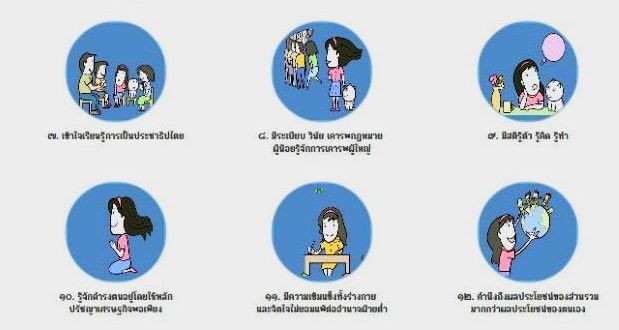 
Earlier, the project was criticised due to its high cost of 7.12 million baht.

Although the fee is what Line normally charges its corporate customers for launching free stickers, critics question the cost effectiveness of the project.

Companies are willing to pay the high fee for the stickers to connect with customers and boost their brands but the government has no such needs, especially when state coffers are running low, critics say.

From January to September this year, Thai companies launched 63 free set of stickers for the purpose.

1. Upholding the three main pillars of the country: the nation, the religion, and the monarchy;

2. Showing honesty, sacrifice, and patience with a positive attitude for the interest of the public;

4. Seeking both direct and indirect knowledge and education;

7. Understanding and learning true democratic ideals with His Majesty the King as Head of State;

8. Maintaining discipline and respectfulness for laws and the elderly;

9. Being conscious and mindful of one's actions in line with His Majesty’s the King’s royal statements;

10. Applying His Majesty the King’s sufficiency economy ideas to save money for times of need, being moderate with surpluses for sharing or expansion of business, while at the same time having immunity to hardships along the way;

11. Keeping physically and mentally strong, unyielding to evil powers or desires and having a sense of shame over guilt and sins in accordance with religious principles;

12. Putting the public and national interest before one’s own interest.