13,000 tonnes of tapioca disappeared from warehouse, crowdfunding set to take off in Thailand & more Thai investors turn to online trading. 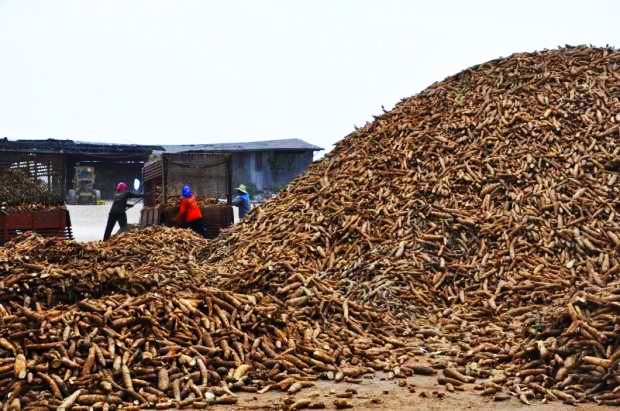 Workers load cassava in Nakhon Ratchasima. A DSI probe has revealed that 13,000 tonnes of tapioca pellets have disappeared from a warehouse. PRASIT TUNGPRASERT

Tapioca pledging has emerged as another failed scheme of the previous government, with losses estimated at 3.5 billion baht with losses mainly stemming from missing state tapioca stocks.  A recent probe by the Department of Special Investigation (DSI) revealed that 13,000 tonnes of tapioca pellets delivered by cassava farmers under the previous government's pledging policies have disappeared from a warehouse in Ayutthaya province.  Authorities have already filed 85 lawsuits against alleged offenders who include not only warehouse owners but also state officials.

The warehouse, owned by Ruam Thun Pattana Rice Mill Ltd Partnership in Ayutthaya's Wang Noi district, was leased by Kasetphuetpol Intertrade Co to store sacks of pledged tapioca. Kasetphuetpol was granted a concession by the Public Warehouse Organisation (PWO) to take part in the government's tapioca-pledging scheme for the 2011-12 crop. The company rented the warehouse in Ayutthaya to store 13,000 tonnes of pledged tapioca. Upon examining the warehouse, DSI officials found it empty with no sign of the tapioca.

The previous government set aside 44 billion baht to subsidise cassava for the 2012-13 crop, but it spent just 27.83 billion baht to buy 10 million tonnes of cassava root during that season after the scheme drew a  lukewarm response from farmers and a drought threatened to cut production.  The state now controls about 490,000 tonnes of tapioca chips and 7,799 tonnes of tapioca flour in stocks accumulated between the 2008-09 and 2012-13 crop years. The stocks are kept in 90 warehouses nationwide.

Crowdfunding set to take off in Thailand

Thailand's new crowdfunding website, www.dreamaker.cf  (Dreamaker Crowdfunding), will offer an alternative fund-raising source for budding entrepreneurs by the end of this month. Crowdfunding is an alternative model for SMEs that cannot gain access to the conventional financial system and have limited access to venture capital.

People will be able to develop their projects, sharing them on the website in order to raise funds from supporters. Ventures in technology, design, food, publishing, movies, art and healthcare are being targeted. 4,500 Thais supported Kickstarter, the world's leading crowdsourcing website [See here and here], pledging US$1 million as part of Kickstarter's $1 billion pledge milestone in March 2014. Crowdfunding is not popular yet in Thailand and so far there are only a couple of sites, such as www.taejai.com and www.perdmuak.com.

The website target is for each individual project to raise funds of at least 100,000 baht and a project posting to last for 30-60 days. Those who wish to support a project, pledge funds and when a project achieves its target figure, the payment will be charged to pledgers' credit cards. Supporters will receive rewards or other incentives such as limited edition gifts or products. The website will charge a fee of 5% of the total amount of funding for each project that achieves the targeted amount.

Online stock trading transactions have risen at a fast clip recently, representing 40% of total trading value, up from 27% last year, and over 60% of retail investor trading at the end of last year, thanks to more convenient trading with lower commissions using smartphones and tablets.

Brokers now charge commission fees of 0.15-0.2% of the transaction value for internet trading, while fees for traditional trades are charged at a negotiable rate. Normally, trading fees for retail investors through market officers start from 0.25%. As much as 60% of a typical security company's trading value stemms from their online service and the remaining 40% from traditional trade.

In the future, security market professionals will need to develop new skills such as the ability to offer advice on other investments such as mutual funds and insurance to offset the falling income from commission fees.