Thai-Japan railway through Kanchanaburi tried once before in 1940s but this time to feature Japanese high-speed rail & go all the way to Cambodia. 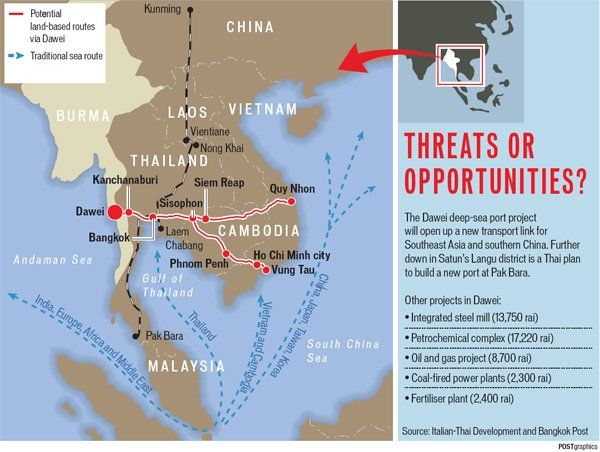 Japan will build an 874-kilometre railway linking Cambodia and Myanmar through Kanchanaburi, a cross-Southeast Asia line tried but never completed, with Prime Minister Prayut to witness a contract signing in Tokyo in two weeks.

Thailand and Japan have agreed in principle on joint development of a 1.435-metre standard-gauge rail network linking a border village in Kanchanaburi with Cambodia.

Deputy Prime Minister Pridiyathorn Devakula said Tuesday after meeting with Hiroto Izumi, a special adviser to Japanese Prime Minister Shinzo Abe, that Tokyo was willing to invest in the route to connect the Dawei project in Myanmar to Cambodia via Ban Phu Nam Ron in Kanchanaburi, Bangkok, Chachoengsao and Sa Kaeo's Aranyaprathet district.

The route offers another link between eastern and western Thailand.

A working committee [working group] of Thais and Japanese will be set up later to work out details such as route, scale and type of investment.

Prime Minister Prayut Chan-o-cha is scheduled to sign a memorandum of understanding (MoU) on the rail project during his Feb 8-9 visit to Japan. 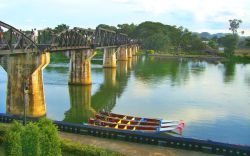 The Thailand–Burma Railway was a 415 kilometre railway that connected Burma and Thailand built by Japan in 1943 (Source: Wikipedia)

A railway from Thailand to Myanmar through Kanchanaburi has only been tried once before, but the project was halted in August, 1945.

Phu Nam Ron is best known these days as a border-crossing town for tourists and visa-runners from Thailand, seeking to visit Myanmar for a short time.

"The route will run at a speed higher than the Nong Khai-Bangkok-Map Ta Phut line [which will run at 160-180 km/h], as Japan wants to develop a genuine high-speed train with a speed of more than 200 km/h," MR Pridiyathorn said.

Transport Minister Prajin Juntong recently said after a meeting on the Sino-Thai rail development project that Thai and Chinese officials were on the same page regarding construction of the 873-km Nong Khai-Map Ta Phut-Bangkok-Kaeng Khoi route.

The Bangkok-Kaeng Khoi and Kaeng Khoi-Map Ta Phut sections will be built under one contract. Construction of those sections is set to begin in September.

MR Pridiyathorn said Japan was being urged to invest in the Dawei project, a long-awaited joint development between Thailand and Myanmar.

"Japan was invited to become the third partner in Dawei because Dawei is a very large-scale project," he said.

"Dawei's development will see quick progress if Japan agrees to join the development."

Japan is also invited to act as an observer at a joint meeting of Thai officials and their Myanmar counterparts this week.

The two countries are scheduled to sign an agreement on the first phase of Dawei development.

ITD and Rojana have proposed developing 27 sq km of industrial estates and constructing a two-lane road from the Thai border to Dawei as well as building a port and a power plant.

Dawei, a Myanmar city 350 kilometres west of Bangkok, will feature a number of megaproject investments and a special economic zone (SEZ).

Last October, the Thai and Myanmar governments agreed to revitalise the project by letting Thai firms play a bigger role in the much-delayed SEZ after Gen Prayut paid an official visit to the country.

Arkhom Termpitayapaisith, secretary-general of the National Economic and Social Development Board (NESDB), previously said the initial phase would take two or three years to complete.

A motorway connecting Dawei with Laem Chabang port in Chon Buri province is also under consideration.

When Gen Prayut met with Japanese Prime Minister Shinzo Abe in Myanmar last November, he called on his Thai counterpart to restore a civilian-led government - but the political difference did not prevent railway contracts and other economic talks. (Photo courtesy of Government House)