Some kind of a taxi fare increase for airport taxis now seems likely, but not as high as many drivers would like. 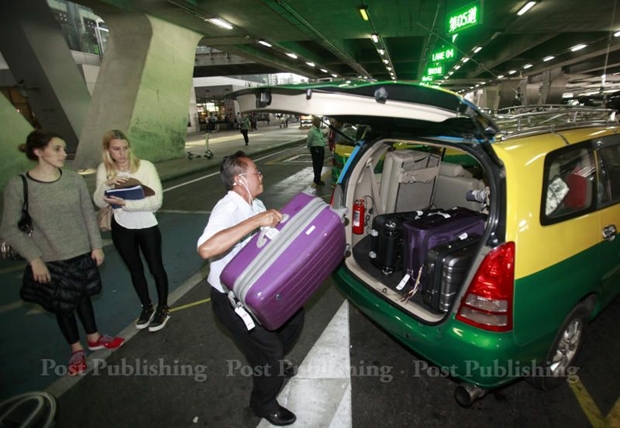 Is the extra space a bigger taxi offers worth an extra 50 baht surcharge from airports and a negotiated rather than a flat-rate fare? Photos by Thanarak Khunton.

Transport officials are considering increasing taxi surcharges to 60 baht for sedans and 90 baht for vans at Suvarnabhumi airport, but are likely to reject pleas from cab drivers to charge extra for baggage or to use flat rates, said a source.

If Transport Minister Prajin Juntong backs the measure, the surcharge increase would be on top of meter-based fare rate hikes approved in December.

ACM Prajin declined yesterday to say what he would do, saying a meeting of transport executives yesterday did not reach a conclusion. "We need to consider the issue further," he said.

He and other executives would meet again next week.

He said authorities are considering the drivers' call to charge passengers with extra luggage, which add weight and lead to more fuel consumption.

They also weighed the idea of flat rates, which drivers say would help cover fuel costs for long journeys better than meter-based fares do.

ACM Prajin said he and his team are not rushing to decisions about the baggage fees, saying further talks with state and private stakeholders, as well as passengers, are necessary.

A Transport Ministry source, however, said the executives are likely not to approve the extra luggage fee because the surcharge increase would already help the drivers.

Meanwhile, the Land Transport Department, which enforces legal meter usage, was unlikely to accept a proposal that the drivers be allowed to switch off meters and offer a flat rate to passengers.

In the department's view, charging by the meter is more widely accepted internationally, the source said.

Larger taxis, such as vans and SUVs, want to increase the surcharge from 50 baht to 100 baht when they pick up passengers from Don Mueang and Suvarnabhumi airports.

They also want to be allowed to turn off the meter and negotiate fares for long-distance trips. 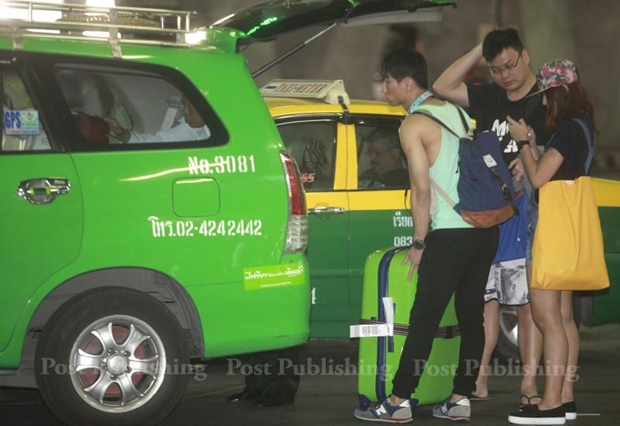 Taxis of all sizes pick up passengers at Suvarnabhumi,

The viral video clip taken by the Japanese businessman. (Update: Channel 3 has just aired a video-clip in which the taxi driver admits he handled the situation very poorly, but he strongly denies any intent to cheat. He said he was extremely fatigued after working almost a full day without rest)

In the first case, if the driver, identified as Udon Satsanapisut, is found guilty of overcharging, he will be slapped with a 5,000-baht fine and have his taxi driving licence revoked, said LTD deputy director-general Chirute Visalachitra.

Regarding the other case, Mr Chirute said it is likely the meter was tampered with. The woman was travelling from the Dusit area to Lian Duan Ramintra.

Even with the new fare rate in effect, the cab fare should not be that high.

When new taxi rates go fully into effect, passengers in Bangkok will pay an increased fare of about 8%.

Mr Chirute said the woman's driver, who was not named, could lose his public driving licence for good if he is found to have tampered with the meter.

A taxi driver who asked not to be named said yesterday some cabbies use two meters — one approved by the LTD and an illegal one that charges a high fare rate.

According to the driver, it takes just 10 seconds to swap out the devices, and drivers often switch to the illegal one when picking up passengers at bus terminals or van stands.

Asked about the claim, Mr Chirute said the department is unaware of such a practice and will send officials to investigate.