Londoners were taken by surprise Tuesday when a polar bear was sighted walking calmly through several parts of the city.

Londoners were taken by surprise Tuesday when a polar bear was sighted walking calmly in several parts of the city.

Why was it there? Was it dangerous? Was anyone hurt? Watch the video and find out for yourself.

Zai Bennett: Here at Sky Atlantic we've unleashed our own polar bear on the streets of London to celebrate the launch of Fortitude, our most ambitious drama to date.

Sofie Grabol: The fact that there are more polar bears than people in Fortitude makes them a factor that you have to deal with.

Mark Jones: To make a bear like this it takes a minimum of four weeks. Then, there's like four senior fabricators, you know, there's the moulding department, the sculpting department; there's so many people involved, we can build the most realistic and believable creatures or animals and it's up to the puppeteers or performers to actually put the life into it.

Tom Wilton: First of all we took the time to watch a lot of polar bear footage. That was the first thing, understanding it's characteristics, it's behaviours, footfall, gait, all that kind of stuff, but it's beautifully made and it makes our life a lot easier to puppeteer it as well.

Sofie Grabol: The stunt with the polar bear. I can't wait to see the reaction. I think it's brilliant. 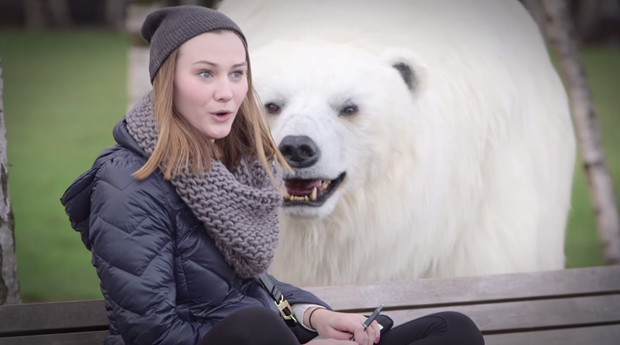 Passersby 1: It looks very realistic to me. I have to say I feel a little bit nervous standing there with my back to it.

Passersby 2: When I first came out there was no-one around it, so I actually did think it was real.

Passersby 3: And I still can't figure out how it looks so real. Is it real?

Richard Dormer: Yeah, if I saw a polar bear walking down the street, I would start to run.