After business failure, debt & disabled arm drove her into begging, for 10 years their children back home in Surin never knew mom & dad supported them by begging. 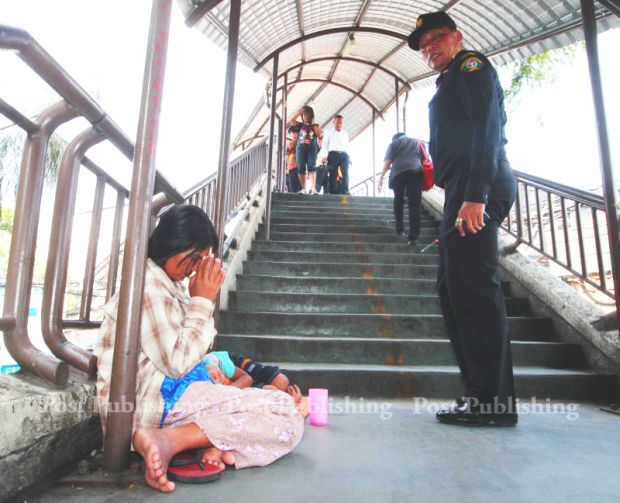 As authorities are rounding up beggars, they find many with secure life in this kind of living rather than other decent careers. (Photo by Pawat Laopaisarntaksin)

Begging funded school for her 4 children

Begging on the streets put four children of a Surin couple through school and none of the kids ever knew their parents were panhandlers.

That was one of the many stories revealed by a nationwide crackdown on beggars from Jan 26-30.

The unnamed couple was among five vagabonds rounded up from the centre of Buri Ram province on Wednesday. They had their profiles recorded and were warned not to beg again.

The wife has an impaired arm, but said had borrowed to start her food shop, but it lost money. She quit, leaving her some 50,000 baht in debt.

Later she decided to make use of her disability by becoming a beggar. She travelled with her husband on trains to beg in congested areas nationwide for a decade and her destinations included the Khlong Thom market in Bangkok.

The unidentified woman who is a native of Surin province said that, thanks to begging, she and her husband raised four children and sent them to school. Two of their children graduated and have their own families while the other two are studying. She said they did not know they had begged to make a living.