Police have just circulated footage of two men suspected of planting the bombs near Siam Paragon. Meanwhile, the army chief has denied rumours that Sunday's bombs were planted in an attempted to prolong martial law. 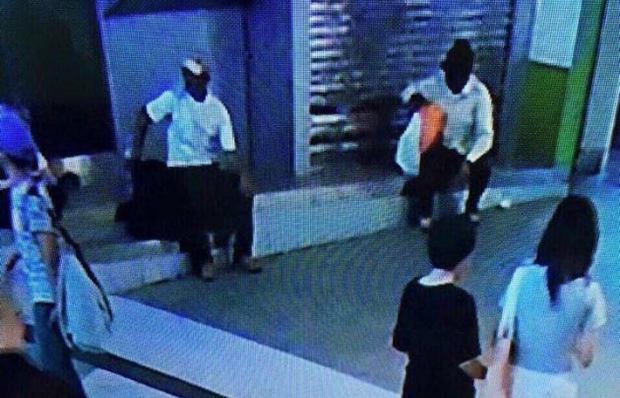 Police were looking for two suspects in connection with explosions at Siam Paragon shopping mall in central Bangkok at the weekend, an official said on Tuesday.

Two male suspects, wearing white shirts, were seen on CCTV lingering near the scene of the bombings moments before the blasts.

Police circulated the footage and asked the public for any leads that could lead to arrests, a police source who declined to be named said. 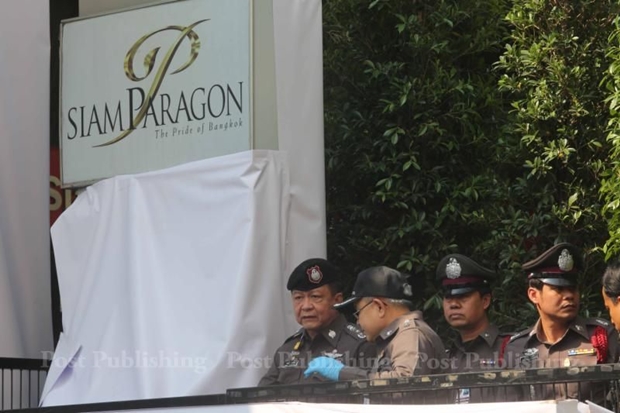 Army commander Udomdej Sitabutr vehemently denied speculation spreading Monday that the explosions at Siam Paragon on Sunday were an attempt by the government to prolong martial law.

"The state would never do that. We do things honestly. We don't create situations," he said.

Forensic officials and investigators from Pathumwan police station collect evidence from the scene of the blast outside Siam Paragon. PATTARACHAI PREECHAPANICH

Rumours that the Paragon blasts were staged to justify the enforcement of martial law spread widely Tuesday.

Gen Udomdej played down suggestions the incident was aimed at challenging the government and the National Council for Peace and Order (NCPO), saying motives have not yet been established and the incident could be a prank by rogue groups.

The army named three groups it believes could be responsible for the two explosions, while police said they are "90% certain" the attack is politically motivated.

According to a source, the three groups the army suspects are those affected by the NCPO's crackdown on bribery, extortion and corruption; the political group dissatisfied with the military government; and police officers who are displeased after recent transfers.

Pol Gen Chakthip Chaichinda, deputy national police chief, said at least two people were involved in Sunday's explosions and warrants for their arrest are expected to be issued this week.

Police spokesman Pol Lt Gen Prawut Thawornsiri said the explosive devices were similar to those used in Min Buri last year, but said there is no evidence linking the blasts at the moment.

Prime Minister Prayut Chan-o-cha Tuesday condemned the blasts and urged the public to give authorities enough time to solve the case. 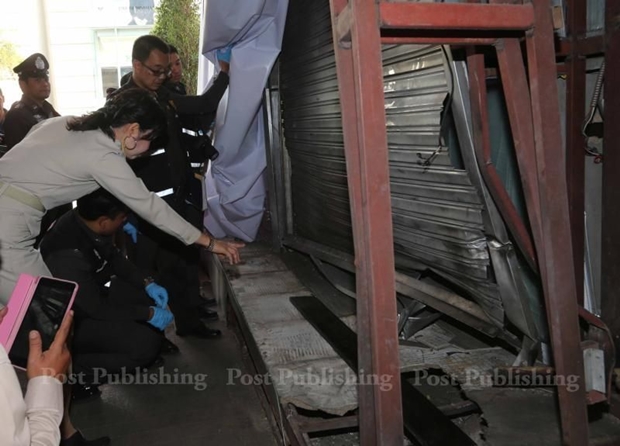 Security has been stepped up at the blast site, near a walkway linking the Siam Paragon shopping centre to BTS Siam. PATTARACHAI PREECHAPANICH

Gen Prayut said it was too early to conclude whether the incident was politically motivated.

"An attack like this is a criminal offence, even if it is politically motivated. People can't resort to violence because it is against the law.

"People must understand that differences of political views and breaking the law are two separate issues," he said.

He said security would be intensified following the blasts and called on the public to report any suspicious objects or individuals. 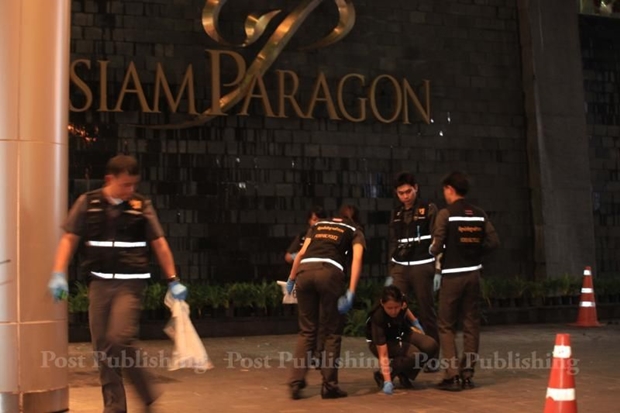 From our online reporters: National police chief Somyot Pumpunmuang is confident that, with many pieces of evidence in hand, authorities soon will issue warrants for the arrest of those responsible for the two bombs that exploded in front of Bangkok’s Siam Paragon shopping mall Sunday night.

National police spokesman Pol Lt Gen Prawut Thawornsiri told a press conference today that it is still too early to identify suspects in last night's bomb incidents or its motive. Police are not ruling out a political motive, a local dispute simply an attempt to cause confusion. 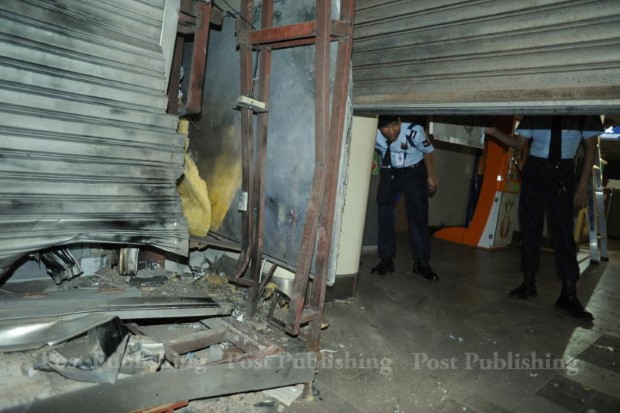 Last night's bombs were said to be low-grade explosives, but they look like the could have caused serious injuries if they were put in a public place. POST TODAY photo.

As the bombs were not very powerful, damage was limited. National Police chief Somyot Pumpanmuang had ordered security to be tightened in public places, like train and bus stations and major shopping centres.

Paragon and other retail outlets in the Siam Square/Siam Center area were closed, roads were blocked and shoppers and diners were evacuated from the area.

Pol Lt Gen Prawut Thawornsiri, a police spokesman, said the bombs were hidden behind a transformer at BMA Express Service, between the Siam BTS station and the luxury mall. 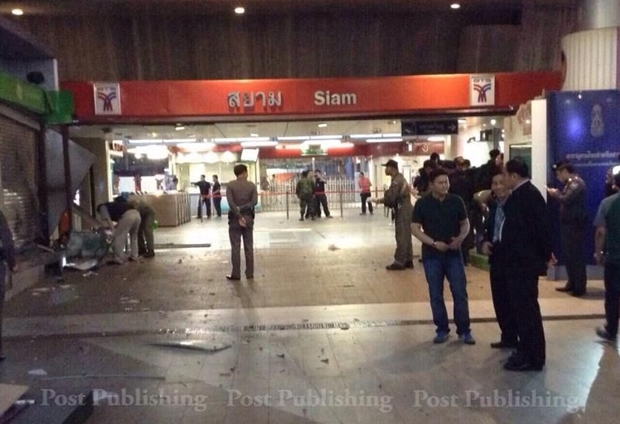 The aftermath of the bombing is seen on a walkway near the entrance to the Siam BTS station, an area well-known to Bangkok shoppers. POST TODAY photo.

The two improvised explosive devices (IEDs) were set on timers to explode at about 8pm, a peak time for shopping, entertainment and dining out in the Siam Square area. Despite this, Pol Lt Gen Prawut said the bombs "were not intended to kill".

No motive for the attacks was given. Authorities at first told the media the bombing was the explosion of a power transformer of a Paragon billboard. They dropped that story and admitted the blasts were caused by bombs after several hours of investigation.

Thailand is officially under martial law, but police handled crowd control, and acted as spokesmen for the media. Spokesmen asked the public not to panic, despite the mishandling of the early hours of the investigation. 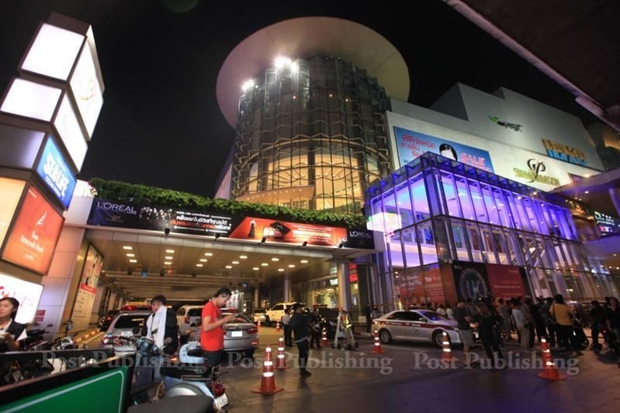 Crowds gather outside the Siam Paragon shopping mall which was quickly closed and the bomb site cordoned off. PHRAKRIT JUNTAWONG

Army Col Winthai Suwaree, spokesman for both the ruling National Council for Peace and Order (NCPO) and for the army, said the military was involved in the police investigation but provided no details. He said the motive for the bombing was unknown.

Pol Lt Gen Prawut claimed the motive of the attack was likely to create panic rather than take lives. He did not provide any details of the IEDs, but denied early reports that the bombs contained nails.