Monk boils himself in oil: Trick or truth? (with videos)

Can monk perform miracle of boiling himself in oil & defy physics? Or is it a trick with scientific explanation, as one Chulalongkorn University professor suggests. 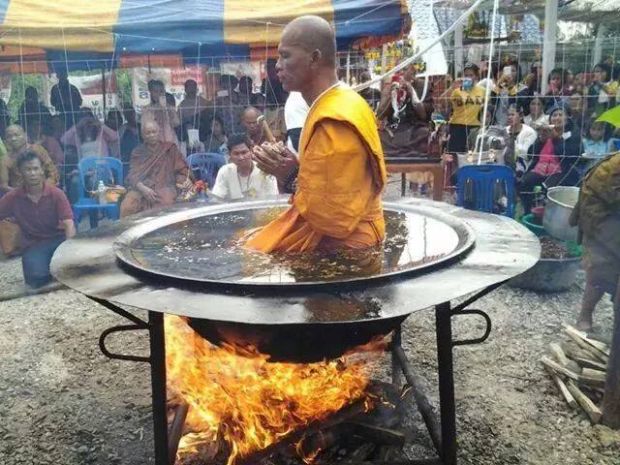 Monk boils himself in oil: Truth or trick?

Can a Buddhist monk perform a miracle such as boiling himself in oil and defy the laws of physics?

The ancient Pali scriptures or Tripitaka certainly records many miracles, but what about nowadays?

A monk in Nong Bua Lamphu province has recently become an internet sensation by praying calmly in a pot of oil that seems to be boiling.

In a YouTube video that has gone viral, the monk shares this magical power with others by touching objects they pass to him while he sits in the boiling oil.

In this way, his followers make their amulets magically powerful (or even a piece of fabric).

Although many admire the monk's show of invincibility to the laws of physics and accept the monk's magical powers at face value, uncritically without questioning them, other more inquiring minds are skeptical of his magical ritual.

Chulalongkorn University science professor Jessada Denduangboripant has come to the rescue of these inquiring minds, showing that sitting in seemingly boiling oil could actually be a sort of magic trick or illusion that could be performed by anyone with a little training and finesse.  [See here]

"The only way to prove it is [boiling] is to measure the temperature of the oil he's sitting in, the oil doesn't look like it's boiling," the professor observes.

This is the so-called "scientific method" in which: 1. a problem is identified, 2. data is gathered, 3. a hypothesis is made about the data, and 4. the hypothesis is tested.

The hypothesis to be tested here would be that the oil is actually not boiling and that is why the monk has no problem sitting in it. Testing would simply consist of taking the temperature of the water, if the monk would allow this to be done.

The science professor formulates another hypothesis, namely that "the oil doesn't look like it's boiling, and the pan just looks strange. The pan might have two layers to insulate the heat." or yet another hypothesis is that "the trick is to pour in some water in the bowl before the oil and start boiling. The water will absorb all the heat, but the oil never boils."

Whatever is happening here, the important thing is to test hypotheses until one proves to be true, this is the modern scientific way to determine the truth.

The Chulalongkorn science professor has, in fact, already demonstrated procedures for performing this trick in a YouTube video clip: