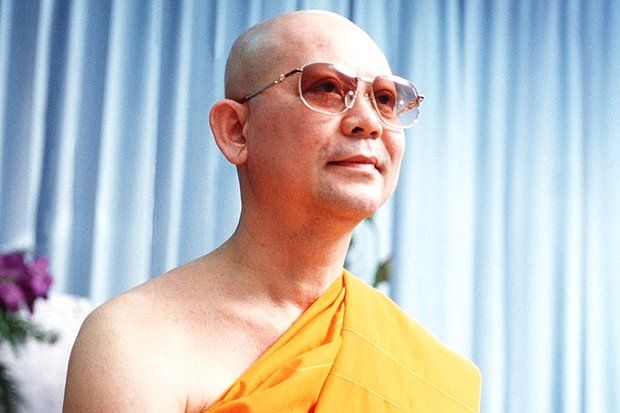 Phra Dhammachayo, founder, leader and "abbot" of the Dhammakaya Temple, has faced charges of corruption and fraud. The Dhammakaya sect has sparked controversy for years because of both its opulent style and unorthodox approach to Buddhism and wealth. The National Reform Council's committee on religious affairs has called for Phra Dhammachayo to be defrocked. (AFP file photo, 2001)

The National Reform Council’s (NRC) committee on religious affairs has called for Phra Dhammachayo, former abbot of Wat Phra Dhammakaya, to be defrocked.

He cited a letter, dated April 26, 1999, and written by the late supreme patriarch, His Holiness Somdet Phra Nyanasamvara.

In the letter, the late supreme patriarch listed two infringements by Phra Dhammachayo.

First, Phra Dhammachayo is said to have distorted Buddhist doctrines, which resulted in conflicts among Buddhist monks.

Second, he was reluctant to transfer to Wat Phra Dhammakaya 1,500 rai of land donated to him by his followers.

The letter, which was sent to the Supreme Sangha Council (SSC), suggested the monk be defrocked. However, the SSC did not defrock Phra Dhammachayo.

The matter was discussed at a meeting by the NRC’s committee on Tuesday, according to a Facebook post by council member Paisal Puechmongkol on Wednesday.

Instead of defrocking Phra Dhammachayo, the SSC ordered those concerned to force the monk to transfer the land to the temple. Phra Dhammachayo later agreed to turn over the land, and public prosecutors withdrew a civil suit against him in August, 2006.

At the time, the SSC acknowledged the late supreme patriarch’s order that Phra Dhammachayo should be defrocked for the infringement he had committed, said Mr Paisal. However, no further action was taken to enforce the order.

At Tuesday’s meeting, several NRC members pointed out the government should be responsible for enforcing the SSC’s resolution regarding the late supreme patriarch’s recommendation, said Mr Paisal.

The letter and subsequent developments are not new. However, the issue has arisen again in the context of the religious reforms which the National Reform Council (NRC) is considering as part of changes to a new charter.

The National Office of Buddhism (NOB) was unable to explain why the SSC’s resolution had not been implemented, said Mr Paibul, also chairman of the NRC’s religious affairs committee. “Since no action has been taken against Phra Dhammachayo, the NRC’s religious affairs committee will have to follow up on the case to find out why nothing has been done for so long,” said Mr Paibul.

Meanwhile, the NOB and other concerned agencies will be invited for discussions on the most recent allegation concerning Phra Dhammachayo and Wat Phra Dhammakaya.

It is alleged that more than 800 million baht was donated to Phra Dhammachayo by former board chairman Supachai Srisupa-aksorn of the Klongchan Credit Union Co-operative.

Mr Supachai is a key suspect in the 12-billion-baht Klongchan Credit Union Co-operative embezzlement scandal. If the monk is found guilty of accepting Mr Supachai’s money, he will have committed another violation of the Buddhist monks’ code of conduct, said Mr Paibul. 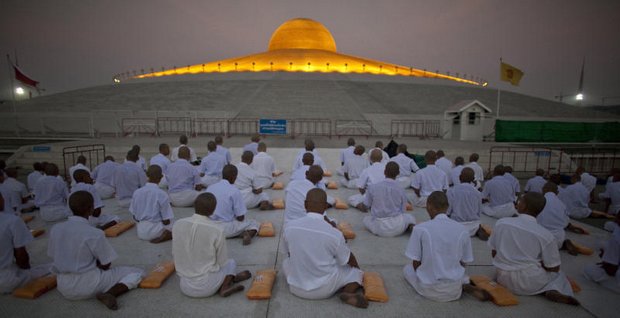 Ostentatious ceremonies such as this mass ordination of 100,000 monks have led to widespread controversy over Wat Phra Dhammakaya. (AP file photo)