Thailand jumped from 3rd highest in world for road accident deaths to 2nd with 44 deaths per 100,000 people compared to world average of 18 & lowest in Maldives of 2. 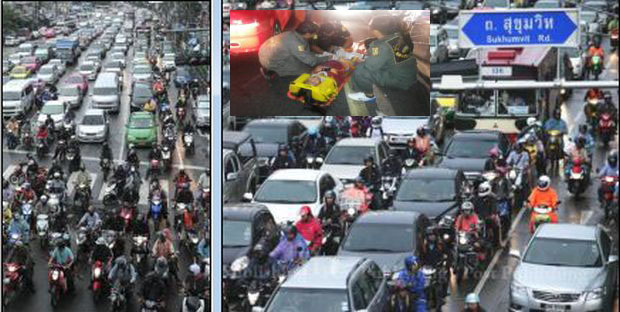 "...it would take all the traffic police we have just to issue tickets for these violators at a few given junctions. As a pedestrian, every week I experience how a zebra crossing is probably the most dangerous place to walk."

The response is so right on cue it appears theatrical. A day after Chilean cyclist, Juan Francisco Guillermo's round-the-world trip ended in tragedy after he was hit by a truck and killed in Thailand, the Ministry of Public Health announced it will take a leading role in promoting road safety.

Granted, this is not the first time people at the ministry have shown its awareness of road accidents as serious killers. Over the past few years, the ministry has come up with numerous public campaigns to reduce the number of road fatalities.

The result? Thailand has jumped from being ranked the third in the world for the highest number of road accidents — according to the World Health Organisation (WHO) a few years ago — to second place, with 44 deaths per 100,000 people, according to a study by the University of Michigan released last year.

It would be unfair to blame the Public Health Ministry for its apparent failure to curb increasing road fatalities.

What can the ministry do but come up with more awareness campaigns? In this particular case, the Public Health Minister [Rachata Rachatanawin] actually told ministry officials to serve as road-safety role models by not going over the speed limit or drink driving.

But I doubt this will make any difference to Thai people's driving habits.

According to the Public Health Ministry's own policy about how road accidents remain an unsolved problem in Thailand, it's not just reckless driving that's the problem, but a lack of responsibility in general.

I witness both irresponsible driving habits and a lack of respect for traffic regulations every day, both as a driver and a pedestrian.

As a driver, there has never been a day when I don't have to contend with people who avoid queuing for a turn by going into the wrong lane and then cutting back into the right one when they get to the front.

Since these driving habits have become normalised and happen on virtually every road, I can think of no solution. I mean, it would take all the traffic police we have just to issue tickets for these violators at a few given junctions.

As a pedestrian, every week I experience how a zebra crossing is probably the most dangerous place to walk.

In front of a public park where I jog during weekends is a modern crossing installed with some of the latest equipment — clearly-painted white strips, a large LED triangular panel with a blinking graphic showing a person walking, a red-green light, a flashing count-down, as well as a voice telling people to wait to cross the street.

Every time I punch the crossing request button and the light goes green for pedestrians, which means it is going red for drivers, I never see any car slowing down, let alone stopping for people to cross. We resort to what locals call a game of measuring who has the strongest heart, by cutting in front of speeding cars every time we need to cross the street.

In fact, a day after Guillermo died in the Northeast, two women were also hit by a car as they tried to walk across a pedestrian crossing in Bangkok. One was killed while the other was injured and taken to the nearest hospital. (See full story in English here and Thai here).

A month earlier, a recently-married young woman was also hit and instantly killed by a lorry at a pedestrian crossing on Asok Road.

At the time, the tragedy, which occurred in broad daylight around lunch time, made the news and prompted some public discussions about how dangerous our roads and drivers are.

What has happened since then? Has anything been done to improve safety conditions for pedestrians in the area?

I don't think we can be reassured by learning the only safety measure being taken is for office workers in the area to carry a red flag as they try to cross the street.

As is often said, road safety in Thailand will not happen by accident. Prime Minister Gen Prayut Chan-o-cha has a dream of promoting cycling and building more cycle paths around the country, both to promote tourism and encourage environmentally friendly travel.

His vision has become a bit scary following Guillermo's tragic demise, which followed the deaths of a British couple on a similar round-the-world quest in February last year.

Far greater law enforcement is needed than a new road safety protocol from the Department of Disease Control.