Alleged: As a child Phra Dhammachayo admired Hitler. Later, the rigid discipline & personality cult of the Nazi Party would serve as a model for Wat Dhammakaya. 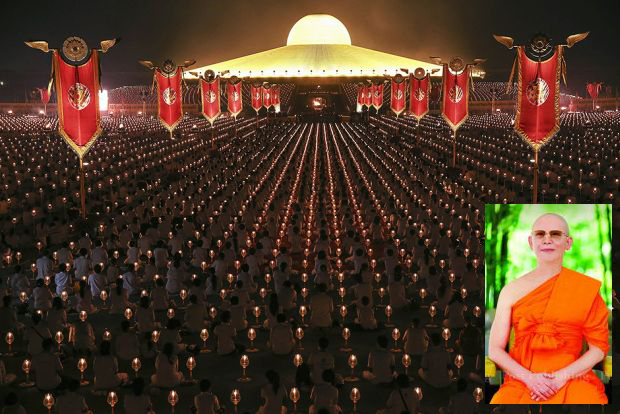 The structure of the Dhammakaya temple is said to be partly modeled on the rigid discipline and personality cult of the Nazi Party and practices of Adolf Hitler. The glowing banners shown here and the nighttime spectacle do seem to bear some resemblance.

His official biographers paint Phra Dhammachayo as a golden child... who was destined to lead his army of followers on the path to enlightenment.

But to his detractors, the monk is little more than a master manipulator, a self-confessed admirer of Hitler who has voiced his desire to "rule the world" ....

The mysterious abbot of the controversial Dhammakaya temple looks much younger than his 71 years, reportedly due to two facial massages a day and expensive skin cream...

"Dhammachayo successfully built his empire by copying a military structure with rigid ranks and discipline. Like a soldier, you are not allowed to question your superior," said Dr Mano Laohavanich was once the top-ranking monk at Wat Dhammakaya and one of Phra Dhammachayo’s most trusted aides.

Dr Mano is now a lecturer at Thammasart University and the Chulabhorn International College of Medicine, as well as a key member of the Reformation of Buddhism Committee.

Dr. Mano once questioned Dhammachayo’s teachings and was forced to leave the temple, later becoming one of the temple’s most outspoken critics.

While studying there, he formed a Buddhist Youth Club with his friends.

Chaibul also apparently liked to read and became interested in the biographies of great leaders from world history. He would read their stories repeatedly until he could recite the facts of their lives from memory.

The Dhammakaya website says Phra Dhammachayo was inspired by these people’s lives as he set his sights on greatness. "With his wisdom beyond his years, he wrote in his memoir when he was 13 that, 'If I choose to be in the secular world, I will go to the apex of the secular world. If I decide to choose Dhamma, I also want to go to the top,' " the biography says.

The website, however, excludes the name of the historical figure that, according to Dr Mano, young Chaibul was most interested in — Adolf Hitler.

Dr Mano said Chaibul became infatuated with Hitler, admiring the way the Nazi dictator could control a crowd, and expressed a desire to follow in his footsteps.

Chaibul was obsessed by the fact their birthdays were only two days apart, and that they shared similar childhoods of poverty and loneliness.

One day when Dr Mano was still a monk, he took a ride in a red truck with Phra Dhammachayo and passed a billboard with a picture of the world on it. Phra Dhammachayo told Dr Mano that he had no desire to be Thailand’s supreme patriarch. Instead, he pointed to the sign and said, "Look at that, it is the world. I want to own it."

Nowadays, Dr Mano said, the structure of the temple is partly modelled off the rigid discipline and personality cult of the Nazi Party.

"His first strategy was to target students, just as Hitler did when he first established the Nazi Party," Dr Mano said. "Then he slowly spread his teachings to the rich and powerful."

Senior politicians, as well as some of the country’s leading businessmen, are known to be among the prominent supporters of the temple.

Dr Mano explained that during major ceremonies that Dhammachayo attends, the seating arrangement is based on the "rank" of his followers. Ranks can be purchased for anything between 1,000 baht up to several million. Those who donate more are able to sit in the inner circle, while those in the lower ranks are forced to remain at the fringes.

According to his biography, when he was still in high school Chaibul stumbled across a book called Dhammakaya, based on the teachings of Phra Mongkol Thepmuni, of Pak Nam Phasi Charoen temple. The title refers to a philosophy of meditation that, it claims, will lead to enlightenment...

Chaibul became infatuated with the idea of visiting Wat Pak Nam Phasi Charoen to learn more, convinced he was now on the path to finding true meaning in his life.

A book about meditation referred to an Ajarn Lukchan, a nun who was a disciple of Pra Mongkol Thepmuni. This fortified Chaibul’s resolve to practise Dhamma at Pak Nam Temple, and to track down the mysterious nun.

In 1963, when Chaibul was 19 and preparing to go to college, he visited Pak Nam Phasi Charoen temple hoping to meet Ajarn Lukchan. But he was unable to track her down...

During his first semester at university, however, he returned to the wat to study meditation. This time, according to the temple website, he found Ajarn Lukchan who was at that time age 53.

The book he had read about Ajarn Lukchan had described the nun — also known as Mae Chi Chan — as a magical figure, capable of flying simply by using the power of her mind. In a more bizarre part of the story, she was able to use this mental strength to divert two atomic bombs that the US had apparently dropped on Thailand in 1945 — redirecting them to the Japanese cities of Hiroshima and Nagasaki...

On his first day of meditation study, Dhammachayo asked Ajarn Lukchan if heaven and hell were real. The nun replied, “They are real. I have been there to help my father who was in hell because of drinking. I entered a phra body [similar to an angel] to bring him to heaven. Do you want to go? I will teach you and we will go together.”

Spectrum went to Wat Pak Nam Phasi Charoen to learn more about Ajarn Lukchan — who died in 2000 — and her supposed "magical powers". The temple was full of people who had come to make merit on Makha Bucha Day. Somdej Phramaharatchamangkhalacharn, the abbot of the temple, is now the Acting Supreme Patriarch of Thailand. He was also the preceptor of Phra Dhammachayo.

Spectrum approached several people and tried to ask them about Mae Chi Chan. Most were unwilling to answer. But one person agreed, so long as his name was not published. He said he had known Dhammachayo since his university years, and was among the first to be ordained as a Dhammakaya monk before becoming disillusioned and abandoning the order.

"Mae Chi Chan was a blind old nun at the temple, who was very talented. The one Chaibul met was just a fraud."

He explained that when Chaibul went looking for Mae Chi Chan, this "fraudulent" nun happened to be there at that time, and was able to convince Chaibul that she was the real deal.

She later taught Chaibul and his friends from the Youth Buddhist Club meditation at the temple...

On August 27, 1969, after graduating from Kasetsart, Chaibul was ordained at Wat Pak Nam Phasi Charoen by Phra Somdej (currently acting Acting Supreme Patriarch of Thailand) and given the name "Dhammachayo", or victory by Dhamma.

The Dhammakaya website said funding for the construction started with 3,200 baht collected by Mae Chi Chan and a 196-rai land plot donated by a supporter, Khunying Prayat Paetpongsavisuthathibodi.

In 1972, another 80-acre piece of land was donated to the temple, expanding its site in Pathum Thani, about 40km north of Bangkok. The plot has now grown to some 3,000 rai.

But just a few years after the temple was built, the two other founders had a falling out with Phra Dhammachayo over his teachings and management style. They eventually moved on to other temples.

Within three years, the temple's revenue grew 300%. The target was young and educated people who could be easily impressed by the polished appearance of the temple. The grounds were clean and tidy, dominated by the unusual golden dome at its centre.

Wat Dhammakaya expanded its followers by using what was essentially a multi-level marketing model, where one follower would be given incentives to recruit new ones... Publicity stunts, such as parades of hundreds of monks through the streets of Bangkok, help draw in followers lured in by the temple’s grandeur.

Questions began surfacing over the temple’s doctrine as early as the 1990s, especially its insistence that merit-making be linked to the amount of money donated. It also drew flak over the selection of a woman dressed up in a golden peacock costume to lead a religious ceremony.

More recently, it has been embroiled in scandal over alleged links to the 12-billion-baht Klongchan Credit Union Cooperative embezzlement scandal.

The previous day, the DSI had summoned him and other monks from the temple for questioning after they were accused of receiving more than one billion baht from suspects in the embezzlement scandal.

Though impossible to determine because of the temple’s refusal to reveal details of its finances, Wat Dhammakaya is believed to be the richest in the country. It has more than 50 branch temples nationwide, and has expanded overseas with more than 130 temples around the globe.

The preliminary investigation into the Klongchan scandal has also found that the cooperative would lend Dhammakaya followers money to make merit at the temple, charging them above-market interest rates. Some followers were asked to donate money regardless of its source. 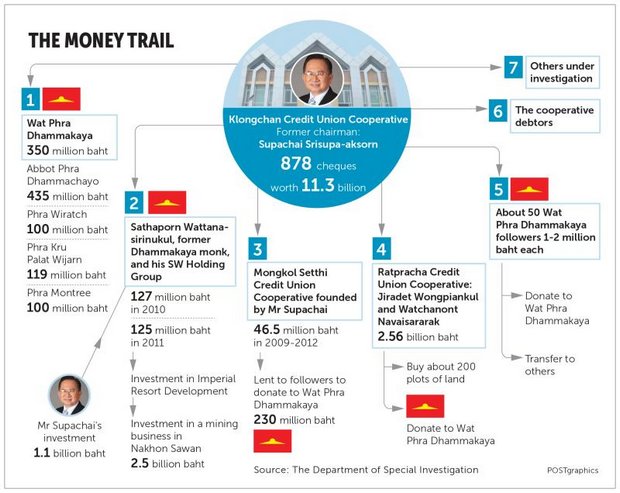 The complicated connections between Wat Dhammakaya and the failed credit union chief. 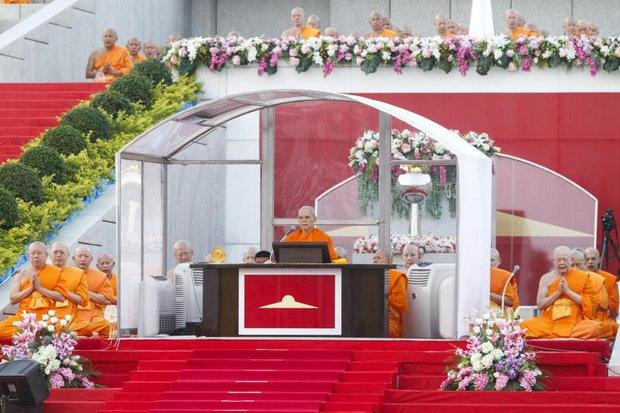 Wat Dhammakaya activities have at the center, the one founder and leader Phra Dhammachayo. 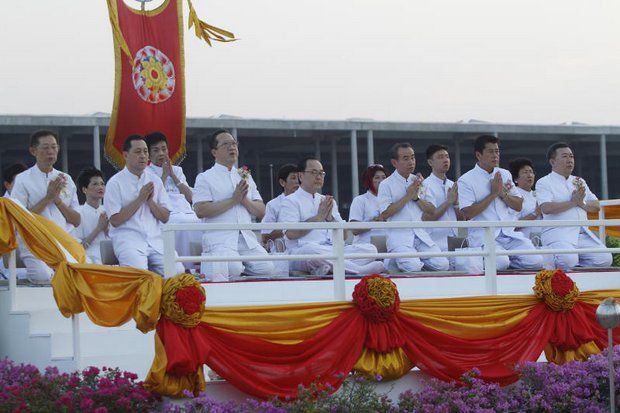 Leading businessmen who support Wat Dhammakaya get seated according to their rank and donations.