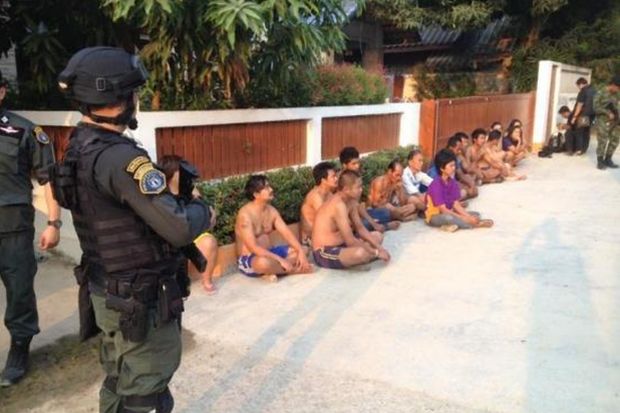 The success of crackdowns on criminal gangs operating on the resort island of Koh Samui last week has encouraged police to expand their list of targets to include more tourist destinations nationwide.

Acting chief of the Central Investigation Bureau (CIB) Thitirat Nonghanpitak led about 300 police together with military forces in a dawn operation on the resort island on Friday.

A combined team of 756 police and military raided 26 spots believed to be the hideouts of powerful people or criminals.

They arrested five suspects and confiscated 20 guns and 835 rounds of ammunition as well as three kilogrammes of kratom, a narcotic plant.

The decision to look into criminal cases on the island came after local businessman Panas Kao-uthai, 49, was gunned down in a restaurant early this month, apparently as a result of business conflicts among so-called influential figures on the island.

His death frightened villagers and caused panic on the island, which is Thailand's top tourist destination.

There was a concern that the high level of crime on the island was tarnishing its reputation as a safe tourist destination. Authorities were urged to speed up their probe into the murder.

During the operation, there was a search for the gunman who killed Panas, who was still at large.

Finally, last Friday night, Charoen Sisaeng, the suspected gunman, turned himself in to police for fear of being killed during the crackdown.

One day before the officers launched the raid, four other suspects in the killing were arrested: Samart Boonsin, an alleged local influential figure; Chanai Sooksom, a former local politician; Chalit Boonsa, a businessman; and Chayut Kaewaram, another suspected gunman.

The fleeing killers were caught on security CCTV cameras which made catching them easier.

The investigators learned that there were two gunmen, one of them being Mr Chayut, seen entering Mr Samart's house.

What most attracted the police's attention were allegations that Mr Samart had been at odds with Panas.

The officers nabbed Mr Chayut while he was about to take a ferry to leave the island.

Police said the Ratchaburi native initially denied involvement in the murder plot, but he later confessed after police backed their accusation with security camera footage.

Police believe business conflicts in various projects with Mr Panas led to the murder. The three suspects denied being involved.

The investigation revealed Panas and the suspects, who are business operators, were arguing over real estate projects and revenues from a trade fair on a pedestrian street in tambon Bo Phut.

Their conflict was so severe they allegedly threatened to kill one another.

The investigators believed the three suspects hired gunmen to kill Mr Panas because they were worried many local businesses would end up in the hands of Mr Panas who had good connections with investors outside the island.

This deadly conflict alerted the police to other mafia problems in Koh Samui, so a crackdown was ordered on criminal activities, also as a response to tourist concern about a rising crime rate on the island.

The coming  nationwide crackdown on mafia figures will involve raids on target areas as well as moving to block financial transactions of mafia suspects.