The six protected Asian black bears held illegally at the famed “Tiger Temple” have finally been removed by crane after 100 monks and disciples blocked the gates to prevent forestry officials from taking them away. 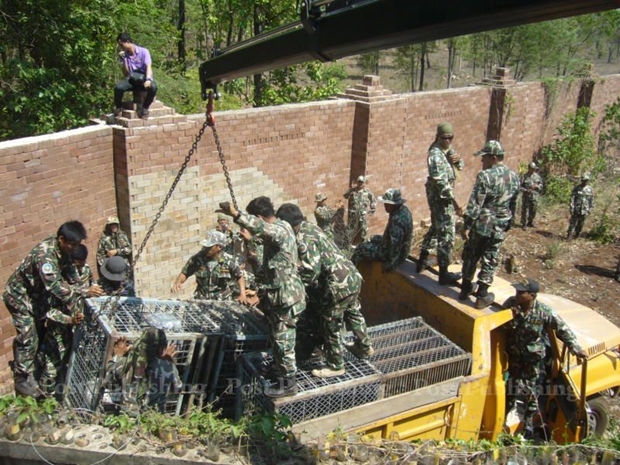 Foresty officials use a crane to take the captive Asian black bears out of the temple compound. PIYARACH CHONGCHAROEN 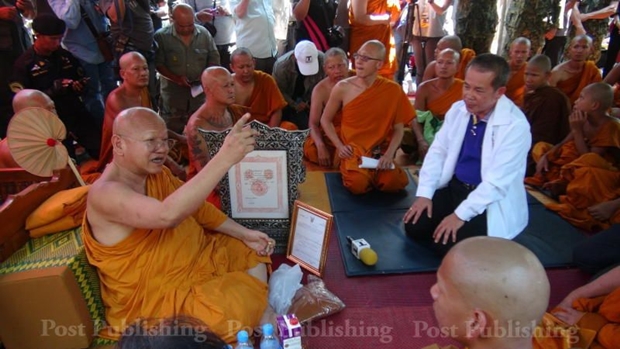 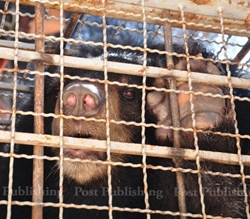 Two of the Asian black bears, known as "mee kwai" in Thai, in their cages. PIYARACH CHONGCHAROEN

Edwin Wiek, founder of the Wildlife Friends of Thailand (WFFT), reports via twitter that the bears have been successfully removed from the temple, but not with permission of the abbot or the temple's monks. Forestry officials were forced to bring in a crane and hoist the container holding the bears over a fence. They will now be taken to the Banglamung Wildlife Breeding Centre Thailand in Chon Buri.

The operation, according to Thai PBS took only twenty minutes as security forces blocked monks and disciples from interferring.

Post Today reporter Piyarach Chongcharoen  said the decision to use the crane took place after a tense 10-minute negotiation between deputy Department of National Parks, Wildlife and Plant Conservation chief Thanya Netithammakun and temple abbot Phra Vissuthisaradhera who flatly refused to release the bears and demanded their return. 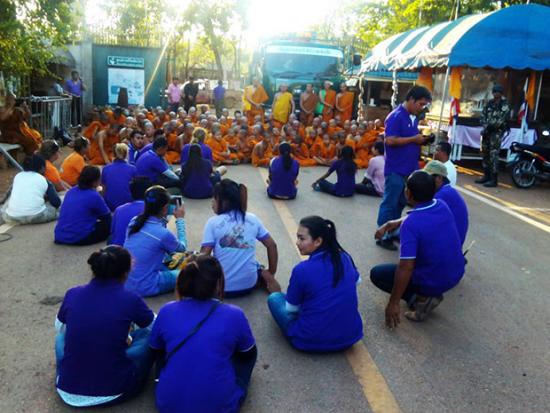 Monks at the “Tiger Temple” in Kanchanaburi block the main gate to stop forestry officials from taking away six Asian black bears they claim are illegally owned by the temple. PIYARACH CHONGCHAROEN

Channel 3 has just reported that the situation at the temple remains tense as the abbot is still refusing to allow forestry officials to leave with the six bears. About 400 military and police officers are at the site to keep order. The animals are said to becoming increasingly agitated due to the hot weather and being confined in such a limited space. Thai PBS says that forestry officials are planning on completing the move within the day, but did say how this was going to be done. 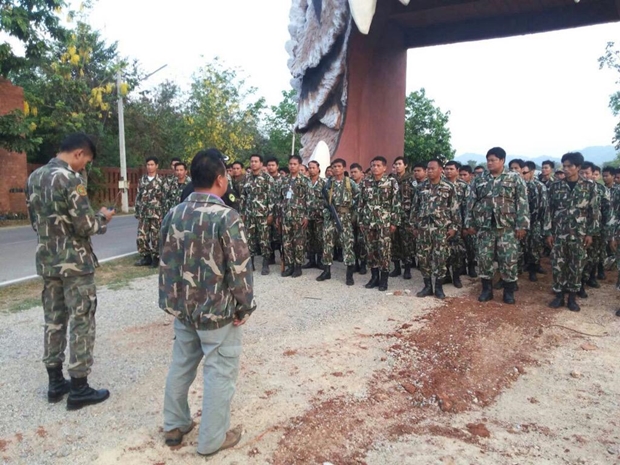 Reinforcements arrive at the temple early this morning. Twitter photo via @EdwinWiek

The standoff continues this morning, reports Edwin Wiek, founder of the Wildlife Friends of Thailand (WFFT) through his twitter account (@EdwinWiek). Authorities have sent reinforcements, but as of mid-morning, forestry officials and the bears have not been able to leave the temple.

KANCHANABURI — About 100 monks and disciples at the famed “Tiger Temple” have blocked the gates to prevent forestry officials from leaving after they seized six protected Asian black bears said to be illegally possessed by the temple.

A team of about 70 military officers, police, veterinarians and officials from the Department of National Parks, Wildlife and Plant Conservation (DNP) raided Wat Pa Luangta Maha Bua Yannasampanno in Sai Yok district on Thursday afternoon. They had a court search warrant to examine bears found in cages at the temple a day earlier.

Somsak Phupetch, director of DNP’s wildlife crime suppression unit, said monks and staff at the temple were uncooperative when the team visited the temple to investigate the case of three missing tigers on Wednesday. That was when they discovered the black bears.

Mr Somsak said the temple failed to show official documentation for the bears and staff refused to unlock the cages that housed them. The team had to use cutting tools to seize the animals after shooting them with anaesthetic darts. 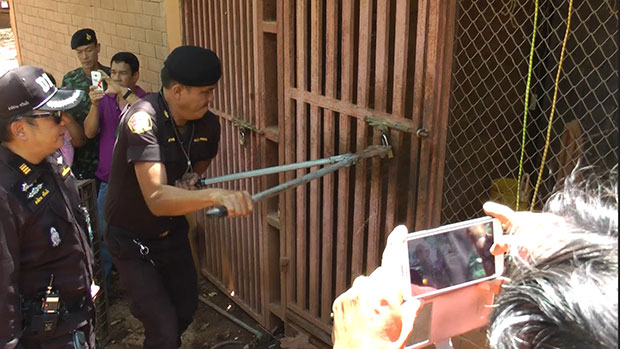 DNP officials break into the cages holding the bears after temple officials refused to open them. PIYARACH CHONGCHAROEN

Phra Vissuthisaradhera, the abbot, then led about 100 monks, staff and disciples to block the main gate at about 6pm to prevent the officials’ truck carrying the bears from leaving. They placed metal barricades across the gate and sat on the ground, demanding that the officials return the bears before leaving the premises.

The situation became tense as the number of protesting monks and followers grew later in the evening and neither side would back down.

At 9pm, Kanchanaburi deputy governor Boonyapat Chatara-urai arrived at the temple to mediate, but failed to end the stand-off as the monks continued to insist that the officials release their bears.