From private jets to multi-million dollar donations from corrupt businessmen, Thailand's monks are being criticized for increasing commercialism. 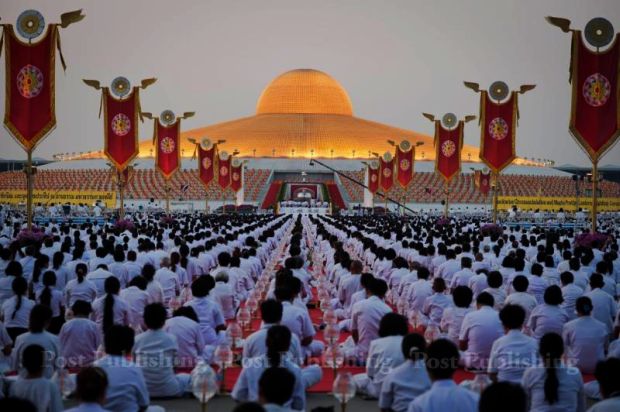 A religious ceremony at the Dhammakaya Temple in Bangkok on the occasion of Makha Bucha day. In deeply religious Thailand, monks have long been revered. But badly behaved clergy, corruption scandals, and the vast wealth amassed by some temples has many asking if something is rotten at the heart of Thai Buddhism. AFP PHOTO / Nicolas ASFOURI

In deeply religious Thailand, monks have long been revered. But badly behaved clergy, corruption scandals, and the vast wealth amassed by some temples has many asking if something is rotten at the heart of Thai Buddhism.

From selfies on private jets to multi-million dollar donations from allegedly crooked businessmen, Thailand's monks are coming under increasing fire for their embrace of commercialism.

So much so that even the military junta is threatening to intervene.

In Wat Hua Lumphong, a temple in downtown Bangkok, garlands of banknotes flutter in the breeze as trader Sakorn Suker slips a 20 baht note ($1) into an urn.

"It makes me feel good, boosts my health and makes me do better business," Suker told AFP.

His donation entitles him to take a "lucky" floating candle in the shape of a flower.

Nearby, coin-operated machines -- similar to jukeboxes, but with a Buddha statue on top -- churn out "lucky numbers" for the faithful as kneeling devotees hand over envelopes stuffed with cash, many picking up a tax reduction certificate on their way out.

In one corner of the temple complex sits a monk in an air-conditioned box.

THE GIFT OF GIVING

In contrast to the increasingly empty pews and coffers of many European churches, temples remain a boom business in Thailand.

The overwhelmingly Buddhist nation is one of the most generous countries in the world, according to the 2014 World Giving Index.

It came third globally, behind Myanmar and Malta, with 77 percent of the population giving money to charity.

Temples are under no obligation to declare their assets, which makes guessing how deep this generosity runs difficult.

But last year the National Institute of Development Administration (NIDA) estimated the country's 38,000-odd temples receive between 100 and 120 billion baht in donations ($3.07-3.62 billion) every year.

And that's on top of their state funding. In 2015 the government has earmarked $113 million alone for renovating temples.

Donations have always formed the bedrock of Thai Buddhism. Every morning barefooted monks make their daily alms rounds in their local neighbourhoods.

But as the Southeast Asian nation has modernised, so have donation methods.

Few have mastered modern money collection techniques better than the Dhammakaya temple, one of the richest in the kingdom, with dozens of outlets worldwide and an enormous headquarters north of Bangkok.

It is renowned for its roster of wealthy patrons and even boasts a slick TV channel where -- much like evangelical mega churches -- pleas for devotees to reach deep into their pockets are never far away.

But with wealth comes controversy.

Earlier this month the temple authorities returned some $20 million given by a company executive who has since been accused of embezzling the cash.

It was just the latest in a list of scandals involving Thai clergy embracing excess -- the most infamous of which involved celebrated monk Wiraphol Sukphol taking selfies while flying in a private jet.

Other embarrassing incidents in recent months include a monk arrested for multiple sexual assaults; clergy dressed in civilian [non-monk] clothes drinking alcohol and crashing a car; monks having girlfriends; and others brawling during the early morning alms collections.

Many monks feel some of their brethren, who number more than 300,000, have replaced merit-making with making money.

"Buddhism is overwhelmed by capitalism. We have become too much obsessed with the idea of getting benefits and money," Pra Maha Paiwan Warawunno, a charismatic 24-year-old monk who regularly criticises the state of Thai Buddhism on his Facebook page, told AFP. 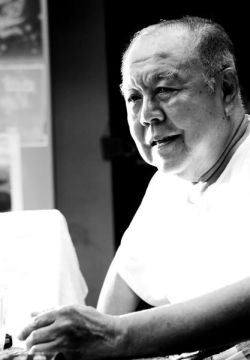 "In this country now, greed is promoted. Amulets, Buddha images, all kinds of things," said Sulak Sivaraksa, a Thai Buddhist expert and founder of the International Network of Engaged Buddhism (See here), who is close to the Dalai Lama. (See Sulak Sivaraksa's Facebook page here and Wikipedia here).

"A monk cannot even touch money. By touching money, it makes the monk impure," said Sulak, denouncing greed that he says Thailand's top Buddhist body -- the Supreme Council of the Sangha -- has failed to address.

One of the peculiarities of the Thai clergy is that -- despite the major subsidies they receive from the state -- they are also self-governing.

The Sangha -- a Sanskrit word used to describe a community of monks -- is composed of a handful of the most influential monks in the country, and they alone decide when and whether clergy should be punished for transgressions and excesses.

Paiboon Nititawan, a member of the junta's National Reform Council, has been asked to draft a new law to improve control over the temples, which has enraged many monks who see it as unacceptable interference in spiritual affairs.

"The goal is to have measures handling the properties of the temples and to get them to make proper accounts. And also to reveal the accounts to the public. So that it can be checked and balanced with transparency," he said.

"If there is no such law, monks will accumulate properties, which is against the monk disciplines," he added.

But few expect the junta to make much headway against such an entrenched group.