This is a Bangkok Post video aimed at foreign viewers and future tourists. It takes a positive, light-hearted view of the popular festival, but some of the comments from foreign viewers are not so positive. What do you think? 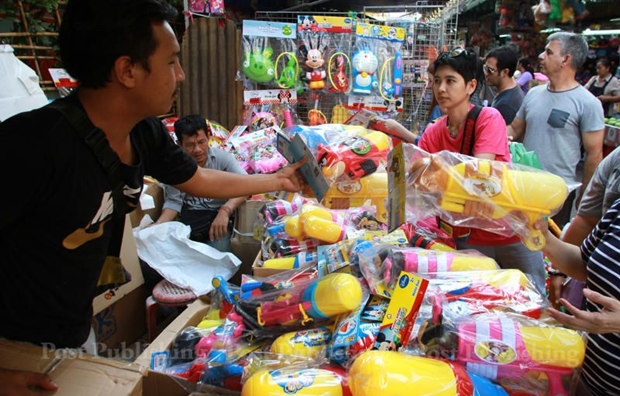 Buy your Songran weaponry today before it gets more expensive. THANARAK KHUNTON

This is a Bangkok Post video aimed at foreign viewers and future tourists. It takes a positive, light-hearted view of the popular festival, but some of the comments from foreign viewers are not so positive.

"Songkran is a derailed tradition that used to be respectful and nice, now its just drunkenness and accidents."

"Does nobody actually realise how deranged this festival has become, and that this should not be the hailed as a great event."

Watch the video. Has Songran really become this bad or is only grumpy foreigners who are commenting?

English learners: You will hear several accents in this video, not of them American like mine.

The traditional New Year in Thailand is known as Songkran and the festival takes place every April over several days of fun.

The festival coincides with many other south- and southeast-Asian country's calendars and is famous for for its water-pouring and soaking street parties throughout the country.

The water is meant as a symbol of washing all of the bad away and making a fresh start. It also heralds the commencement of Thailand's rainy season.

The traditional water-pouring is a gentle affair, but in some city streets, particularly the famous Khao San road in Bangkok, you can join in what must be one of the largest friendly water fights in the world.

As April is the hottest month of the year in Thailand, this is often the best way to cool down.

"Guys, what are you names?"

"So you're obviously well and truly into Songkran. You've got the biggest water pistols I've ever seen..."

"Well, you you know you need as much water as you can get. You don't have to keep going back for more water."

"What do you make of the whole Songkran thing."

"It's awesome. You get to go around with this huge gun and shoot people ....in the face... and other body parts. And its really good when its water

"Do you feel like you've sort of regressed to your childhood?"

"Yes, very much so. You don't get have so much fun with adults without having a fight."

Songkran is one of the major holiday opportunities in Thailand and many people return to their hometowns or provinces where celebrations are very much a family affair.

If you are holidaying in Thailand during Songkran be sure to bring a playful spirit along and be prepared to get well and truly drenched.

As the Thais figure, anyone out in public is fair game.

Youngsters from all walks revel in the spirit of Songkran and foam parties such as this one are all perfectly appropriate at this time of the year.

So safeguard all of your electronic devices, passports, cash and watches and don't worry about fixing your hair over this period as the perfectly just-left-the-salon look will quickly be past tense.

Oh, and definitely leave you new suede jacket or shoes in the closet.

Songkran is not for everyone but it is certainly one of Thailand's unmistakeably unique celebrations where one can relive their youthful exuberance and have a blast.