Tigers must leave temple by Friday

A Friday deadline has been set for the removal of 147 tigers from the famous Tiger Temple in Kanchanaburi. The abbot has resisted previous attempts to remove them and other animals kept at the temple. 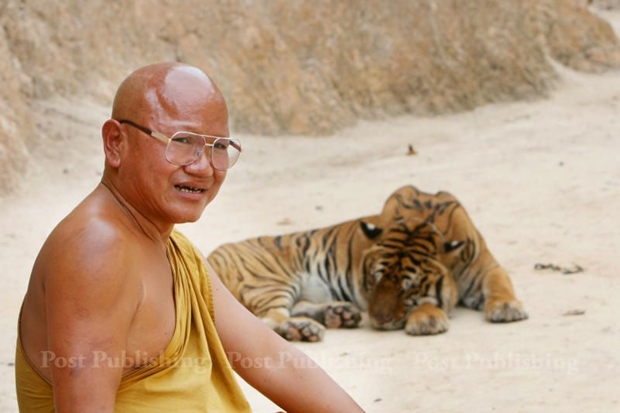 Phra Archarn Phusit (Chan) Khantitharo, or Luangta Chan, sits with one of Wat Pa Luangta Bua Yanasampanno's many tigers in a photo taken in 2008 by Yingyong Un-anongrak. The abbot has been fiercely opposed to the removal of animals from the temple in the past.

Temple must give up tigers

Wat Pa Luangta Bua Yanasampanno, known colloquially as the Tiger Temple in Kanchanaburi, must give up its 147 tigers to the Department of  National Parks, Wildlife and Plant Conservation by Friday, the department chief says.

The department first announced the seizure of 10 tigers kept at the temple about a decade ago because the temple had no permit to keep them.

He said the number of tigers has since increased from 10 to 147, and the temple has no permits to keep them. The department now wants it to hand them over.

Mr Nipon issued the order after his officials raided the temple in February due to complaints the temple was linked to wildlife trafficking and possible maltreatment of the animals. The outcome of the investigation has yet to be released.

Former department chief Damrong Pidech once tried to move the tigers to the wildlife breeding centre, but failed due to strong protests by the temple.