Two stories from lucky survivors of the earthquake and avalanches in the area of Mt Everest, one from a diving business owner in Thailand and the other from an AFP photographer. 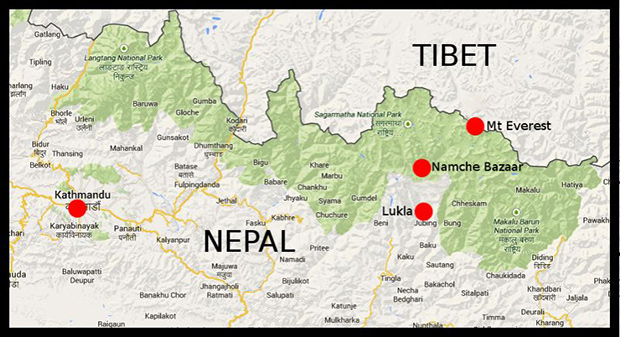 Here are two stories from survivors of the earthquake and avalanches in the area of Mt Everest. The first comes from Ben Reymenants the owner of a Rawai diving business who was trekking in the higher regions around Mount Everest with his wife Simone:

He talked to the Phuket News by iPhone yesterday. He said the earthquake occurred about 12:15 on Saturday.

"We were at 5,000m (above sea level) in a snowstorm and we nearly fell off the mountain.

"When everything started shaking, we took refuge in a small teahouse. At first, we thought it was the storm growing in intensity, but then we were horrified to see cupboards toppling over. We realised the Nepalese staff had left the teahouse.

"We quickly grabbed one backpack containing our survival equipment and took shelter. Rocks tumbling down."

Nine hours later, scrambling through rock piles and landslides, they started to realise the scale of the damage.

Houses had been flattened, yaks – the local equivalent of the buffalo – had been pulled off the mountain and the earth kept rumbling. Ben and Simone took refuge for the night in the dining area of a lodge, being woken several times by the aftershocks.

The second big aftershock was at 1pm on April 26 in Namche Bazaar.

"We had finally found a hostel that was intact. As we were checking in on the third floor, the building started swaying and bricks began falling from all sides. We flew down the three flights of stairs, trying to keep our balance on the rocking staircase, dodging falling bricks. 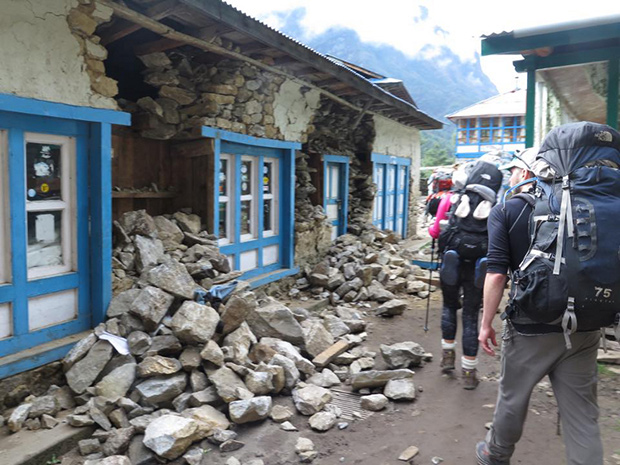 Collapsed walls in Phakding, between Namche Bazaar and Lukla. (Photo by Ben Reymenants for Phuket News)

"Back on the street, the situation was worse. We were trapped between two collapsing buildings, with no place to run to. But we knew we had to keep moving fast. We passed grassy areas where people had gathered, waving helplessly to the helicopters overhead, but they were flying to Everest Base Camp where an ice avalanche had buried dozens of climbers.

"We had to run with 25kg backpacks between the aftershocks. Basically that's what we've been doing for the past 48 hours. We hide and then we run.

"There is no help here. It's like a war zone. We have spent 22 hours walking through a disaster zone. We felt that we were so very lucky.

"There were no supplies. We managed to get some soup and luckily carried a lot of survival food and a water purifying system. We still had to run out into the open several times a night during aftershocks."

Monday afternoon (April 27), the couple reached Lukla, a small town  used as an access point for Everest climbers, so has accommodation and an airstrip.

Simone, exhausted, can go no further for the time being. Ben said, "We're stuck in Lukla, high above Kathmandu.

A day earlier Roberto Schmidt, AFP South Asia photo chief, was also in Lukla where he recounted his near-death experience at a nearby Everest base camp.l 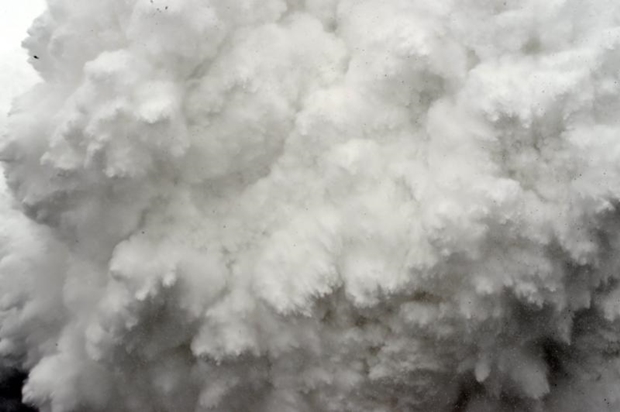 Minutes after arriving at the Mt Everest base camp on April 25, 2015, Roberto Schmidt looked up to see a cloud of snow and debris triggered by an earthquake flying towards him, moments ahead of flattening part of the camp in the Himalayas. AFP PHOTO/ROBERTO SCHMIDT

"We had just arrived after a nine-day trek. We hadn't been there more than 10 minutes we just felt this rumbling, this moan. Ammu (Kannampilly, AFP's Kathmandu bureau chief) said to me: 'What's that?' I said it's the earth moving, it's an avalanche.

"I grew up in Colombia where we used to have many tremors but never heard anything like this.

"We went out of the tent and then we heard this most horrifying sound. It was like a train but came from so deep, just so powerful.

"It was so cloudy, Ammu went into the tent and I remember looking to my left and suddenly saw this, this wave, with the rumble and I just thought 'holy shit'. It was so big, the pictures don't really do it justice.

"I grabbed the camera, just pressing the shutter, I got three shots and then it was right over us. I jumped in and went under the table.

"You have this wind and then it's like a wave crashing, we were swept up, you don't know if whether you are upside down or what. You are just tumbling. 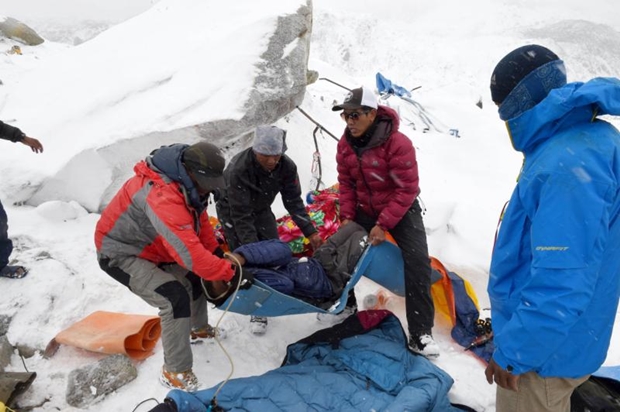 Rescuers help a porter onto a makeshift stretcher after he was injured by an avalanche caused by an earthquake, before being evacuated to a medical tent in another area of Everest Base Camp. AFP PHOTO/Roberto SCHMIDT

"Finally I came to, resting on my back and then I felt this tack, tack sound of falling rocks and you know I just felt 'this is it. I'm going to be buried alive'.

"They kept on piling on top of me and then finally there was this stillness, this complete stillness, and I knew I was alive. I knew I was conscious and I had to work out how I was going to breathe.

"You're trying to clear everything away, trying to get some air... and then suddenly I felt this hand pulling me up and it was our sherpa Pasang.

"Ammu was bleeding and the nail on her left hand had been completely torn off.

"We were lucky as I think our tents were next to a rock which stopped us from being completely swept away.

"I said I need to find my camera and he just handed it over to me, encased basically in a block of snow. The camera was fine, the lens wasn't even broken. Nepali men carry the body of an earthquake victim towards a helicopter to be evacuated from the northeastern Nepali town of Lukla on April 28, 2015. AFP PHOTO/ROBERTO SCHMIDT

"We went out of the tent and people then started appearing out of the blue, all very dazed. I started shooting and then you think, should I be taking pictures or helping people?

"In the next hour, you could hear more than half a dozen other avalanches in the vicinity. They were close but you couldn't see them as it was so cloudy. The sound was very scary, very haunting, you didn't know if it was coming your way.