One stage in the building in China of a 57-floor skyscraper in 19 days at the rate of 3 floors per day, released in a time-lapse video. (Source: YouTube)

The building in China of a 57-floor skyscraper in 19 days at the rate of 3 stories per day has been released in a time-lapse video.

The time-lapse video shows the building steps speeded up to make them easier to understand:

The new building, named Mini Sky City, is located in the Hunan provincial capital of Changsha and has 800 apartments, office space for 4,000 people and 19 atriums. 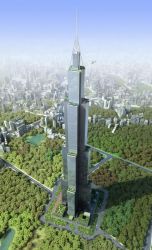 Artist's drawing of Sky City. Planned to be the world's tallest skyscraper at 200 floors (Source: Wikipedia).

The building was assembled using a modular method. 2,736 modules were built in a factory over a four-and-a-half month period before construction began. These blocks were then assembled during construction.  This method has also been used to assemble high-rise apartment blocks in the UK and the US.

Construction took place in two bursts interrupted by bad weather with the first 20 floors completed last year and the last 37 floors in January and February this year.

The pre-fab structure is cheaper to build (using less water and concrete), safe and earthquake-proof but obviously cannot meet all personalised demands because it is prefabricated.

The company's next project is to build the world's tallest 200-floor skyscraper in Changsha, called Sky City, in three months.