Furiously angry tourist guide in China caught & punished for threatening tourists because they did not buy enough, in viral video viewed by over 35 million in China. 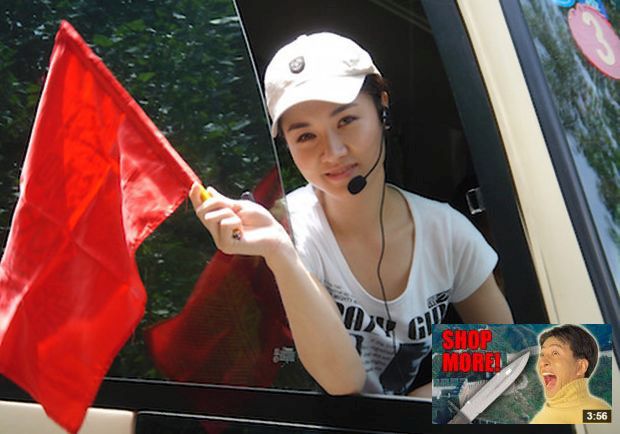 The job of tourist guide is a high-stress, high-stakes occupation in China. (Source: Sina Weibo & YouTube)

A recent incident in China provides a lesson of sorts to future tourist guides.

In a viral video that racked up over 35 million views in a couple of days, a Chinese tourist guide in Yunnan is furious at the tourists in her group because they did not spend as much as she wanted. She yelled at them for almost five minutes as the tourist sitting next to her secretly recorded her whole embarrassing rant on video, later posted to YouTube:

The incident took place on April 12th when tour guide Chen Chunyan abused tourists for over 4 minutes, accusing them of being immoral, having no virtue and without conscience, as she ranted:

"Three or four people only bought a 1000 RMB [160 US dollar] bag,... you will get what you deserve. Do you even have a conscience? If you really don’t have any morals, then karma will come and get you…if you only buy a 1000 dollar bag, then what did you come here for in the first place!?... I've invested four days, I have parents and children. If you don’t spend money, don’t you question your own morals?...  If you don’t spend at least 3000 to 4000 dollars, your return trip will be cancelled."

The tour stopped at several places to shop including pearl and jade shops.

To combat the problem of tour guides forcing tourists to buy lots of things, the local provincial government in Yunnan has set up a code of conduct called the "15 rules" (十五不准) but these rules have not stopped incidents such as this from happening.

Chen later repented and claimed she had been "impulsive," but said since her income was completely based on how much money tourists spent during their tour she was forced to pressure tourists into buying things, so she also had a grievance.

Chinese netizens were furious about what happened and suggested that low-cost tour groups that rely on kickbacks for making money should be banned.

In the end, Chinese authorities decided that the ‪tour‬ ‪guide‬ who yelled at the tourists for not shopping enough would have her tourist guide license revoked and the ‎travel‬ agency she worked for would be suspended and pay a fine of $3,222.

An apology with 500 yuan ($81) in compensation was paid to tourists in the group. 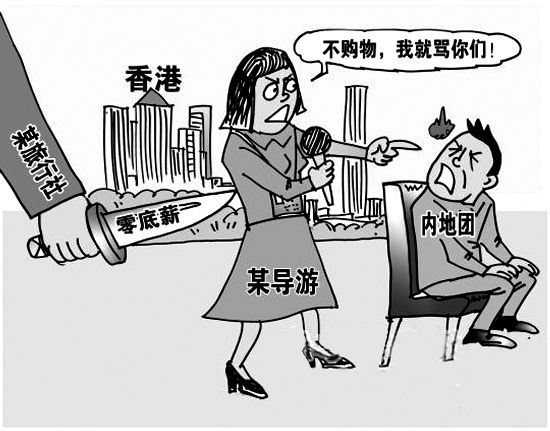 Translation: "Don’t shop and I'll scold you!" screams a tour guide while a travel agency holds a "zero base salary” knife to her back (Source: ChinaSmack.com).