Boat people pushed out to sea by Malaysia & Indonesia

ASEAN refugee crisis quickly growing worse, with 1,600 boat people pushed back to sea & thousands more at sea for months with many more boats expected in near future. 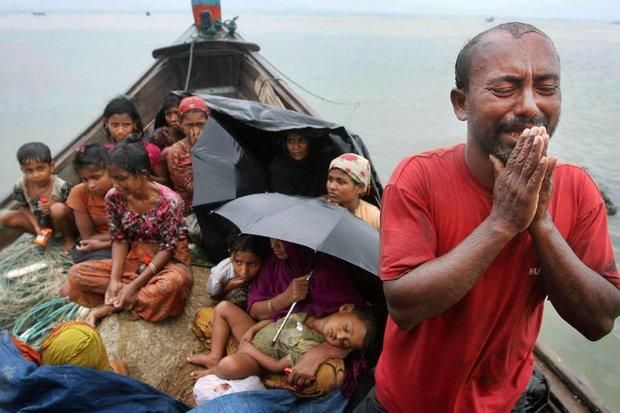 A Rohingya man pleads with authorities as families try to shelter on a typical boat used by migrants to escape the Bangladesh-Myanmar border area. Indonesia and Malaysia have joined Thailand with a policy to refuse asylum to the boat people. (AP file photo)

LANGKAWI – Abandoned at sea, thousands of Bangladeshis and members of Myanmar's long-persecuted Rohingya Muslim minority appear to have no place to go after both Malaysia and Indonesia refused to offer refuge to boatloads of hungry men, women and children.

Smugglers have fled wooden trawlers in recent days amid fear of a massive regional crackdown on human trafficking syndicates, leaving migrants to fend for themselves.

The United Nations (UN) pleaded for countries in the region to keep their borders open and help rescue those stranded.

Unless they're unseaworthy and sinking, he said, the navy will provide "provisions and send them away."

Hours earlier, Indonesia pushed back a boat packed with hundreds of Rohingya and Bangladeshis, saying they were given food, water and directions to Malaysia -- their original destination. 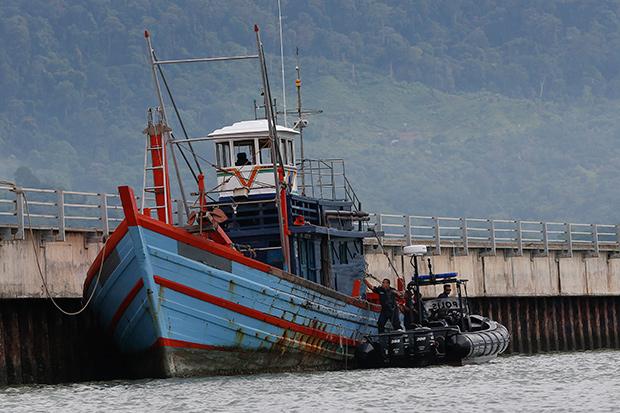 Maritime police officers near a boat which carried migrants in Langkawi May 12. Hundreds of migrants abandoned at sea by smugglers in Southeast Asia have reached land and relative safety in the past two days. But an estimated 6,000 Bangladeshis and Rohingya Muslims from Myanmar remain trapped in crowded, wooden boats, migrant officials and activists said. (AP photo)

Southeast Asia is in the grips of a spiralling humanitarian crisis, with about 1,600 migrants landing on the shores of the two Muslim-majority countries that over the years have shown the most sympathy for the Rohingya's plight.

With thousands more believed to be in the busy Malacca Strait and nearby waters -- some stranded for more than two months -- activists believe many more boats will try to make land in coming days and weeks.

One boat begged Tuesday to be rescued at Malaysia's Langkawi island, but it became clear by nightfall no help was on the way. One activist said she could hear the children crying when she got a call through to the boat.

Labelled by the UN one of the world's most persecuted minorities, the Rohingya have for decades suffered from state-sanctioned discrimination in Buddhist-majority Myanmar. Denied citizenship by national law, the Muslims are effectively stateless. Access to education and adequate health care is limited and freedom of movement severely restricted.

In the last three years, attacks on Rohingya have left 280 people dead and forced 140,000 others into crowded camps just outside Sittwe, the capital of Rakhine state, where they live under abysmal, apartheid-like conditions, with little or no opportunity for work.

That has sparked one of the biggest exoduses of boat people the region has seen since the Vietnam War, an estimated 100,000 men, women and children boarding ships in search of better lives in other countries since June 2012, according to the UN High Commission for Refugees.

The first stop, up until recently, was Thailand, where migrants were held in jungle camps until their families could raise hefty "ransoms' so they could continue onward, usually to Malaysia. Recent crackdowns, however, have forced the smugglers to change tactics --- instead holding people on small and large ships parked offshore until they collected about US$2,000.

Struggling to put a positive face on its dismal human-trafficking record, Thai authorities have discovered more than 70 former camps near its border with Malaysia, the biggest of which was found Tuesday. It appeared to be newly abandoned, well-constructed and able to house as many as 800 people, said Lt Gen Prakarn Chonlayuth, the southern regional army commander.

Dozens of graves also have been excavated, the victims believed to be Rohingya or Bangladeshi. 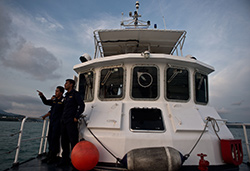 Malaysian Maritime Enforcement agency personnel gesture during a patrol along the along the coast of Langkawi Island on May 12. (AFP photo)

Spooked, agents and brokers have all but stopped bringing their human cargo to shore. And in the last three or four days, captains and smugglers have fled their ships, some jumping into speedboats, leaving migrants with no fuel, food or drinking water, survivors told The Associated Press.

In some cases, the Rohingya or Bangladeshis have succeeded in commandeering boats, bringing them as close to land as possible and then swimming the rest of the way.

On Tuesday, a boat was stranded not far from Malaysia's Langkawi island, with hundreds of desperate Rohingya, about 50 of them women, said Chris Lewa, director of the non-profit Arakan Project.

They told her by phone that their captain had fled days ago, and that they needed to be rescued.

Soon after, she heard cheers, and people on board spotted a white vessel with flashing lights. When they realized authorities weren't there to help, however, women started to scream.

"Oh! I could hear children crying!," she told AP. "It was terrible! I can hear them."

A former US Congressman urged the American government to step in.

"Immediate action is needed to rescue thousands of Rohingya before the Andaman Sea becomes a floating mass grave," said Tom Andrews, who recently returned from Myanmar and Malaysia, where he met with families of fleeing Rohingya.

Addressing the source of the crisis -- the systematic government abuse and persecution of the Rohingya -- is also crucial, he said in a statement.

First Adm Tan, of the Malaysia's maritime enforcement agency, meanwhile, said the waters around Langkawi would be patrolled 24 hours a day by eight ships. Clothes left behind on a boat that carried Rohingya migrants for three months is seen at Langkawi island, in Malaysia's northern state of Kedah, May 12. (Reuters photo)

More than 1,100 migrants have landed on the island since Sunday, the country's Home Ministry said in a statement. Of those, 486 were Myanmar citizens and 682 Bangladeshis. There were 993 men, it said, 104 women and 61 children.

For now, survivors on the island were being held in two separate holding centres, women and children in the sports hall and the men in another facility. But they would soon be transferred to a detention centre on the Malaysian mainland.

Fifteen-year-old Hasana was standing with another girl outside her temporary quarters.

She said she was an orphan, having lost both her parents when she was young, and that she told her grandmother she didn't see a life for herself in Myanmar, where it was a struggle just to get enough food to eat. The teen said she had decided to join a group of friends who wanted to go to Malaysia.

She paid $200 for what turned out to be a harrowing journey by boat, she said, describing how one man was savagely attacked just for asking for food.

Looking around her at the chaos, she now worriedly asked: "Am I going to be sent back?"