Tiger not to blame for abbot's injuries, doctor says

It was a fall, not the 300kg tiger that caused the most serious injuries to "Tiger Temple" Abbot Luangta Chan, his doctor says. The big cat only scratched his face because it was startled. 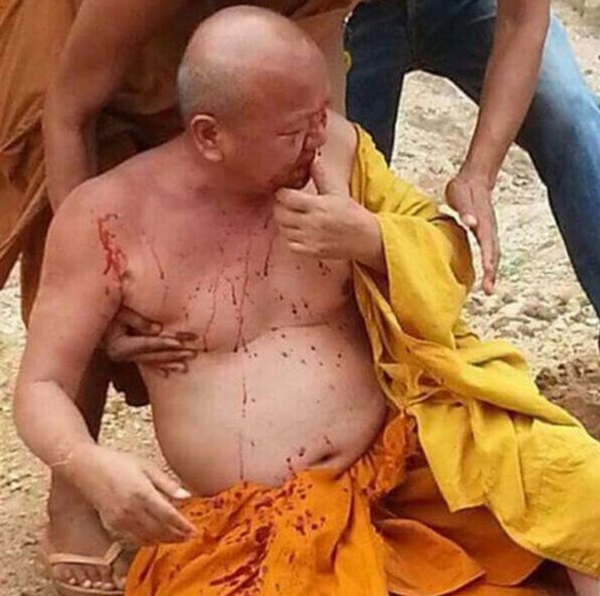 A photo taken by a temple visitor and posted online shows Luangta Chan's injuries after he was attacked by a tiger born and reared at the Tiger Temple.

Tiger not to blame for abbot's injuries, doctor says

KANCHANABURI — The tiger that mauled the abbot of the province’s renowned “Tiger Temple” (Wat Pha Luang Ta Bua) inflicted only “little scratches”, the monk’s doctor said, noting most of the 64-year-old’s injuries resulted from him falling.

Dr Sahathep Sawarngnet, director of Thanakarn Hospital, said Monday that Phra Vissuthisaradhera, better known as Luangta Chan, suffered a broken right wrist, broken upper front tooth and swelling and bleeding in the mouth in the Saturday incident. The monk also sustained scratches to the left side of his face, near his forehead.

Luangta Chan, was walking Hern Fa, a male Bengal tiger about seven years old, on Saturday afternoon when he accidentally slipped and fell to the ground, jerking the big cat's leash.

"It didn't intend to attack him at all", Dr Sahathep told AFP. adding that the abbot had relayed the story to him.

"If it was a real attack, his face would have been torn apart – but there was only a scratching line from his forehead to his lips," said the doctor, adding that the abbot broke his tooth and wrist when he fell onto the ground.

According to Dr Sahathep the tiger weighed 300 kilograms and had been at the temple for seven years.

The abbot was now recovering and would likely be discharged later this week, the doctor told AFP, adding that he was admitted to intensive care as a precaution due to his previous heart problems, appearing to downplay the severity of his injuries.

You can read our previous story here: http://www.bangkokpost.com/learning/learning-from-news/571239/tiger-temple-abbot-attacked-by-tiger