A small street-side lottery seller talks about how he makes money selling lottery tickets & coming changes to the government lottery. 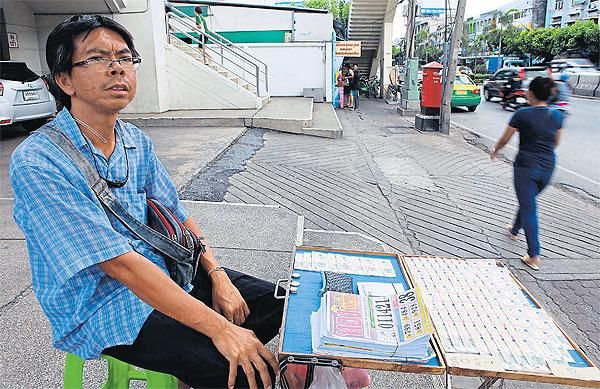 People won't pick their lucky numbers until it gets closer to the days when the numbers are drawn. Sometimes, he can only sell three tickets a day but has to come every day to make a living.

The daily life of a streetside lottery ticket seller

A lottery vendor discusses the government's new pricing and prize policies for the lottery and their impact on his livelihood.

Dacha Deesada has earned a living by selling state lottery tickets for three years. For him, every month is divided into two cycles based on when the lottery is drawn. Usually his big days are on the 1st and 16th of every month.

Two days after the lottery winners are announced, the 40-year-old travels to buy lottery tickets from a distributor on Ratchadamnoen Road, home to throngs of lottery distributors as the Government Lottery Office (GLO) was once located there.

Dacha earns roughly 15,000 baht a month, which he says is enough for him and his elderly mother. However, he doesn't know what awaits him in the near future as a government plan to cap the lottery ticket's selling price at 80 baht is set to be put into effect next month.

The government wants to solve the deep-seated problem of overpriced lottery tickets. While the standard face value of lottery tickets is 80 baht (for a pair), vendors often mark up the price that comes from the multiple distribution layers and monopolised, cumbersome quota system.

As Dacha is still on the waiting list to get a quota to buy tickets directly from the GLO, his only supplier for lottery tickets is a large distributor — or Yee Pua — who along with others, receives a combined quota of 48 million tickets from the 72 million printed monthly. He buys tickets from the distributor at 85 baht and resells them at 100 baht.

Despite the fact that the GLO has announced a reduction in the price for distributors to 70.40 baht to coincide with the 80-baht lottery policy, Dacha is certain that by the time the tickets reach him, the price will already be augmented by distributors.

"Distributors will sell the tickets to small vendors like me at 75 baht," Dacha said. "If I buy them at that price and resell at 80 baht, I will get 5 baht per ticket. I cannot do that. I cannot make a living out of that."

Today is the first day that Dacha begins selling lottery tickets. From 7am until 3pm, he perches himself near the footpath in front of Kasikornbank on Pattanakarn Soi 20 before he moves on to a market down the street until 7pm. With only a primary school education, Dacha started off as a factory worker. He later became a messenger at a record company before moving on to be a manager at a warehouse for 17 years until the company folded.

He spent three months hunting for a new job. Tired and helpless, he thought of starting a business, and selling lottery tickets came to mind. A friend in the same business showed him the ropes.

"At first, I diligently got on bikes and rode around different neighbourhoods to sell lottery tickets," Dacha said. "But I quit after six months because it was too hot." 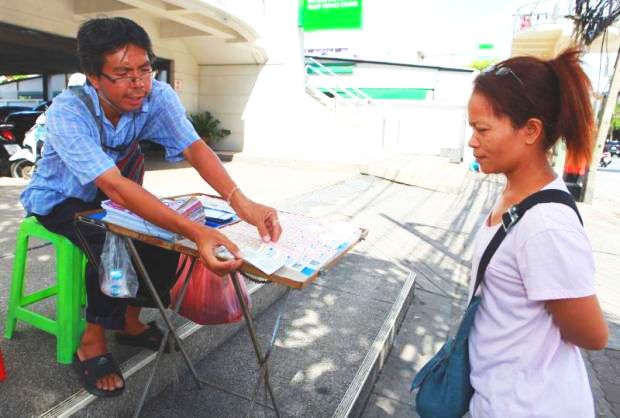 Here comes the quiet period for almost all lottery vendors, including Dacha. He says that people won't pick their lucky numbers until it gets closer to the days when the numbers are drawn. Sometimes, he can only sell three tickets a day but has to come every day to make a living. When Dacha doesn't have customers, he kills time by playing a Facebook game on his phone or watching animes.

In each lottery cycle, Dacha has to sell 500 tickets. Sometimes, he enjoys a sell-out, sometimes he is left with 20-30 tickets, which he says is normal because he still makes a profit.

Displaying the lottery tickets is an art, he says, as not all numbers are attractive. "Zero," he points out, "is the number that many seem to avoid." So in order to dispose of tickets with the number zero, he staples them at the bottom of the display board because it's most reachable for babies, whose parents let them choose.

Ultimately, what determines the saleability of lottery tickets is often something beyond Dacha's control. He believes that many Thais have their own mystifying and uncanny ways when it comes to choosing numbers.

"Be it numbers from the plates of cars (license plates) that prime ministers travel on, numbers from the age of famous people who have recently passed away, or numbers that famous people come up with, there is always some kind of number circulating among card-carrying lottery buyers around the country," Dacha said. "It's always unreasonable. It's a matter of superstition. Whether my business in a particular lottery cycle will be good or bad, is mostly based on whether there are certain numbers that have gone viral or not."

The lottery vendor also has to keep himself updated on "hot" numbers so that he knows what customers are looking for. On Facebook, there are a lot of lottery-related groups that he is a member of. He also follows pages that have an updated list of popular numbers.

"Lotto players have advanced so much in a way," Dacha joked. "In the past, they might have to take rubbings from trees to get numbers, now they can get good numbers from Facebook."

Today is the busiest day for lottery vendors nationwide, known among themselves as "pre-day". Dacha extends his business hours to 9pm because it is the last shot he has at selling his remaining tickets.

The government reasons that by doing this, wealth can be shared. However,] Dacha believes that cutting the jackpot can lead to fewer lottery players.

"Poor people aspire to be rich," Dacha said. "They buy the lotto because they want the jackpot. They get excited when they hear people winning more than 30 million baht and they want the same thing. They don't want 6 million baht. They are looking forward to a prize that is bigger.

"If they want small money, they would go for the omnipresent underground lottery, which even gives a better prize for the same bet."

1st of the month:

"Today is lottery day, I have to go out at 5am," Dacha said. "I'm like a bird that has to fly out of the nest early. There's no lingering on this day. If traffic starts to get heavy, people will stop buying."

Dacha keeps selling tickets until the very last minute — right till it's time for the numbers to be drawn, which is at 3.45pm. During the event, he makes sure he keeps his ears close to the radio to listen to the broadcast. He says if he is lucky, he has a chance to win from the leftover tickets he couldn't sell.

So far Dacha has enjoyed the ride, running a business of his own and not being confined to humdrum employment. Freedom is tremendous, he says. But with the new policy set to kick off maybe within a week, Dacha has yet to process what the future holds for him.

"The happiest will be the people who have an unlikely chance of becoming millionaires at a cheaper cost," Dacha said. "The government will be applauded by the public because they are able to fix the problem.

But what they may have forgotten along the way are small people who sell lottery tickets for a living."