Seventeen countries met in Bangkok Friday to address the boat people problem in the Andaman Sea and Bay of Bengal. Immediate help was promised, but long-term proposals met resistance from Myanmar. 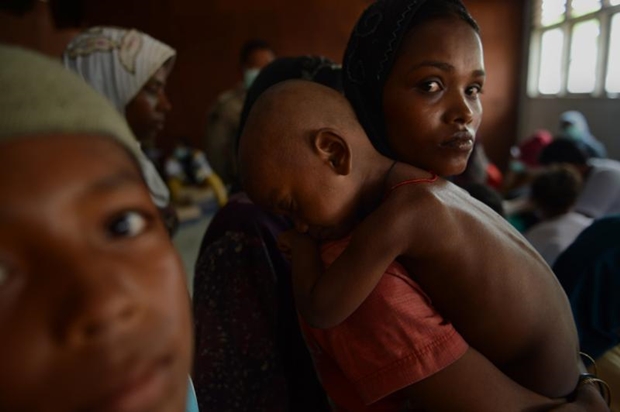 In this picture taken on May 22, 2015, Rohingya women and children register at a confinement area for migrants at Bayeun, Aceh province, after more than 400 Rohingya migrants from Myanmar and Bangladesh were rescued by Indonesian fishermen off the waters of the province on May 20. The widespread persecution of the impoverished community in Myanmar's Rakhine state is one of the primary causes for the current regional exodus, alongside growing numbers trying to escape poverty in neighbouring Bangladesh. AFP PHOTO / ROMEO GACAD 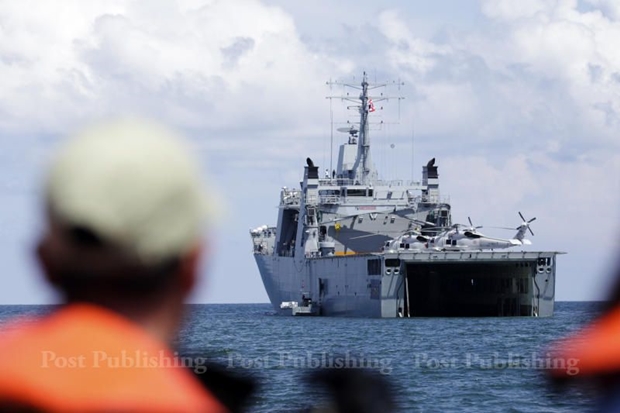 The HTMS Angthong yesterday during a drill to to provide humanitarian assistance to Rohingya and Bangladeshi migrants stranded on boats in the Andaman Sea. PATIPAT JANTHONG

As expected, the international meeting in Bangkok on the boat people crisis in the Andaman Sea and Bay of Bengal ended without mentioning the word Rohingya, acceding to the demands of Myanmar.

Still, the Thai hosts were able to describe the day-long talks as “very constructive”, saying all 17 countries at the meeting agreed on a statement to provide humanitarian help to 2,500 migrants believed to still be adrift at sea, as well as to the thousands who have already made it to Thai, Malaysian and Indonesian shores.

While there were pledges of immediate help for the refugees who have already left Myanmar and Bangladesh, statements on dealing with root causes were vague and left many in the international agencies attending the conference disappointed.

Phil Robertson of Human Rights Watch Asia, for example, called the talks “a band aid on a gaping wound”.

“The Rohingya are not even named in the statement ... how can you talk about a people if you don’t name them?”

Anne Richard, US Assistant Secretary of State for Population, Refugees, and Migration who represented the US as an observer at the meeting, was more upbeat, however, saying the meeting was successful, with serious and fruitful discussions.

Our online reporters have given their story of the conference the headline "Finger-pointing, rebukes bog down migrant-crisis meet"

That seems to be an accurate description of the conference where the even word "Rohingya"was prohibited to get Myanmar to attend.

As the story points out, however, there were some positive developments at the beginning. 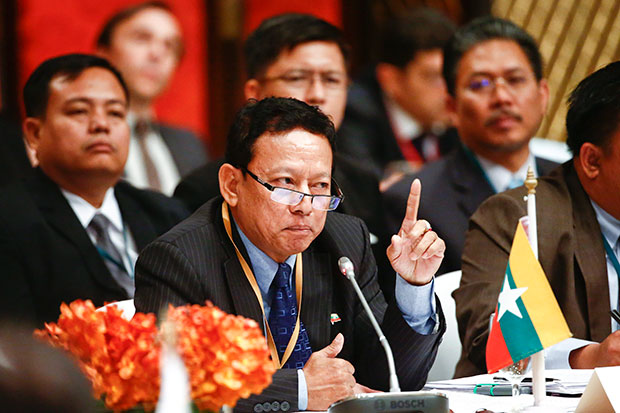 Htin Linn, the head of the Myanmar delegation, speaks at the "Special Meeting on Irregular Migration in the Indian Ocean" regarding the Rohingya and Bangladeshi migrant crisis at a hotel in Bangkok today. (AP photo)

Foreign Minister Tanasak Patimapragorn opened the morning session with a call to action, saying the influx of boat migrants had reached an "alarming level". Just before the lunch break, Gen Tanasak disclosed that Thailand had 600 newly arrived boat people in temporary holding areas in the South.

The deputy prime minister also announced that Thailand has approved a request to allow the US military to operate flights out of Thailand to search for migrants stuck on boats. So far, the US Navy flights have been operating out of Subang, Malaysia. Gen Tanasak said the Thailand-based missions can begin immediately.

Thailand so far has provided only humanitarian aid and dispatched a Royal Thai Navy task force to the Andaman Sea to act as a mobile operations base.

But "while we are trying to help those in need, we must stop the outflow of irregular migrants and combat transnational crime and destroy their networks," said Gen Tanasak, who also is deputy prime minister. "The root causes that motivated these people to leave must also be addressed."

And that is where proceedings quickly moved from hopeful optimism to finger-pointing. Volker Turk, the UN  Assistant High Commissioner for Refugees, said there could be no solution if root causes were not addressed.

"This will require full assumption of responsibility by Myanmar toward all its people. Granting citizenship is the ultimate goal," he said. "In the interim ... recognising that Myanmar is their own country is urgently required (as well as) access to identity documents and the removal of restrictions on basic freedoms."

Myanmar's delegate, Foreign Ministry director-general Htin Linn, shot back in a speech afterward, saying Mr Turk should ''be more informed'' and casting doubt on whether "the spirit of cooperation is prevailing in the room".

Myanmar has denied citizenship to 1.3 million Rohingyas and initially said it would not even attend the conference if the word "Rohingya" was used. It has consistently denied any persecution of the Muslim minority and rejects any accusation its treatment of the Rohingya is a root cause of the crisis.

"Finger pointing will to serve any purpose. It will take us nowhere,'' Htin Linn said. 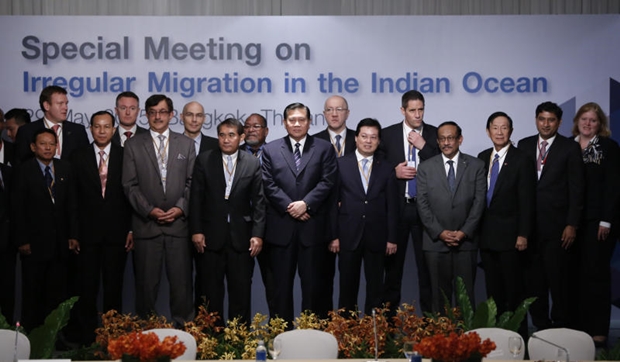 Representatives pose for a group photo at the "Special Meeting on Irregular Migration in the Indian Ocean" regarding the Rohingya and Bangladeshi migrant crisis at a hotel in Bangkok, Thailand, Friday, May 29, 2015. Apart from Thai Foreign Minister Tanasak Patimapragorn, all are below the level of minister. (AP Photo/Charles Dharapak)

The  "Special Meeting on Irregular Migration in the Indian Ocean" and thus far the many reporters from international news agencies don't seme impressed with its chances of success.

The countries attending have not sent ministers and Myanmar's delegate, according to AFP, has already rebuked the UN's refugee agency for calling on the country to recognise the Muslim Rohingya minority as citizens to stem their exodus from its shores.

On "this issue of illegal migration of boat people, you cannot single out my country," Myanmar delegation, Foreign Ministry Director-General Htin Lynn said in stern response to a UNHCR plea to address the "root causes" of the ongoing migration crisis including the statelessness issue.

Nations involved in finding solutions to the Rohingya problem are seeking a balanced approach to reduce irregular migration, the International Organisation of Migration (IOM) says.

They will address human rights issues as 17 countries convene in Bangkok Friday as part of a concerted effort to address the boat people problem in the Andaman Sea and Bay of Bengal.

IOM director William Lacy said Southeast Asian migrant issues were different from those in the Mediterranean due to the mixed driving factors, but the most urgent action needed was to bring the estimated 3,900 boat people stranded at sea to dry land.

Mr Lacy said he did not know how many come from the various refugee groups identified so far. He saw Friday's meeting as a follow-up to the May 20 meeting in Malaysia's Putrajaya and expected discussions would continue after the Bangkok meeting.

Foreign Ministers from Malaysia, Indonesia and Thailand held talks there to discuss ways to handle the mass influx of Rohingya and Bangladeshi migrants into their territorial waters. "We are here to support countries in the region including Asean and Bangladesh as well as the Bali Process," Mr Lacy said.

He said that several aspects of the problems would be discussed at the meeting particularly "the causes driving people away from home, how to give them better jobs, safety and human rights protection and improve the work of the alliance against trafficking which has not been quite successful yet".

"We expect some kind of mechanism to keep conversation going for the benefit of migrants and the nation states balancing the conundrum of national security and individual rights," said Mr Lacy, who will represent one of the three UN agencies participating at the meeting. 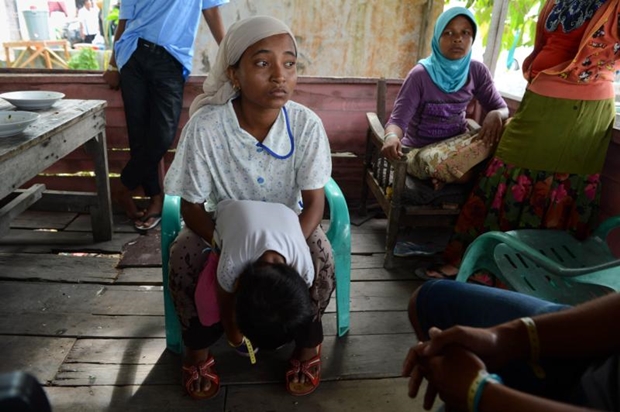 A Rohingya mother from Myanmar and her daughter Asma rest at a confinement area in Langsa port, Aceh province, following the death of Shahira Bibi, Mimi's youngest daughter who was aged three when she died on May 20, after being rescued on May 15 by fishermen in the waters off Aceh having been at sea on a migrant boat. AFP PHOTO / ROMEO GACAD

The Special Meeting on Irregular Migration in the Indian Ocean will include representatives from Afghanistan, Australia, Bangladesh, Cambodia, India, Indonesia, Iran, Laos, Malaysia, Myanmar, New Zealand, Pakistan, Papua New Guinea, the Philippines, Sri Lanka, Vietnam and Thailand, with observers from the US, Japan and Switzerland.

International Commission of Jurists (ICJ) regional director (Asia and Oceania) Sam Zarifi said any responses that emerge from the meeting should comply with international law and standards on human rights, the treatment of refugees and migrants, and people who are in distress at sea.

Mr Zarifi said Myanmar should work to scrap laws that discriminate against minorities and actively prosecute acts of violence fuelled by discrimination as well as crimes of hate speech.

He echoed calls by other UN agencies to stop arresting and putting Rohingya and Bangladeshi migrants on trial. "Thailand still views this problem as mainly one of migration and trafficking, instead of as a human rights crisis that demands a human rights-based regional response," he said.