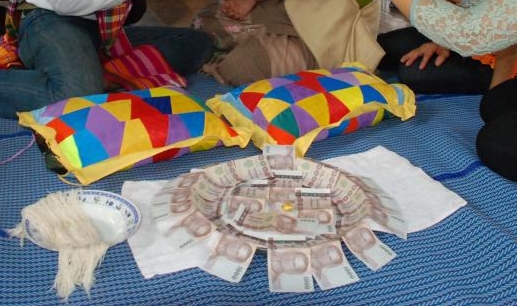 The money portion of the dowry is laid out for all to see at a Thai wedding.

Stealing for sin sot: Groom locked up at altar

A 23-year-old groom-to-be’s happy day turned into a nightmare when he arrested at his fiancée’s house hours before their wedding for stealing 100,000 baht from his boss to pay for her dowry.

Piyarat Khuleedee, an employee of an Udon Thani superstore, was shocked when uninvited guests in brown turned up with employer Suchart Surawanvijit at his 17-year-old future wife's house in Bung Kan province yesterday with wrist bracelets, not rings.

Police took from him 31,800 baht cash, three gold necklaces and a handbag.

Pol Col Phumwit Vetkama, chief of Udon Thani police, said the arrest followed a complaint by Mr Suchart, 49, owner of Save Mart, that a thief broke into his warehouse and made off with about 100,000 baht cash on May 25, Thai media reported Friday. An investigation soon led to Mr Piyarat.

Police said Mr Piyarat confessed to the theft in order to pay for his new bride's dowry, or sin sot. A 300-baht-a-day minimum wage worker, he was too poor to pay the sin sot for the girl of his dreams.

Khaosod Online reported that the 17-year-old's family asked for a dowry of 10,000 baht and one baht-weight of gold. However, he bought three gold necklaces for 12,080 baht each – one for his bride, one for her mother and another for himself to wear for the wedding. He said he also hired a taxi from Udon Thani to his fiancée’s house for 8,000 baht.

Their wedding would had been scheduled to start yesterday. Shamed at the altar, the girl burst into tears, immediately broke up with Mr Piyarat and cancelled the wedding.

Khaosod reported the girl's family had already bought an entire cow to cook up for wedding guests.

Police said Mr Piyarat had a criminal record of several thefts in Udon Thani and Ayutthaya provinces. He was convicted and served 31 months in jail before being released in November last year.