A combined force of police and soldiers arrested more than 400 street racers, many of the minors, early Sunday, confiscating 272 motorcycles in the biggest "dek waen" arrest ever. Thai PBS reports that they are likely to spend at least a week in detention before seeing their families. 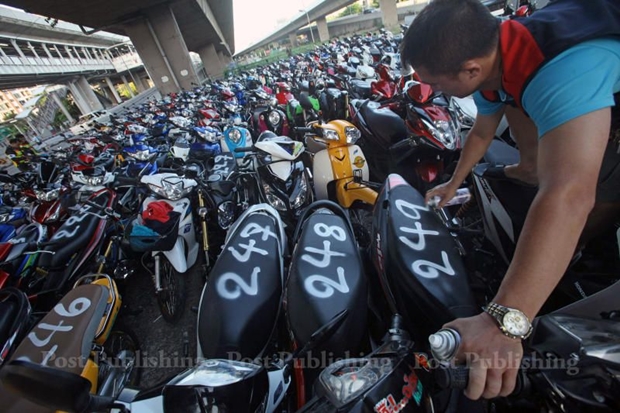 Police seized and tagged all these motorbikes after arresting 400 dek waen at a Saturday night street race in Thon Buri – the biggest such bust ever. PORNPROM SATRABHAYA

Thai PBS reports tonight that a juvenile court has denied bail to those arrested at the request of the police who want to keep them in detention for at least a week in an effort to adjust their attitudes. Their behaviour was reckless and a danger to society police said. Apparently, the earliest their parents will see their children will be one week and meanwhile they will be questioned as to why they allowed their children, some of whom were less than 15 years old, to be outside at 2am.

More than 400 motorcycle racers were arrested on Ratchaphruek Road in Thon Buri district early Sunday, in what is believed to be the country's biggest bust ever for the street racers.

The operation was led by deputy commander of the Metropolitan Police Division 8 Pol Col Wisan Panmanee. A 150-strong combined force from Talat Phlu, Bang Yi Rua and Samre police stations and soldiers from Surasi army camp in Kanchanaburi took part in the operation, supported by paramedic volunteers from the Por Tek Tung Foundation. They started moving in to make their arrests at 2am.

Police had been preparing for the operation, code-named "Ratchaphruek model to weed out dek waen (street motorcycle racers) and sao sakoy (girls on pillion riders) troubling the city", for roughly three weeks before the bust early Sunday. Officers took up positions in small sois off Ratchaphruek Road until the bikers converged. They then chased them in their vehicles with sirens going. Many racers drove to a flyover at the Ratchadaphisek-Talat Phlu intersection, but were met with a blockade of officers on the other side.

The bikers face charges for racing in a public space – with a maximum punishment of up to six months in jail or a fine of 10,000 baht – and reckless driving, which carries a penalty of six months in prison or a 10,000-baht fine. The pillion riders and others involved face charges of complicity, but their punishment would be less severe, he said.

The parents of the teen racers, many of whom turned up to collect their children at Talat Phlu station, could be charged with breaching the Child Protection Act, which involves supporting or allowing children to break the law.