Heavy rain overnight has flooded parts of Bangkok. That is a fact. Once again, however, social media users are clashing with the city governor over how effective the drainage effort has been. 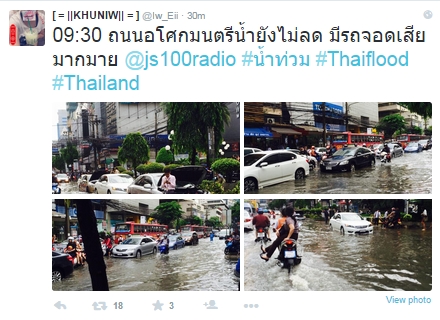 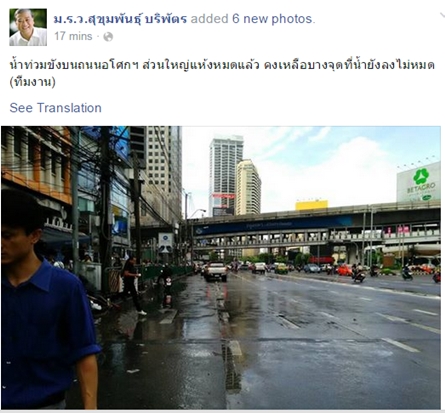 A photo from the Bangkok governor' Facebook page posted just after 9:30am says that most of Asok was now dry and only some areas were flooded.

There is a bit of a social media war going on this morning as disgruntled Bangkok residents post photo after photo of flooded streets and sois while city governor Sukhumbhand Paribatra posts photos of drying streets and the drainage efforts in full swing.

In fairness to the governor, the city was hit was by a heavy overnight downpour which left many parts of the city underwater and forcing three large schools to close for the day. The schools are Sacred Heart Convent School in Bangkok's Klong Toey district, Srinakarinwirot University and Prasarnmit Demonstration School (Elementary) on Asoke Montri Road.

The rain began before 2am in many areas, and did not let up until after 6am. Heavy thunder and lightning accompanied the storm system. Morning traffic was badly affected with commuters complaining of trips of three hours or more.

The forecast for today is for more rain, affecting sixty percent of the Bangkok area. 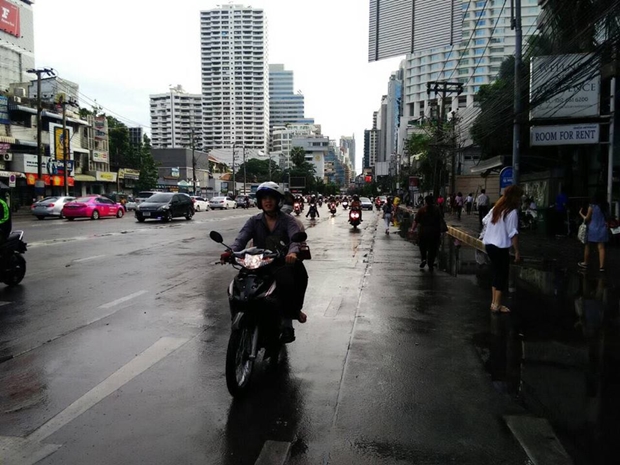 Another view of Asok from Governor Sukhumbhand. It appears that the flooding begins right at the end of the area seen in the photo. 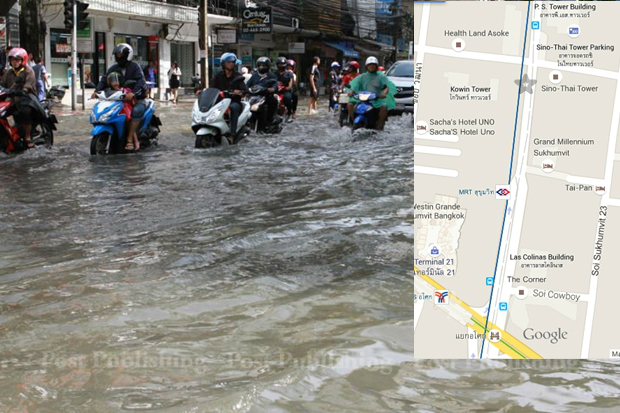 Bangkok Post photographer Kosol Nakachol took this photo about 10:30am showing the flooding opposite the Sino-Thai Tower on Soi Asok. The governor's photos, of course, were taken near the BTS system.

Bangkok's Department of Drainage and Sewerage reports that the highest rainfall last night was 134 milimetres and occurred in Taling Chan. Later reports have now said Khlong Toey received 136mm. As of 11am, about 15 flooded areas remain around the city with water levels between 5-10 centimetres.