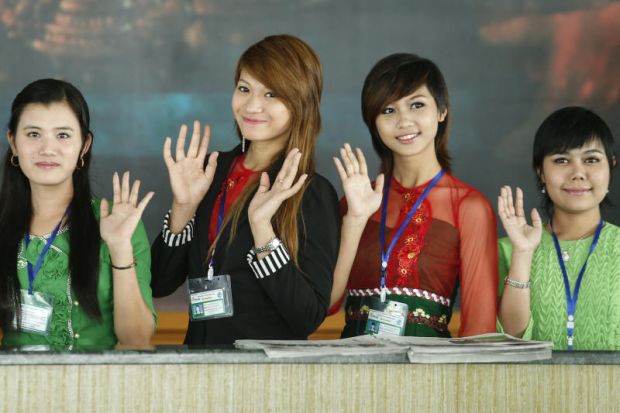 Hotel receptionists, one job in the tourism sector that requires skilled labour.

Thailand is facing a shortage of skilled labour in the cash-generating tourism industry. The workforce cannot keep pace with growth. Statistics, in fact, show the number of tourists and employees serving them running in opposite directions. The country welcomed 16 million visitors in 2010 when 6.5 million people worked in the sector. But the number of workers dropped to 6.2 million in 2013 while tourist arrivals jumped to 26.5 million. The tourism sector generated 1.4 trillion baht in revenue for the country last year, accounting for about 10% of gross domestic product (GDP). The shortage of trained workers could eventually affect the quality of service offered.

In a related story, technical colleges in Thailand produce 20,000 graduates a year, while the industrial sector needs to fill 180,000 positions. Currently, there are over 1.5 times more academic students than vocational students, with a ratio of 39:61. The Office of the Vocational Education Commission (Ovec) aims to produce students on par with academic schools by 2016, and surpass academic graduates with a 60:40 ratio by 2018.

Ovec will use a new tax reduction scheme to attract more companies to join its dual vocational education programme, in which students get work experience at companies while they study, making them more likely to be recruited immediately after graduation. The program aims to increase the numbers of vocational students to match labour market needs. Companies which join the programme can receive up to 300% tax deductions. Currently, there are 11,000 firms nationwide in the programme with plans to increase this to 13,000 companies, expanding the number of students from 79,000 to 100,000 by the end of this year.

Advertising spending in May totaled 12.16 billion baht, up 27.84% year-on-year, as digital television continued to gain momentum with growth of 891.98% in the month, according to media researcher Nielsen Thailand.

The first largest portion of ad spending was the 5.05 billion baht advertising revenue of the six analog TV channels, which accounted for 41.52% of the total. However, analog TV advertising in the month was down 7.95% year-on-year. Digital TV commanded the second largest portion of ad spending, with expenditure on ads, with the 21 digital TV channels, totalling 3.46 billion in May, and accounting for 28.47% of the total amount. For the first five months of the year, digital TV saw rocketing growth of 2,440.33% over the same period of 2014. 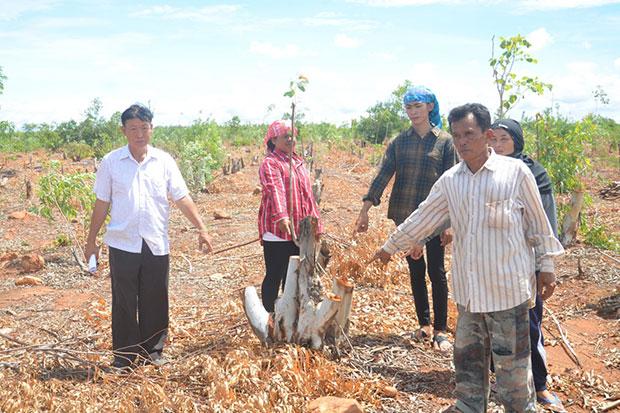 Residents in Kanchanaburi show tree stumps where a local timber yard had cut down their trees after they claim the military sold the trees to them.

The owner of a 200-rai eucalyptus plantation in Kanchanaburi says 6-million baht of his trees were cut down by a timber yard which claimed the military sold them the trees. Only tree stumps were left. The land owner, Kriangchai sae Lim, 64 aid his family had occupied the land for over 20 years and had a Phor Thor Bor 5 paper, a legal document showing tax payments for the land. The man had previously grown cassava before retiring because of poor health. He then bought the occupation rights to the land and turned it into a eucalyptus plantation about 10 years ago.

The owner said he occasionally visited the plantation and on a recent trip he spotted some men cutting down his trees. He reported this to the police and the police detained the men who cut down the trees and also seized their truck. The owner of a local timber yard, a woman identified only as Jae Nok, said she had purchased the trees from the military and would ask an army colonel to talk with him. Another resident of Kanchanaburi, Nareumol Sitthisorn, said workers from the same timber yard had cut trees in her community forest, covering some 1,000 rai.  She learned that a government agency allegedly wanted to take back land in the area to use for a power plant.

In a related story, in Phuket more than 50 residents have been told to leave their homes and move out of the area by a real estate developer claiming to have land titles for the land on which they live. Men in black uniforms (thugs) have also allegedly been sent to threaten them, demolishing homes with a backhoe and clearing the area.

According to a land survey, the 85 rai of land in dispute was originally a tin mine. However, the current residents have lived there since 2003. The real estate developer has been telling residents that this piece of land has changed hands numerous times and that he acquired it in 2008. In 2013, the developer presented a Chanote land title as proof that he is the rightful owner of the site. The Chanote was issued on December 26, 2012. Since that time, the residents have been continuously subjected to threats and told to leave. The developer has also filed an encroachment report against the residents which has been sent to court.