The defence team for the migrant suspects in the murder of two British tourists on Koh Tao won a potentially significant victory yesterday when the Samui Provincial Court ordered that forensic evidence must be sent for reexaminination. 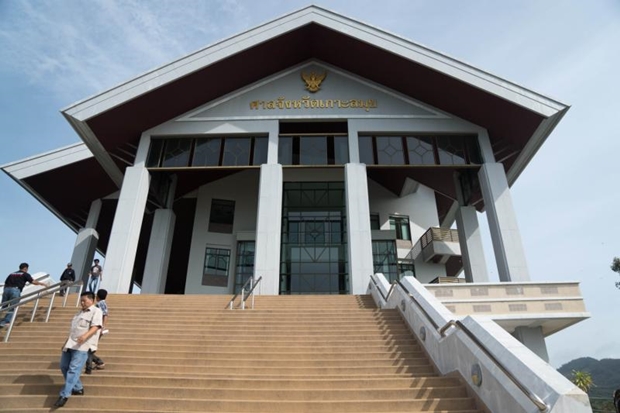 People walk on the stairs leading up to the Koh Samui courthouse on the Thai resort island of Koh Samui on July 9, 2015. The high-profile trial of two Myanmar migrants charged with killing two British holidaymakers opened July 8 on the holiday island of Koh Samui. Zaw Lin and Win Zaw Htun are accused of murdering 24-year-old David Miller and of the rape and murder of Hannah Witheridge, 23, on the southern island of Koh Tao in September. AFP PHOTO / Jerome TAYLOR

Note: I have kept our coverage in one long story because the vocabulary will be very useful to English language learners in reading other similar stories.

Be your own investigator

Nowadays, we have many sources for gathering information and in a case like this one, the twitter accounts of those at the trial can be very useful. Looking at the twitter conversations this morning, we find that the court order to retest evidence may be less useful to the defence than expected. At the moment, it appears only solid items like a hoe, shoe and bags are available for retesting. Crucial DNA evidence may have been completely used up during testing, but that still needs to be confirmed by forensic sources in Bangkok.

Here are some twitter accounts you can follow for this case: Andy Hall @ATomicalandy, @JonahFisherBBC, @jonathansamuels  Sky news, @JeromeTaylor  AFP

For the view from Myanmar, check out the Myanmar Times: http://www.mmtimes.com/index.php/national-news/15433-mistakes-continue-to-mount-at-koh-tao-murder-trial.html

Meanwhile, here is this morning's story from the Bangkok Post.

The Samui Provincial Court has ordered remaining forensic evidence in the Koh Tao tourist murders case to be sent for reexamination at the Justice Ministry’s Central Institute of Forensic Science in line with a defence request.

The court, in Surat Thani, yesterday ordered public prosecutors to work with investigators to send all remaining forensic evidence found at the crime scene, including a shovel, for forensic retesting.

A legal team sent by the Lawyers’ Council of Thailand is defending Myanmar migrants, Zaw Lin, 22, and Win Zaw Htun, 21, charged with the rape and murder of British nationals, Hannah Witheridge, 23, and David Miller, 24, in September last year.

The defence team said it has received forensic and autopsy reports from UK authorities that were “not consistent” with findings obtained from Thai authorities. Meanwhile, some media reports emerged yesterday saying certain evidence was no longer available.

Asked about the missing evidence claims, national police chief Pol Gen Somyot Poompunmuang said foreign reporters not proficient in the language might not fully understand police when they communicate in Thai.

Evidence requiring DNA testing is normally sent to the Institute of Forensic Medicine (IFM) and when the tests are finished, the results are recorded and a copy sent to police, he said.

This explained why police no longer needed to keep the DNA samples with them, he said.

The misunderstanding about possible missing evidence occurred when the defence lawyers asked to have DNA evidence re-examined by a different organisation and the police responded by saying they no longer had the evidence, he said.

“Any investigator would give a similar reply because the evidence is with the IFM,” Pol Gen Somyot said.

The BBC reported on its website yesterday that the court is expected to hear what happened to vital DNA evidence that links the two Myanmar defendants to the body of one of the victims.

Thai police had previously told the BBC how some crucial DNA evidence in the case cannot be retested because it no longer exists, said the report.

Pol Col Somkiat Kaewmook, deputy chief of Surat Thani provincial police, said: “Some forensic materials were used up in the testing process, which means they do not exist.”

“But those remaining that are solid, sizeable, and returnable will be there and we will send them to the court.”

Pol Gen Somyot said re-examination of the DNA evidence in the case is still possible.

The bodies of Miller and Witheridge were found on a beach on Koh Tao last September, sparking a major police investigation and intense local and international pressure to find those responsible. Zaw and Wai (also known as Win Zaw Htun) were arrested several weeks later.

They initially confessed to the crime but later retracted their statements.

Authorities have possession of crucial DNA evidence in the murder trial of two Burmese migrants accused of killing two young British tourists on a Thai resort island, the national police chief insisted Friday, disputing reports that it might have been lost.

``It is not lost,'' national police chief Gen. Somyot Poompanmoung told reporters in Bangkok. ``I repeat: Nothing is lost.''

Somyot called it a misunderstanding that stemmed from foreign media covering the case who might have poor Thai language skills.

Somyot said the local police investigator, Lt Col Somsak Nurod, was vague in his testimony and therefore was misinterpreted. Somsak was no longer in possession of the DNA evidence since he collected it and then sent it to the Forensics Medicine Institute in Bangkok, Somyot said.

``Nothing is missing. It's a misunderstanding,'' the police chief said.

Note: Thai PBS quoted the Thai forensics team in Bangkok as saying they were scheduled to testify in the case about 10 days time.

The forensic evidence in the case involving the murders of David Miller and Hannah Witheridge had been examined by the Office of Police Forensic Science.

The autopsy was carried out at the Police General Hospital before authorities sent the bodies back to the United Kingdom.

The defence team has questioned the reliability of the investigation and evidence used against the two Myanmar migrants. 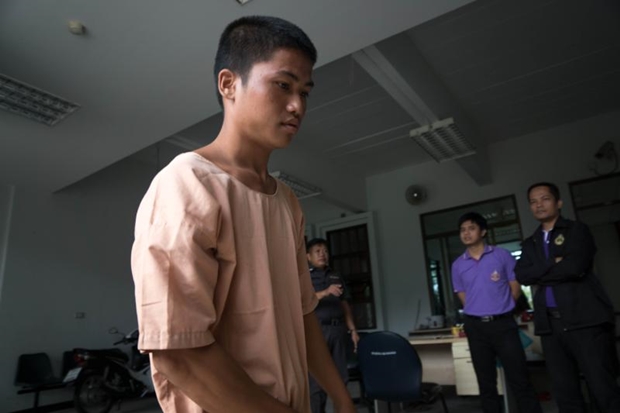 The charges carry the maximum sentence of death.

Somsak Nurod, the chief investigator of Phangan police station, appeared before the court to discuss the defence team's request, although he was not on the witness list Thursday.

The officer will reply Friday in a letter about the evidence being kept by police at the station.

But he told the court that some items had already been taken during the forensic checking process.

They included two Marlboro cigarette butts, one L&M butt and a condom. Police also had about 300 cotton buds with DNA samples of the two defendants.

A shovel, sandals and flecks of sand soaked with blood remained at Phangan station, he added.

"The DNA examination of the cigarette butts is complete.

"Of course, the items are kept appropriately," he said. "But the DNA samples taken from the bodies are not my responsibility. They are in Bangkok." 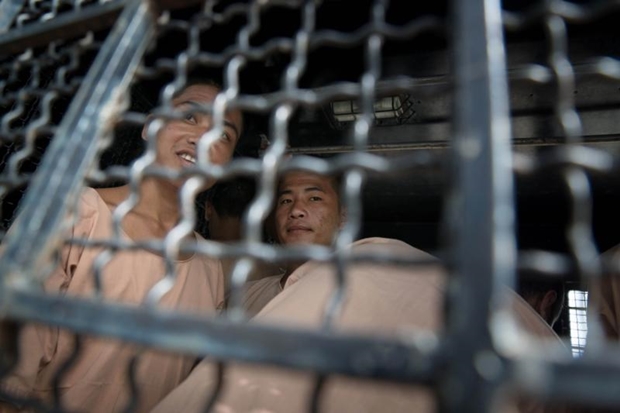 Myanmar nationals Win Zaw Tun (L) and Zaw Lin look out from a prison transport van as they arrive at court for the start of their trial on the Thai resort island of Koh Samui on July 8, 2015. AFP PHOTO / Jerome TAYLOR

Surat Thani: Defence lawyers of two Myanmar suspects accused of murdering two British tourists on Koh Tao challenged a police officer involved in the case over the reliability of his investigation as the trial opened Wednesday.

Pol Lt Jakkrapan Kaewkhao, 26, head of the Koh Tao public service centre, was the first prosecution witness to testify in the murder case of British backpackers David Miller, 24, and Hannah Witheridge, 23, on the resort island in the early hours of Sept 15 last year.

The officer identified Zaw Lin and Win Zaw Htun to the court as the accused. Later, in cross-examination, he admitted he had not been involved in such a case before.

Pol Lt Jakkrapan said he saw a body later identified as Miller's at the water's edge at Sai Ree beach in front of the King Chulalongkorn statue, so he decided to move him to higher ground. 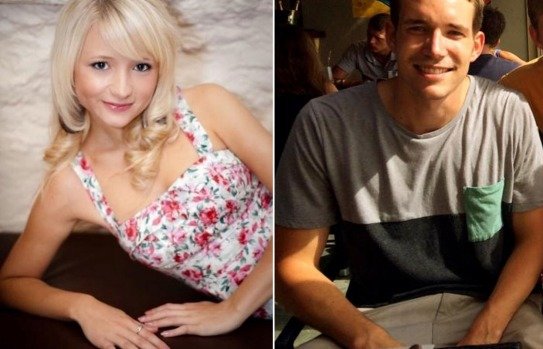 About five metres away, behind some rocks, lay a female body, later identified as Witheridge.

The woman's skirt was pulled up to her waist, Pol Lt Jakkrapan told the three-member panel of judges. Bloodstains and human flesh was spotted on the rocks.

He believed the areas where he saw flecks of blood on the sand were likely to be where Miller was assaulted.

He found a metal part of a shovel, a wooden stick, and three cigarette butts about 60m north of Witheridge.

A used condom, grey pants with a belt, a pair of canvas shoes, and a pair of pink sandals were piled neatly nearby.

The scenario backed police reports that the two might have had sexual intercourse before they were attacked and the woman might have been raped by one or more people afterwards.

The defence team then launched a cross-examination, questioning how many rape-murder cases the officer had handled.

The officer responded "none", saying he had dealt with two rape cases previously but the victims had not been killed.

Defence lawyers also asked what academic or scientific grounds the officer cited to back his finding Witheridge was raped or whether his conclusion was based purely on his own opinion.

They also asked why officers took many hours to seal off the crime scene.

Chasit Yoohat, 51, a private doctor from Koh Tao Clinic who was called to the scene, and Montriwat Tuwichean, 46, who owns a bungalow and restaurant named In Touch, who called police, also testified Wednesday.

Dozens of observers appeared in the courtroom for the opening of the trial including representatives from the UK's Foreign Commonwealth Office (FCO), London-based Amnesty International and London-based Solicitors' International Human Rights Group as well as Western and Myanmar individuals.

Defence team adviser Andy Hall said outside the court that documents received from UK authorities were inconsistent with the Thai files.

He said DNA test results did not totally match with those of Thai authorities.

The murder victims' families, who were present in court, issued a statement through the FCO saying they had travelled from the UK to Koh Samui "for the start of the trial into the horrific murders of our beautiful Hannah and David. We stand united in our grief and wish to have privacy to follow the trial."

The Witheridge family said police and the court should be allowed to do their jobs during the coming months.