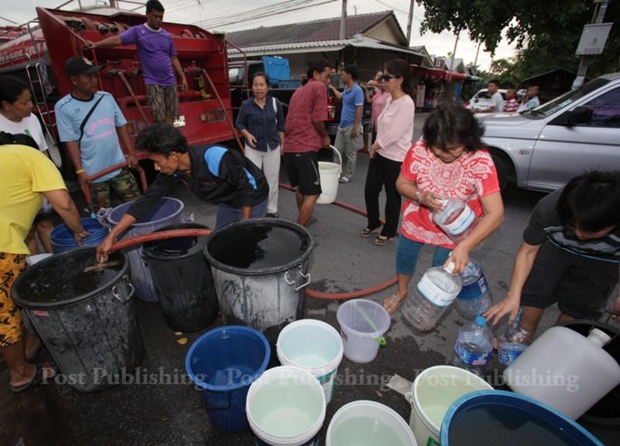 Thai PBS reports that water officials were able to restore tap water service to Thanyaburi and neighbouring districts in Pathum Thani after two days of complete dryness. A major effort to get water into Khlong Rapeepat succeeded, but locals are still worried they supply may last only days. Farmers in the area have agreed to reduce pumping to three days a week, so that should help.

Meanwhile in Bangkok, the Metropolitan Waterworks Authority has announced that tap water in six districts including Pathumwan and four roads including Rama IV will be disrupted from late Tuesday until 5am Wednesday.

The MWA said it will carry out maintenance on electrical equipment at the Sam Sen water treatment plant on Rama VI Road in Phaya Thai district between 10pm Tuesday and 5am Wednesday. As a result, tap water will run slowly during the period in the following areas:

Local administration bodies have been instructed to use water and fire trucks to deliver clean water to residents.

Residents from Khlong 5 to Khlong 15 in Thanyaburi district and everyone in Lam Luk Ka and Nong Sua districts will be affected by the suspension of tap water.

The decision was made after Khlong 13, which supplies raw water to the Thanyaburi plant, dried up.

"Pathum Thani is now suffering the heaviest drought in 30 years. All the main rivers and tributaries have dried up," Mr Pongsathorn said.

The Thanyaburi plant usually supplies tap water to more than 50,000 households in the three districts. 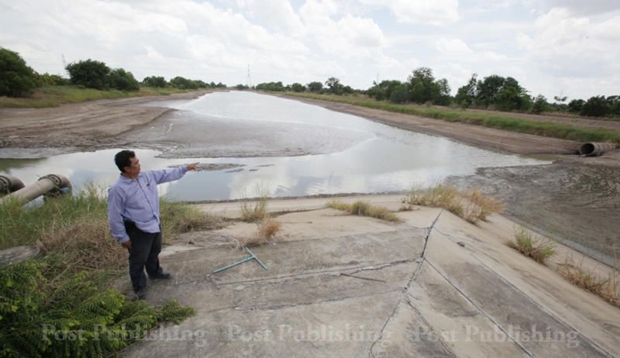 Irrigation authorities have instructed workers to speed up replenishing water supplies in Khlong Rapeepat to try to get water for the Provincial Waterworks Authority's Thanyaburi branch.

The governor said the provincial authority has asked the Royal Irrigation Department to pump water from the Chao Phraya River into canals to send water through Chulalongkorn watergate to Khlong 1 and then to Khlong 13.

Residents in Muang, Sam Khok and other districts have not been affected because plants in those areas can take water directly from the Chao Phraya River to produce tap water.

Meanwhile, residents in Lop Buri have struggled to gain access to tap water for three days after the water level in the Chai Nat-Pasak irrigation canal dropped.

The drop in the water level was caused by farmers pumping water from the irrigation canal to their crops, irrigation authorities said.

Regional Irrigation Office 10 authorities said they had submitted letters to the governors of four provinces, Nakhon Sawan, Chai Nat, Lop Buri and Saraburi, asking farmers not to use water in the canal for agricultural purposes, but it did not work.

The Regional Irrigation Office 10's chief Phanukit Dissapung said authorities are trying to replenish the water supply in the Chai Nat-Pasak irrigation canal to ensure there is enough for tap water.