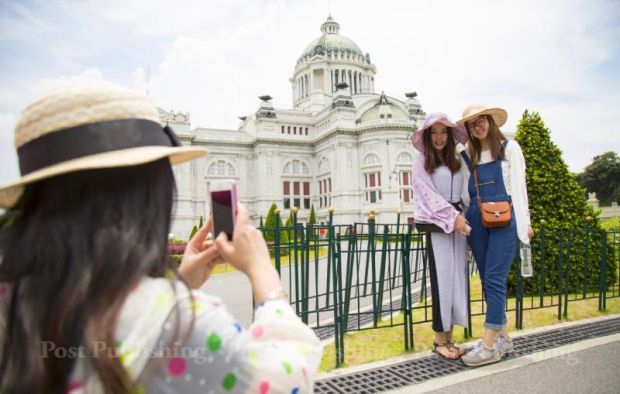 Chinese tourists taking a photo in front of the Ananta Samakhom Throne Hall (Thai: พระที่นั่งอนันตสมาคม Phra Thinang Anantasamakhom) which is "a former reception hall within Dusit Palace in Bangkok, Thailand. It now serves as a museum and is from time to time employed for certain state occasions." (Source: Wikipedia)

Chinese tourism continues to boom, with traveller numbers up 20% to 107 million in 2014 with no slowdown in sight. There is a shift in the composition of Chinese traveling abroad with Chinese tourists becoming younger, with more independent travelers as well as tech savvy and wealthier travellers.

The findings of a recent study are startling: outbound Chinese travellers could number 174 million in four years, spending US$264 billion annually, according to forecasts. This is roughly equivalent to the GDP of a whole developed country like Singapore.

The Pyramids in Egypt, Mount Fuji in Japan and the Eiffel Tower in Paris are the top three global landmarks outside China that Chinese travellers would most like to visit in their lifetimes.

Thailand is one of 10 hot spots Chinese travellers would like to visit over the next 12 months.

Thailand ranked as the ninth-most desired destination to visit and France with Australia, Japan and France, according to the latest survey conducted by the global accommodation booking website Hotels.com.

Thailand ranked second among the 10 countries for being  most welcoming to Chinese visitors. Outbound Chinese travellers rate South Korea as the most welcoming country with Japan third. 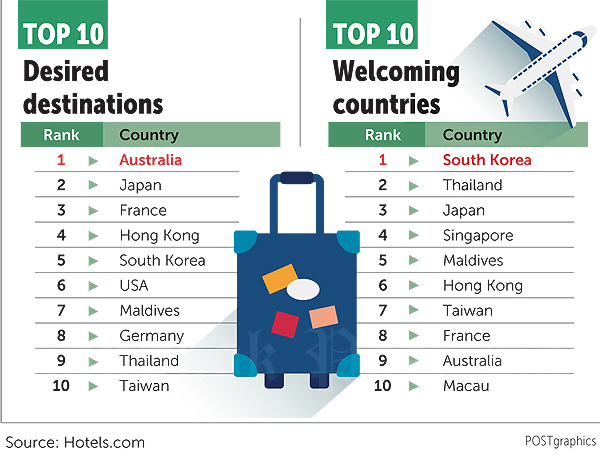 Some 80% of Chinese travellers have used an electronic device such as a mobile phone, desktop or laptop to plan and book travel, compared with only 53% last year.

Other key findings include the average total spent per day by Chinese overseas travellers in 2014 was 17,769 baht including accommodation, with most spending a lot of money on shopping, dining and sightseeing. The top 10% spenders among Chinese travelers spent over four times that amount per day, some 73,771 baht, while the top 5% shelled out 111,704 baht, over six times more than the average.