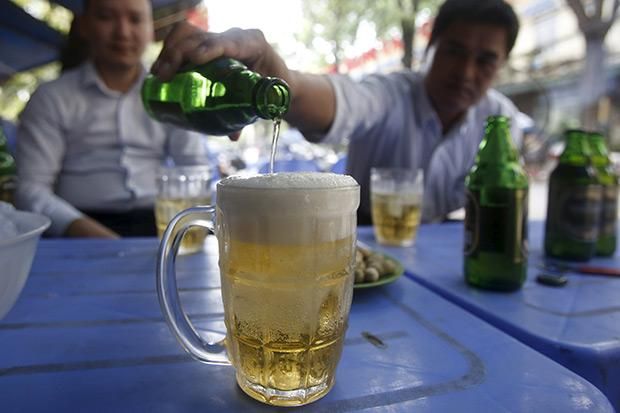 Men drink Saigon beers at a restaurant in Hanoi in this May photo. Beer sales in Vietnam have been climbing at at least double the pace of gross domestic product growth the past five years. (Reuters photo)

Thailand leading Asia in cracking down on drinking

By banning alcohol sales near universities and technical colleges, Thailand is putting the nation at the forefront of efforts in Asia to curb booze consumption.

Under amendments to the Alcohol Control Act endorsed by the government Wednesday and to be implemented nationwide late next month, bars, clubs and retailers will be prohibited from selling alcoholic beverages within a 300-metre radius of higher-educational institutions. The measures are aimed at promoting a healthy lifestyle and tackling alcohol-related problems, including underage sex, the Ministry of Public Health said.

Thailand is moving further than other governments in countering growing demand for alcohol in Asia and the Pacific, the fastest-growing beer market for brewer Heineken NV. The World Health Organization (WHO) has called for a 10% reduction in the harmful use of alcohol by 2025 from 2010 levels, implicating it in more than 200 diseases and injury conditions that the UN agency says kill about 3.3 million people a year.

"Thailand has the strongest tradition of trying to curb alcohol consumption and reduce alcohol-related harms," said Juergen Rehm, professor and chair of addiction policy at the University of Toronto's Dalla Lana School of Public Health.

The government has a taxation mechanism that "enables them to tax the hell out of any beverage which is attractive to youth," said Mr Rehm, who has worked with authorities on alcohol programmes for the past decade.

Here is one of the more extreme advertisements aimed at curbing alcohol consumption: 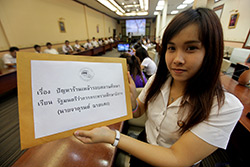 University students from the Youth Network Against New Drinkers have pushed for a ban on alcohol sales near academic institutions for years. Alcohol consumption plateaued in Thailand after the 2008 release of a national policy that helped persuade more than two-thirds of Thais to abstain from booze, WHO data show. (Photo by Thiti Wannamontha)

Vietnam, Philippines, Indonesia, China and some states of India have also introduced policies over the past few years to sap alcohol demand. Beer sales in Vietnam have been climbing at at least double the pace of gross domestic product (GDP) growth the past five years, according to Euromonitor International. Across the region, they have climbed an average of 7.7% annually over the past five years.

Anheuser-Busch InBev NV, the world's largest brewer, opened a brewery near Ho Chi Minh City in May, bolstering its supplies of Budweiser and Beck's beer.

"Asia-Pacific is now the third-largest zone of AB InBev in terms of volume, and Vietnam is considered the next turning point for us in Southeast Asia," said Michel Doukeris, the Belgian brewer's regional president, at an opening ceremony. The plant will eventually produce as much as 1 million hectolitres a year of the amber nectar. 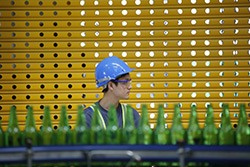 Per capita alcohol consumption averaged 29 litres in the region in 2013, compared with 59 litres in Europe and 48 litres in the rest of the world, presenting "untapped growth potential," Mr Pirmez said. The Amsterdam-based company increased its stake in United Breweries Ltd, India's biggest beermaker, to 42.1% on July 7, less than a week before opening a US$60 million brewery near Yangon.

Myanmar has no national policy or action plan to tackle alcohol and there is no legal requirement that alcohol advertisements and containers carry health warnings, the WHO said in its 2014 Global Status Report on Alcohol and Health. Worldwide, more than a dozen countries had no legal minimum age for the consumption of alcohol.

"This task of creating or strengthening a regulatory framework for alcohol turns out to be a task that countries ignore to their economic peril," said David Jernigan, director of the Center on Alcohol Marketing and Youth at the Johns Hopkins Bloomberg School of Public Health in Baltimore, Maryland. (The school was renamed in 2001 in honour of Bloomberg LP founder Michael Bloomberg, a major donor.)

"Alcohol can be a serious risk not just to health, but to development given that in much of the world it's the leading cause of death and disability for people ages 15 to 49," Mr Jernigan said. 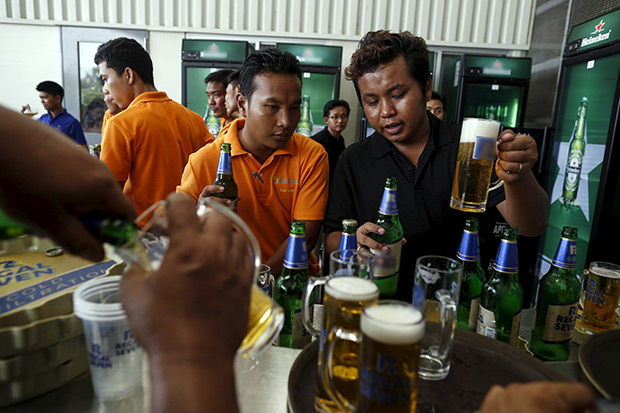 Waiters prepare glasses of beer for guests during the opening ceremony of the Heineken beer factory outside Yangon July 12. International brewers are trickling into Myanmar, betting that higher incomes and economic reforms will whip up a thirst for foreign beer. (Reuters photo)


Thailand recognised this years ago and is now considered a "model worldwide" for its ability to combine research and community mobilisation to "strengthen the national public health voice," he said in an interview.

Even still, the sales restrictions announced yesterday may do little to stop people from enjoying a tipple if they really want one, and may have a "limited" impact on sales volumes, said Philip Gorham, an equities analyst with Morningstar Inc in Amsterdam. Under existing regulations, retailers are also prohibited from selling alcohol between midnight and 11am and between 2pm and 5pm.

"I see them essentially as PR stunts by governments attempting to appear to be doing something good for public health," Mr Gorham said in an e-mail. "The broader point, however, is that developing markets are catching up on the regulatory front, or at least making efforts to."

Taxation on alcohol has been used effectively in developed country markets to limit consumption and "disruptive tax increases would be a risk to emerging market volumes," Mr Gorham added.

After growing steadily for about 25 years, alcohol consumption plateaued in Thailand after the 2008 release of a national policy on alcohol that helped persuade more than two-thirds of Thais to abstain from booze, WHO data show.

The Philippines introduced a so-called "sin tax" on cigarettes and alcohol in 2012 that's increased the price of a litre of premium beer by 22 pesos (17 baht).

India's Kerala state in August enacted a law that would put it on the path to almost-complete prohibition in 10 years...