Foreigners flee Thai stocks... but as tourists come running back 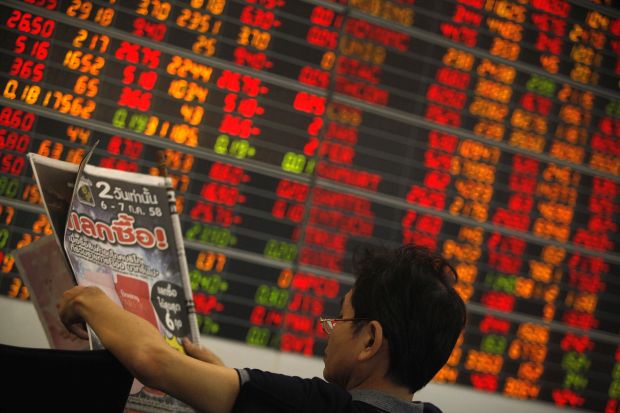 Stock investor in front of the Stock Exchange of Thailand (SET) stock board reads the financial news.

Foreign investors are selling Thai stocks at the fastest pace this year as the nation’s military government struggles to deliver on pledges to revive economic growth.

Overseas funds unloaded a net $774 million of Thai shares in July as the benchmark Stock Exchange of Thailand (SET) Index fell 4.3%. The baht is trading near the weakest level in more than six years after slumping 3.4% against the United States dollar last month.

The selloff suggests international money managers are losing patience amid falling exports, weak corporate earnings and a contraction in manufacturing. Prime Minister Prayut Chan-o-cha has failed to make much headway on planned investments in transport infrastructure, disappointing investors who had bet the projects would help kick-start Southeast Asia's second-largest economy.

"We still don’t see any bargains," said Roshan Padamadan, a Singapore-based money manager at Luminance Global Fund. "A dark cloud is hanging over the horizon," he said.

The Ministry of Finance last week cut its forecasts for exports and gross domestic product (GDP) growth for a third time this year. A factory output index has fallen every month but one since March 2013, while exports have declined each month this year. The government has disbursed less than half the 450 billion baht ($13 billion) earmarked for roads, mass transit and other infrastructure projects in the fiscal year ending Sept 30...

...Some experts say foreign outflows may abate as traders with short-term strategies may have already sold their holdings. Overseas investors with long-term strategies are the ones who still hold Thai stocks.

The government's spending is expected to come into effect from the fourth quarter this year onward and some construction companies will directly benefit from that state spending...

Thailand’s tourism sector is also getting a boost from the baht's 6.4% plunge over the past six months. The SET Tourism & Leisure Index has risen 7.3% this year, compared to a 3.8% decline for the benchmark gauge (main stock index).

Still, lacklustre earnings in the broader market are deterring investors. Profits for SET index companies grew less than 4% in the three months ended June 30, after declining for three straight quarters through March...

"Listed companies' earnings growth has been disappointing as a result of the weak economy," said Win Phromphaet, the head of investment at the Social Security Office, which oversees about $37 billion as Thailand's largest investor.