Drunk shirtless man attacks taxi for no reason, gets hit by taxi when taxi tries to escape, taxi crashes, taxi driver hauled out of taxi , beaten up by angry mob of villagers & dashboard video of incident goes viral. 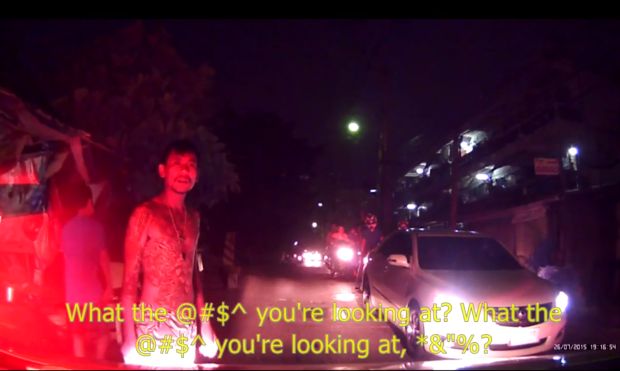 Drunk shirtless man attacks taxi for no reason, hurling obscenities at taxi driver, who was frightened out of his mind.

A taxi driver was beaten up by onlookers after his car hit an angry stranger, who later admitted he'd had a few drinks and was not happy to see the cabbie holding a mobile phone while driving.

The violent confrontation took place on July 26 on Suk Sawat Road, Bangkok, and was captured by the taxi's dashboard video camera. The video was later shared on social media and went viral last week.

Taxi driver Viroj (surname not given), aged 48, told reporters that a shirtless stranger stood in front of his vehicle and refused to let him pass. The man cursed at him, hammered on his car and demanded that he get out of the vehicle.


"The man then went away, came back with a long stick and approached my car. I tried to escape but lost control of the vehicle and it hit the man, and a house nearby," Mr Viroj said.

The driver said a group of men in the area then attacked him, breaking two of his teeth and giving him a black eye.

The cab driver complained that the other people did not even try to hear his explanation and simply accused him of a hit-and-run. It was fortunate that the dashboard video camera captured the incident, he said. Otherwise, he would have become a victim.

He said the video clip was posted online by his grandson, and added that he will take legal action against the shirtless man and the people who assaulted him.

The shirtless man, who was seriously injured when hit by the cab, was later named as Pitipong, 29.

"I saw the video clip and I'm really stressed. I want to say that this was all a misunderstanding. That day, I drank some alcohol and was having an argument with a biker on the opposite side of the road.

"I was approaching the biker, but the cab driver refused to stop and he was holding onto a mobile phone. I decided to hit his car with my shirt, but I had no intention of hurting the driver.

"I then went to get a stick to hurt the biker, but the cab driver misunderstood me. I was hit [by the taxi] and passed out. I regained consciousness in the hospital," Mr Pitipong said.

He asked the public not to comment further on the incident as all involved had to work, to make a living.

"It was all a misunderstanding," he reiterated.