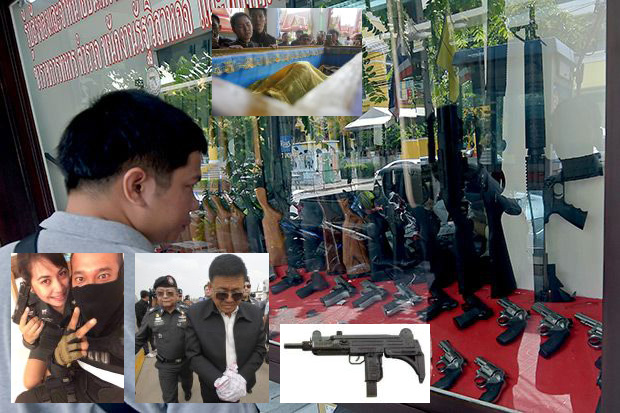 A bullet and a body: Thailand's troubling gun murders

Rungrat Rungsuwan was manning her small shop selling trinkets on a main tourist drag on the island of Koh Samui when she heard a series of loud bangs.

"At first I thought they were firecrackers," she told AFP as tourists in flip-flops and singlets filed past her storefront in the resort island's Fisherman's Village. "But once people realised it was gunfire everyone panicked and started running. Some people came into my shop to hide."

It was early March and just metres away influential local businessman Panas Khao-uthai lay dead, six bullets fired into his body at close range by two assassins who calmly unloaded their pistols in broad daylight.

For the holidaymakers forced to dive for cover that evening, the murder --- which police say was over a commercial dispute -- was a glimpse into a reality familiar to locals: the country's deadly enthusiasm for guns. 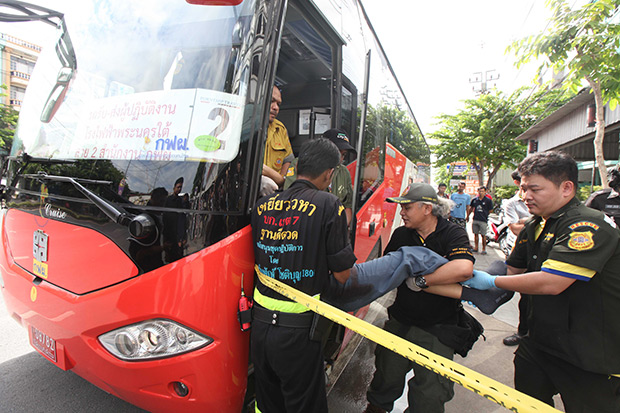 Police remove the body of a man shot on a Bangkok shuttle bus in July, allegedly because he criticised the driver’s driving skills. (Photo by Thiti Wannamontha)

KILLINGS OVER LOSS OF FACE OR BUSINESS DISPUTES

Renowned to outsiders for its laid-back, welcoming vibe, Thailand is also a country awash with firearms where disputes are all too frequently settled with a bullet and a body.

Barely a week goes by without a new headline-grabbing killing, usually stemming from a humiliation -- or a loss of face -- over a personal or business dispute.

In one recent case, a woman was shot in the neck by an angry lover in a mall, while another saw a man gunned down outside his Bangkok apartment block after arguing with a security guard.

In a third, a bus driver shot a passenger in the chest because his victim had repeatedly criticised his road skills.

As one western police officer stationed at an embassy in Bangkok told AFP: "There is a real culture of guns in Thailand, it's a military-style culture, a place of uniforms and male power."

Assessing the precise fallout of the kingdom's enthusiasm for weaponry is difficult.

The Thai government does not provide a specific breakdown for annual gun murders outside of the country's deep south, where a local Muslim insurgency has killed more than 6,400 in the last decade.

But the Gunpolicy.org website, an online database of global gun statistics run by the University of Sydney's School of Public Health, believes Thailand has one of the highest gun homicide rates in Asia.

It estimates 3.48 murders per 100,000 people in Thailand, three times the rate of neighbouring Cambodia and on par with the United States.

What is much clearer is the sheer number of weapons in civilian hands. 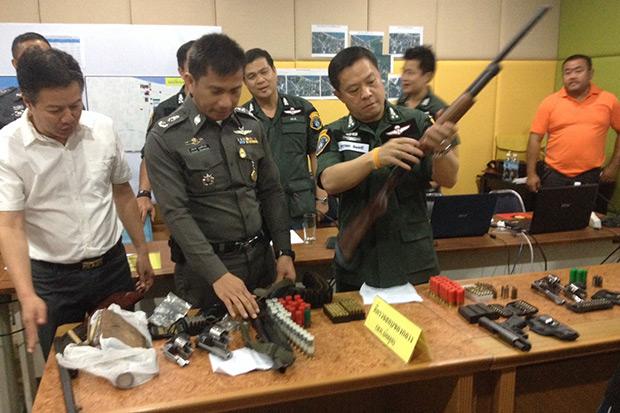 According to the Interior Ministry, there are 6.1 million registered firearms in Thailand, a country with 67 million people.

GunPolicy.org puts the total number of firearms at closer to 10 million, once the thriving black market trade is counted.

As the US State Department's Bureau for Diplomatic Security wrote in its safety report for overseas staff: "Thailand has a fervent gun culture on par with the United States and has become a world leader in firearms-related homicides."

But while the US has long experienced a passionate debate on gun control, Thailand largely greets the human toll of its firearms obsession with a collective shrug.

"No one has taken responsibility, no one has really taken up the issue," lamented Kasit Piromya, a former foreign minister who believes tighter gun controls are needed, as well as an amnesty for illegal weapons.

LACK OF OUTRAGE DUE TO CONCEPT OF KARMA

The lack of outrage shown over gun murders, Mr. Kasit believes is down to the concept of karma.

"When you die, you die. It's acceptance and resignation. We take death calmly as part of life," said Mr Kasit, who owns two registered pistols.

On paper, Thailand has strict gun controls but the law is easily circumnavigated.

"I want every gun to be registered," Pol Col Akaradet of the elite Crime Suppression Division, told AFP at the unit's Bangkok headquarters.

A key step would be for the government to set up a database containing the "ballistic fingerprints" of all over the counter weapons.

KILLERS STILL ON THE LOOSE

In late July, AFP accompanied Pol Col Akaradet and 200 of his commandos on a dawn raid in Uthai Thani, a central province renowned for its crime syndicates.

Their target were two suspects in a 2011 gun murder in which a policeman was killed. His officers took no chances, arming themselves with assault rifles, shotguns and body armour.

But by the time the convoy reached a series of mansions on the outskirts of town there was no sign of the main suspects -- although 20 guns, ammunition and bullet proof vests were seized.

The killers are still on the loose.

Back on Koh amui, an island where tourism is a crucial mainstay of the economy, police also responded forcefully to the killing of the local businessman Panas, arresting the alleged gunmen and conducting a series of raids that netted almost 100 weapons, Akaradet said.

At the streetside restaurant where the killing took place, the tables are filled once more with tourists oblivious to the violence that occurred there three months ago.

Laurent Haroutinian, the French manager of the restaurant where the shooting took place, said they reopened after just two days.

"It was the first time I saw anything like this," he said. "And I hope it is the last"