Upside-down Cambodian letters on shields of riot police in Hollywood film 'No Escape' looked strange to many, but have now led to ban in Cambodia for misuse of Cambodian culture. 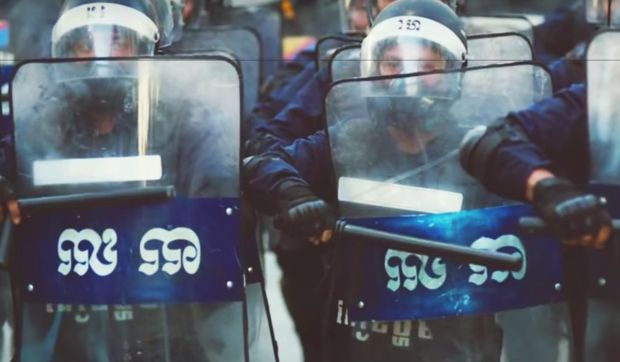 Riot police shields in the film "No Escape" shot in Thailand have offended Cambodians, leading to the banning of the film in Cambodia (Source: YouTube screen capture)

The soon-to-be-released Hollywood action film "No Escape" shot in the Chiang Mai area in 2013 will be banned in Cambodia, according to the Phnom Penh Post (See here).

It only took a viewing of the film's trailer to get the film banned.

No one really knows why the film's producers did this, but there has been a lot of speculation.

Cambodian officials apparently believe the upside-down Cambodian letters were added to make it clear that the film was not about Thailand so the film could be shot in Thailand.

However, the upside-down letters have led to yet other issues related to the misuse of the Cambodian language and culture.

After an angry reception on Facebook, the Ministry of Culture and Fine Arts stepped in and banned the film.

Scenes in which riot police clash with an angry mob might bring back memories of real-life events in the recent history of Thailand.

But some say the violent uprising in the film bears greater resemblance to the Khmer Rouge takeover of Cambodia in 1975. Although threats of "civil war" in Thailand were made prior to the 2014 coup (see mention here), the levels of violence were relatively subdued and there was never anything like the frightening summary executions under the Khmer Rouge which are also depicted in the film. There was also never any threat to foreigners or tourists during the nearly decades-long Thai protests that were brought to an end by the coup, after which peace followed. 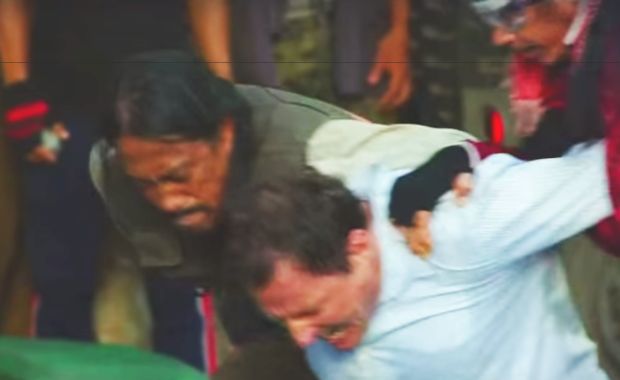 Execution of foreigner from the trailer of the film 'No Escape'.

In the film, people also wear kramas which is a Cambodian item of dress. A krama is a traditional Cambodian piece of cloth with a checkered red and white pattern used as a headcover, a scarf and even to carry children. The cloth is a Cambodian national symbol. The Thai version worn in the Isan region is known as pha khao ma (ผ้าขาวม้า) (See here). 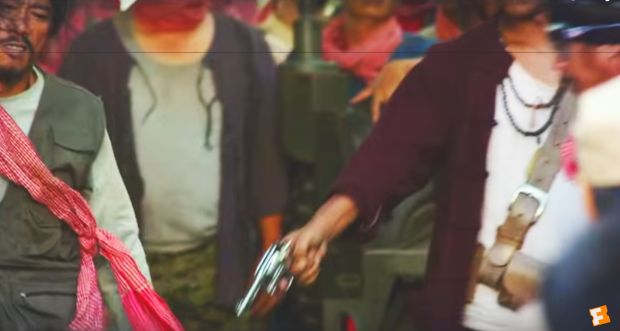 Gun pointed at head of foreigner in film 'No Escape'. Also note Cambodian Krama being worn by person on the left.

The film is about a US businessman whose family gets caught in an imaginary Southeast Asian country during a violent uprising.

Although local distributors in Cambodia won't be showing the film in cinemas, one might question how important this ban might be when most people might be able to view the film over the internet.

For more on the film 'No Escape' read previous article here. 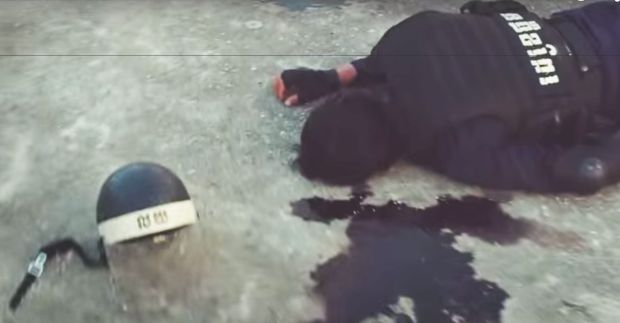 Second place in film trailer where upside-down Khmer letters can be seen, or are they right-side up?