Myanmar fighters say their boxing is tougher than Thai kickboxing because of skull-cracking head-butts & no gloves, throws, elbow & knee strikes, anything goes. 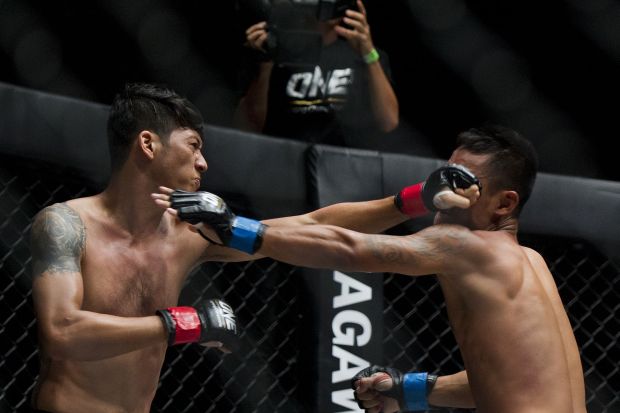 Phoe Thaw (L), a fighter in Myanmar's martial art Lethwei -- a sport that encourages head-butting and grants victory by knock-out only -- fighting during a Mixed Martial Arts (MMA) One Championship match in Yangon. Lethwei fighters say their sport is the toughest member of Southeast Asia's kickboxing family, leaving Thailand's more famous Muay Thai in the blood-flecked dust thanks to its disdain for gloves and use of skull-cracking head-butts. AFP PHOTO / Ye Aung THU

YANGON - Moe Pwint Oo shoots the grimy punching bag a steely glare before slamming her fist into it, striking a blow for equality as she practises Myanmar's martial art Lethwei -- a sport that encourages head-butting and grants victory by knock out only.

The petite medical sciences student is one of a growing number of women taking up Lethwei kickboxing, building up a sweat in the yard of a gritty Rangoon gym where some of the country's best fighters train alongside local enthusiasts, expats and even the odd actress.

"I think Lethwei is becoming really popular here because I see a lot of my friends here as well. But I am here to box not to socialise," said Moe Pwint Oo, as a woman from Japan practised spin kicks in a makeshift boxing ring behind her.

Lethwei fighters say their sport is the toughest member of Southeast Asia's kickboxing family, leaving Thailand's more famous Muay Thai in the blood-flecked [or blood-soaked] dust thanks to its disdain for gloves and use of skull-cracking head-butts. 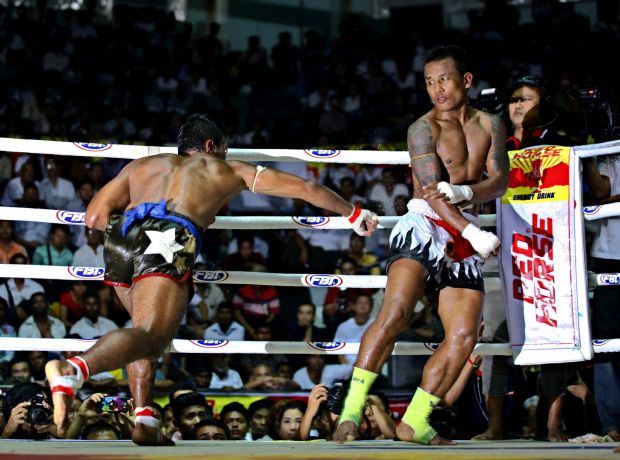 To win a Lethwei fight you must batter your opponent unconscious, or to the point where they surrender. If no one gets knocked out in five three-minute rounds, the match ends in a draw.

But that has begun to change in recent years as gender roles shift, spurred by the country opening up to the world after decades of isolating military rule.

Opposition leader Aung San Suu Kyi is the most famous of a growing number of female politicians, while an impressive roster of successful businesswomen is taking advantage of the best economic outlook in decades. 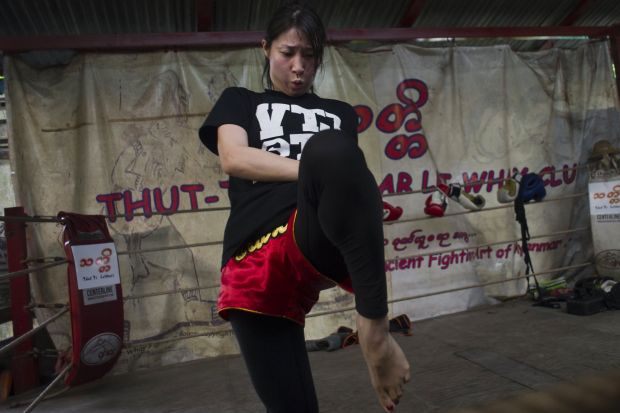 HALF THE GYM REGULARS ARE WOMEN

The flash of a naked female knee does not have quite the scandalising power it once did, with short skirts an increasingly common sight on city streets -- although most women still opt to keep their hemlines at ankle level.

Around of half of the regulars at the Thut Ti (Courage) gym are women -- drawn to the intensity of the fitness level and authenticity of skill required in Lethwei.

"It's really nice to have somebody like you here, because it's like a guys' place," said Moe Pwint Oo, gesturing at knuckles strapped with red surgical tape.

Having spent years outside her homeland, which is also known as Burma, she said she "wanted to do something very traditional, very Burmese" in her summer break from studying at Aberdeen University in Scotland. 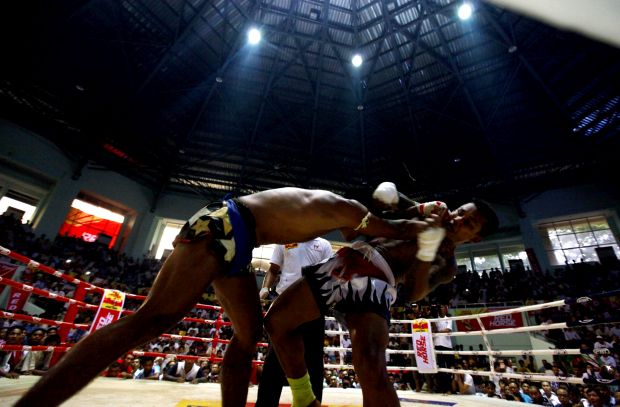 Lethwei has an ancient history in Myanmar.

Carvings on the temples of Bagan, which dot the central Myanmar plains, appear to show pairs of men locked in combat, suggesting the sport is over a thousand years old, said Win Zin Oo, founder of the Thut Ti gym, who is also a former vice president of the Myanmar Lethwei Federation.

In modern times it was kept alive in the eastern border states of Karen and Mon, where kickboxing bouts are held to mark everything from monks' funerals to New Year festivities.

Spectators in front row seats are close enough to hear bones shatter and be sporadically showered with blood, sweat and spittle... 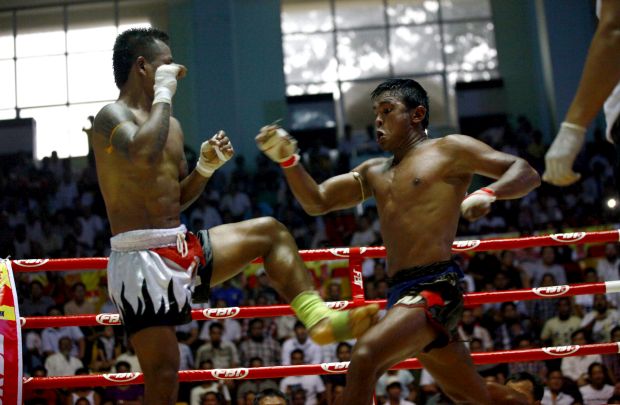 ..."All components of the body can be used as weapons; punches, knee strikes, elbow beats, head butts, you can throw (your opponent)... If you want to compete in the real Lethwei ring as a professional you must be really tough," he told AFP.

He normally advises enthusiasts not to attempt a fight.

For those who do, endurance is as important as aggression.

Lethwei boxer Tha Pyay Nyo, who has a formidable record of more than 150 matches and only one defeat, gave up farming in his native Karen state to take up the sport professionally because "I might be famous one day".

The 25-year-old recently branched out into mixed martial arts, or "cage fighting", competing in his debut international tournament as part of the first ONE Championship event in Myanmar.

The televised tournament was a chance to showcase some of the fighting spirit of a national sport that has languished in the shadow of its better-known Thai cousin.

"I want the world to know our courage through Myanmar traditional boxing," he told AFP before the match. 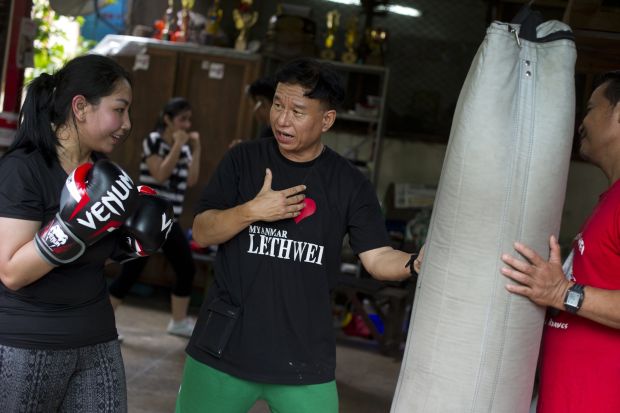 Win Zin Oo hopes Myanmar will borrow from the success of its Thai neighbours in promoting its own kickboxing brand.

His gym is increasingly popular and around half of all those training at the gym are women, including local models, singers and actresses.

He said there was some "sensitivity" about how women should be treated, but insisted the gym did not discriminate.

"Some (women) students they are really really good, even in terms of decisiveness I think. So it's a little unfair (to say) 'oh women are weak, men are strong'," he said.

When she returns to Scotland, Moe Pwint Oo will have to make do with Muay Thai, in which headbutts are banned and protective clothing is worn, to keep training.

But she said she was hooked on Myanmar's more fearsome version.

"It makes you fit, it's traditional and then you know it's very empowering, especially for women," she said. 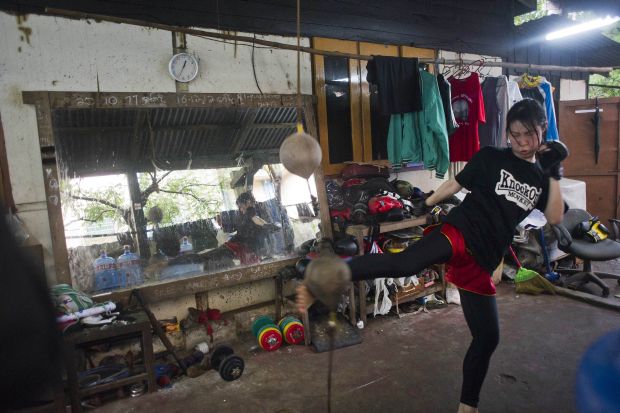