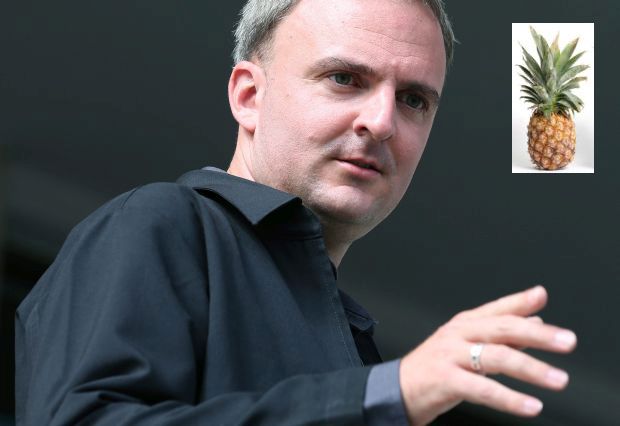 Andy Hall won the first case against him for defending migrant worker rights, but now being sued for $10 million & faces 7 years in jail on defamation charges by Thai pineapple company. 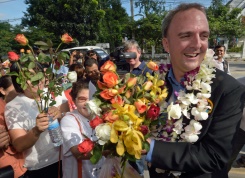 British activist Andy Hall (R) receives flowers from his supporters as he arrives at a court in Bangkok on October 29, 2014

Titled "Cheap Has a High Price" and published by the Finnish civil rights group Finnwatch, the report intensified the scrutiny of Thailand's food industry which has faced years of allegations of mistreatment of its mainly migrant labour force. (Read full report for free here).

Natural Fruit is a major supplier to the European drink market producing pineapple juice concentrate which the company has supplied to Finnish retailers SOK and Kesko as well as private label juices. The owner of Natural Fruit Wirat Piyapornpaiboon is the elder brother of the former labour minister and general secretary of the Democratic Party Chalermchai Sri-On. Natural Fruit is a powerful company in Thailand's pineapple industry as the owner is the President of the Thai Pineapple Industry Association (TPIA) (Source: Finnwatch here)

Natural Fruit has denied the allegations in the report and launched an attack against Mr. Hall with several court cases, including a civil case seeking US$10 million in damages.

Mr. Hall was acquitted by a court last year on a defamation charge pursued by the Office of the Attorney General (OAG) and the attorney general is appealing last year's acquittal adding to Mr. Hall's legal woes.

Natural Fruit has now filed a string of its own criminal and civil cases against Mr Hall, the most serious of which was accepted on Monday.

The Southern Criminal Court has agreed to hear the case against Andy Hall for defamation and violation of the Computer Crimes Act.

Mr Hall has been ordered to appear in court on Oct 19 for a plea hearing, with the court expected to decide today whether he gets bail.

Mr. Hall faces up to seven years in prison if convicted.

Mr Hall stands by his research and has accused the company of trying to detract from the report's damning findings through legal action.

Both Thailand's criminal defamation and computer misuse laws have been criticised by rights groups for their broad wording and the ease with which they can be used to stifle investigative work.

In a statement Finnwatch executive director Sonja Vartiala described the court case as "a saga of intimidation already lasting 30 months aimed at nothing but gagging a human rights defender".

LEGAL ACTION IN US & EU AGAINST THAI COMPANIES

Thailand's food industry is a key supplier to Western supermarkets and has increasingly been subject to scrutiny and sometimes legal action in Western countries that import Thai goods.

Thailand has long turned to migrants from poorer neighbours Myanmar, Cambodia and Laos to help keep major industries afloat, from fishing to seafood to food processing to construction.

Last week, a US subsidiary of the major Thai conglomerate CP Group was sued in a class action lawsuit in California against leading US retailer CostCo, which imports CP Group's fish, under a new 2010 California law acting against slave labour in the supply chain of goods exported to the US. (Read full story here)

The European Union this year threatened to place Thailand under an export ban unless more was done to tackle labour abuses.

Last month, the US maintained Thailand's low ranking in its annual ranking for countries accused of turning a blind eye to human trafficking.