More+
Bankers get 18 years in prison, no Thaksin ruling until return to Thailand
Learning
Advanced news

Bankers get 18 years in prison, no Thaksin ruling until return to Thailand 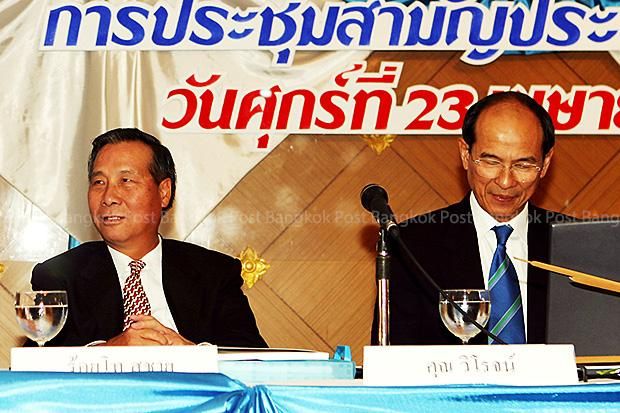 Bankers get 18 years in prison, no Thaksin ruling until return to Thailand

While Thaksin Shinawatra was serving as Prime Minister in 2003 and 2004, the government-owned Krung Thai bank approved more than 9.9 billion baht in loans to companies owned by real estate developer Krisdamahanakorn (Krisda Mahanakorn companies or KMC).

These large loans were extended even though the company was already listed with the bank as a non-performing debtor with non-performing loans (NPLs).

The loan was extended for refinancing and land acquisition, but the court found the loan was used for personal purposes.

BANK EXECUTIVES GET 18 YEARS IN PRISON

The president of the bank at the time was Viroj Nuankae, 68, and the chairman of the board was Suchai Jaovisidha.

Both bank executives were sentenced to 18 years in prison by the Supreme Court's Criminal Division for Holders of Political Positions yesterday.

Executives of a state-owned bank are considered to be officials of the state. Krung Thai bank was owned by the government and as a state enterprise was vulnerable to being used by corrupt politicians for their personal gain.

An additional 18 people involved with the loans were also given lengthy prison sentences. Lower level credit officers (loan officers) working for the bank as well as executives of Krisda Mahanakorn companies who received loans also received prison terms of 12 years each.

The convicted were also ordered to pay compensation of more than 10 billion baht to the bank.

In the past, the banker Viroj was also vice chairman of the Phatra Thanakit finance company which suffered financial problems after the 1997 crisis and was later honorary chairman of Phatra Securities (See here).

As late as 2008, Viroj looked poised for a comeback using his political connections in the Pheua Thai Party (see here). He was even the subject of a book: Viroj Nuankae: the formula of success in the business crisis (see here).

The case was initially investigated by the Office of the Attorney General (OAG), the National Anti-Corruption Commission (NACC) and the Assets Scrutiny Committee (ASC) set up after the 2006 coup.

The court case first began in 2012 when 27 people were indicted.

All defendants were accused of malfeasance in violation of Article 157 of the Criminal Code, the law on offences committed by officials of state-run agencies, the Commercial Banks Act, the Securities and Exchange Act, and the Public Companies Act.

RULING ON THAKSIN ONLY ON RETURN TO THAILAND

The NACC accused Thaksin of damaging the economy by allowing the bank to issue the loans when he administered the country.

The court will not make a ruling on Thaksin until he is back in Thailand.

The court issued an arrest warrant for Thaksin, a fugitive living overseas, after he failed to report to the court for indictment in 2012.

After the judgement was handed down, Viroj, Suchai and the other men found guilty were taken to Bangkok Special Remand Prison, to be later transferred to Klongprem Central Prison, which was built for prisoners serving long prison sentences.

The convicted women were taken to the Central Women's Correctional Institution. Corrections Department vehicles had been waiting at the court.

On Wednesday night, after arriving at prison, the former Krung Thai Bank president Viroj Nualkhair had a heart attack (cardiac arrest) and received emergency treatment at a medical unit in Bangkok Remand Prison.

Two more of the prisoners, Boonlert Sricharoen and Subin Saengsuwanmekha, also became suddenly ill. Boonlert was given medical treatment at the prison, while Subin, who has liver cancer, was admitted to the Corrections Department hospital.