3 million baht police reward to police 'is bribery' (with videos)

Police officers handing out cash rewards to other police officers is: 1. an act of bribery by Thai law, 2. a conflict of interest, 3. an insult to other hard-working police & 4. a violation of ethical standards. 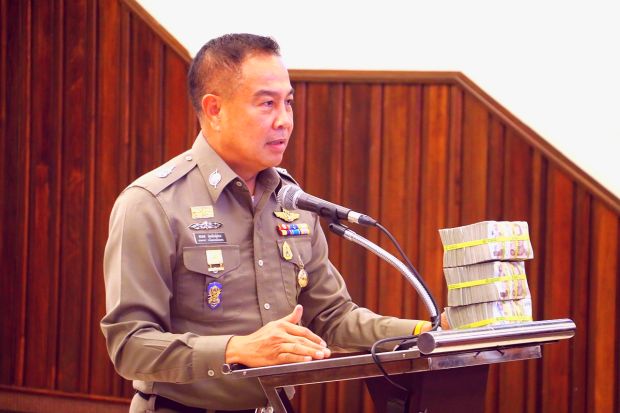 Pol Gen Somyot Poompunmuang shows off what he claims is three million baht, a "reward" for officers who made the first arrest in the Erawan shrine bombing case. (Post Today photo)

The national police chief took a shocking step on Monday. Pol Gen Somyot Poompunmuang went before the media and on live television to wave around blocks of 1,000-baht bills he said totalled three million baht.

The money was a reward for the policemen responsible for the arrest on Saturday of a foreign suspect in the Erawan shrine bombing. There is so much wrong with this act.

Police are already being paid a salary for their work. So why do they give a reward to themselves? The bombing case hasn't even been solved yet.  This is what a lot of people are asking.

Police officers get their salary from taxpayers. So it is their duty to find the culprits when a crime is committed, especially in a case that threatens national security.

DONATIONS TO VICTIMS OF BLAST BETTER

It would be better if these funds were donated to the victims of the blast, say some critics.

Srisuwan Janya, secretary-general of the Association of Organisations Protecting the Thai Constitution, said a state official handing out a cash reward to other state officials -- who are required to do their jobs -- is considered an act of bribery by law.

"This is a form of bribery under the Organic Act on Counter-Corruption of 1999, and this specific policy was strictly revised in 2011," Mr Srisuwan said.

Cash incentives derail the morality of law enforcement. It is similar to the police policy of giving part of the money from traffic fines to traffic officers.

Traffic officers standing at a checkpoint pulling vehicles over, at the same time as motorcycles, cars and even buses down the street are running red lights with impunity at an intersection, endangering the lives everyone, is a common sight in Bangkok.

Cash rewards are a conflict of interest since it is the duty of law enforcers to enforce the law, not only to enforce laws for personal gain.

If there is a cash reward, the incentives for enforcing the law change completely. .

If the effort or cost of enforcing a law exceeds the reward or benefit to the law enforcer, then the law will likely not be enforced, even if there is a threat to public safety.

WHAT ABOUT POLICE WORKING ON OTHER CRIMINAL CASES?

Pol Gen Somyot's claim that his force deserves a reward for one minor success in one major case is an insult to all the other police officers working on thousands of other criminal cases.

There is also the manner of Monday's gratuitous action by the police chief. He bragged that of the three million baht he plans to distribute, one million came from his own pocket, and the rest from unnamed "friends".

One is hard put to itemise the ethical standards broken here. They include a distasteful show of wealth, and admitting to having friends with special influence.

While Pol Gen Somyot's personal financial success is well known, the mention of anonymous, rich friends is out of line.

That high-ranking police officers are extremely rich while low-ranking police not only have low salaries and even have to buy their own uniforms, but are often heavily indebted, even to the point of bankruptcy has become an issue recently (see here and here).

CASE NOT EVEN CLOSE TO BEING SOLVED

Perhaps most disturbing is to hand out plaudits -- let alone actual rewards -- in a case that is not close to solved. Virtually every question about the atrocity at the Erawan shrine remains open. These include the identity of the bomber, the motives and the methods.The city bombers and those who helped assemble the bombs are still at large.

At the press conference following the Saturday arrest a reporter, being a good reporter answerable to the public, asked a question that many probably wanted to ask based on previous experience.

"Did you catch a scapegoat ?"

The national police chief blew up at this question: "Just go somewhere else if you want to talk about catching a scapegoat. Which publication are you from? You're not creative at all! Are you Thai?! People are enjoying the good atmosphere here," and he promptly ended the press conference and left: