Kratom leaves: Are they really a dangerous drug? (with video)

Follow three young men into Pattani's forest for a Kratom cookout. Despite use as folk medicine for stomach aches, diarrhoea, light pain relief or pick-me-up-snack, Kratom illegal since 1943 but is part of southern Thailand's culture & may have medicinal uses. 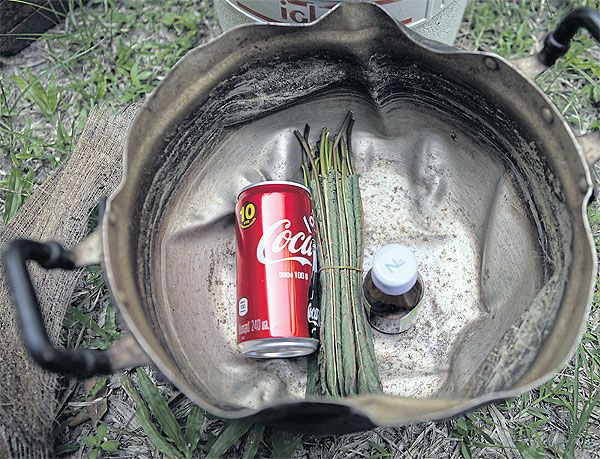 Simple mix: 4x100 is named after its four main ingredients — kratom leaves, cough syrup, Coca-Cola and ice. Kratom leaves are a mild stimulant and were traditionally chewed by farmers and labourers.

Kratom leaves: Are they really a dangerous drug? 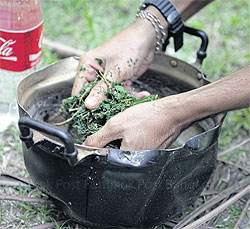 Home blend: Drug users start by crushing kratom leaves by hand before boiling a batch of 4x100. Best served chilled: Once the ingredients for 4x100 have been cooked together, the pot is cooled down in a container of ice before consumption.

The tropical Kratom tree (Mitragyna speciosa) is found across Thailand and Malaysia and is a member of the coffee family of trees.

The leaves of the tree are a mild stimulant, and were traditionally chewed by farmers and labourers needing a boost or some light pain relief.

Kratom has a long history of household use. Chewing the fresh leaves is a remedy for stomach aches or diarrhoea, while others grill kratom leaves and eat them with chilli paste for a pick-me-up snack. The herb has also used to ease withdrawal from opium addiction.

The drug can be addictive though and those who become addicted to the leaves lose weight and their facial skin darkens. Withdrawal symptoms are similar to prescription painkillers, including mood swings and muscle tremors.

Hauled in: Kratom seizures like this 250kg haul in Chumphon are increasingly frequent in the South, which a high percentage of users.

Best served chilled: Once the ingredients for 4x100 have been cooked together, the pot is cooled down in a container of ice before consumption.

The recipe for the kratom cocktail 4x100 is simple and all the ingredients are easy to find.

Unlike cooking up methamphetamine, or ya ba, it does not require sophisticated knowledge of pharmaceuticals.

Spectrum followed a group of three men in their twenties into the woods in the border province of Pattani to see how they make the 4X100 drug cocktail.

Mr Sunny (*not his real name), the oldest of the three men, said he and his friends shun alcohol because of Islamic principles.

Cooking meth is a tricky process in which the wrong formula can lead to explosions, but not even a safety mask is needed when making kratom.

Mr Lee*, who is thin and wears a T-shirt and tight jeans, said he sometimes plays the guitar while the others are preparing the cocktail. "It's like we are getting together for a coffee and a chat."

The ingredients for the cooking session are 30 fresh kratom leaves, boiling water, cough syrup and two of small cans of Coca-Cola.

"We make it whenever we feel like it," said the third member of the group as he stirred the juice. "We mostly do it in the afternoon to chill out," he added, since the drink makes him sleepy.

Mr Sunny has a small kratom tree in his backyard, but it does not provide enough leaves for daily consumption. When he wants to make 4x100, he buys 30 kratom leaves for 200 baht from a local dealer. Those who don’t want to brew 4x100 themselves can buy it in various forms, including a powdered version or ready-to-drink, but Mr Sunny prefers to blend it himself using fresh leaves which smell better.

SCIENTIFIC RESEARCH ON MEDICAL USE

The debate over kratom's medicinal use has so far lacked scientific evidence but researchers at the Prince of Songkla University in Hat Yai are currently studying the potential beneficial medical properties of kratom.

A study on the use of kratom as an antidepressant for patients recovering from alcohol addiction finds that alkaloid-rich extracts from kratom may alleviate sleep disturbance which is a common alcohol withdrawal symptom. Kratom might also aid morphine and opium withdrawal.

The Kratom Act of 1943 made the tree illegal around 60 years ago.  A Senate report in November 2003 said kratom was first banned because the government at that time wanted to boost tax revenue, a high portion of which at that time came from opium. Back then, the government had monopolised the opium trade and was earning revenue from taxes charged on it. But since opium prices were high, some users shifted to taking kratom leaves to help with withdrawal.

Kratom is not classified as a narcotic drug by the United Nations Office on Drug and Crime but is considered a plant-based "new psychotropic substance". The US calls kratom a drug of concern and laws on the use of the plant vary between states. In Thailand, kratom is classified as a Category 5 substance under the Narcotic Drug Law of 1979.

But the law has done little to deter drug users, who increasingly turn the traditional leaf into a sweet-tasting drink. Proponents of kratom say it is not strong enough to be considered a drug, while critics warn it can cause aggressive behaviour and psychotic episodes.

In 2013, the Justice Ministry considered legalising kratom to help wean addicts off harder drugs, including meth. However, public opinion was largely against legalising kratom, which many people associate with the insurgency in the South. 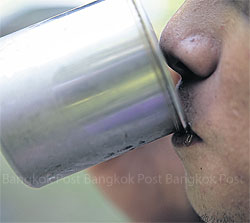 
There have also been reports of people mixing pharmaceutical drugs or ya ba and strange ingredients such as the ash from mosquito coils into cocktail concoctions.

In 2011, the Transnational Institute advocated legalising kratom use in recommendations published on the UN Office on Drug and Crime website. The organisation said kratom is an integral part of southern Thai culture. "Criminalisation of kratom is unnecessary and counterproductive given decades of unproblematic use," the report wrote.

The report also recommended revising "thresholds for sentencing in regards to boiling 4x100, which should not be considered as the production of a new drug” and called for "unhindered access to kratom for scientific research and to explore medicinal properties, especially its potential as a substitution drug to manage alcohol and drug dependence." 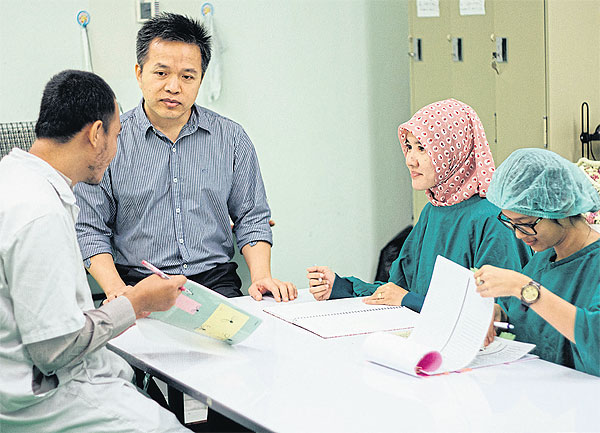 Drug developers: Dania Cheaha, left, and Ekkasit Kumarnsit, second left, and their team are studying the effects of kratom on rats. They hope their work will progress treatment for alcoholics 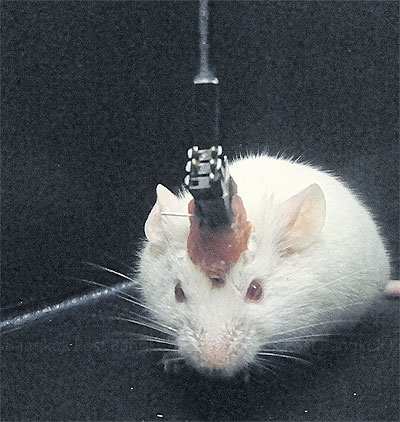 In the name of science: A team at Prince of Songkla University attached sockets containing intracranial electrodes to the skulls of 40 lab rats. The electrodes were then used to measure how an alkaloid-rich extract from kratom leaves affected activity in specific brain areas. 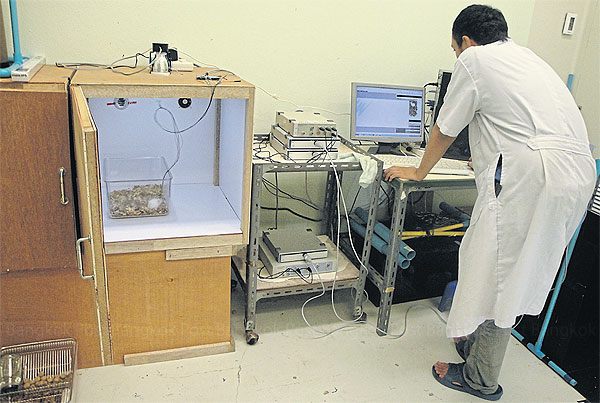 Hope for addicts: Researchers think kratom could serve as an antidepressant to alleviate alcohol withdrawal symptoms without negative side effects.