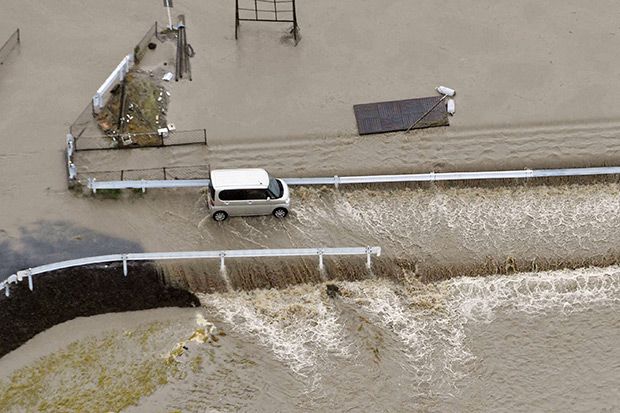 Tens of thousands of people were ordered to flee homes across Japan on Thursday as heavy rain pounded the country, sending radiation-tainted waters into the ocean at the crippled Fukushima nuclear plant.

Waist-high floods in some areas left rescuers scrambling to pluck people to safety as a wide area was deluged in the wake of Typhoon Etau.

Typhoon Etau, which smashed into Japan on Wednesday, moved out into the Sea of Japan by the end of the day, but a wall of rain continued to lash the country.

"This is a scale of downpour that we have not experienced before. Grave danger could be imminent," forecaster Takuya Deshimaru told an emergency press conference. 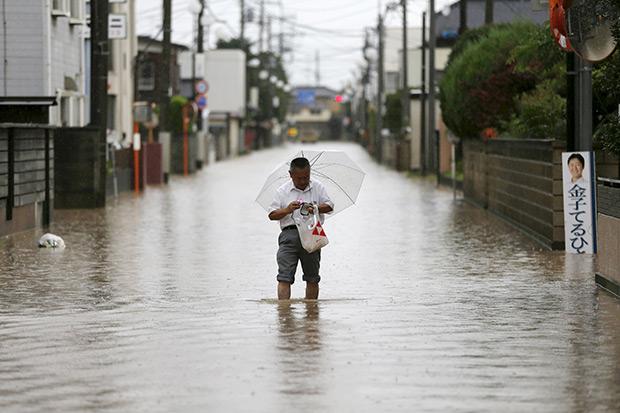 A man wades through a residential area flooded by the Kinugawa River, caused by typhoon Etau, in Joso, Ibaraki prefecture, Japan, Sept 10. One person was missing on Thursday as 90,000 people were ordered to evacuate after rivers burst their banks in cities north of Tokyo following days of heavy rain pummelling Japan, according to local media. (Reuters photo)

Parts of central Tochigi have seen almost 60 centimetres of rain since Monday evening.

More than a dozen people were injured, including a 77-year-old woman who broke her leg after falling in strong winds, local reports said. 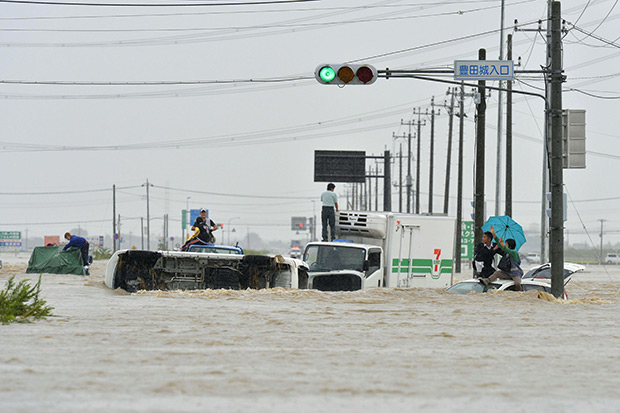 People wait for help as the vehicles are submerged in flooding in Joso, Ibaraki prefecture, northeast of Tokyo, Thursday. (Kyodo News via AP photo)

The torrential downpour has also exacerbated a contaminated-water problem at the Fukushima nuclear plant as it overwhelmed the site's drainage pumps, a spokesman for operator Tokyo Electric Power (Tepco) said.

Hundreds of tonnes of contaminated water have flowed into the ocean, he added.

Tepco is storing huge volumes of water used to cool nuclear reactors that were sent into meltdown when a tsunami hit Japan in 2011. 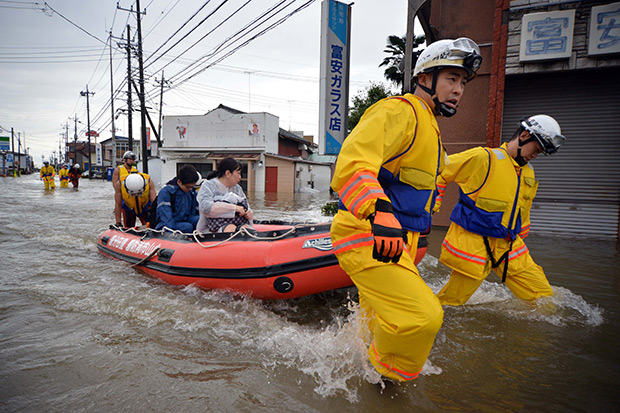 Rescue workers transport evacuees in a rubber boat through floodwaters at Oyama in Tochigi prefecture, north of Tokyo, on Sept 10. (AFP photo)

Tochigi authorities ordered more than 90,000 residents to evacuate, while another 116,000 were advised to leave their homes, public broadcaster NHK said.

The severe rain also disrupted rail transport in eastern and northeastern Japan. East Japan Railway has decided to halt service  between Fukushima and Shinjo stations on the Yamagata Shinkansen line for the day, Kyodo News said.

In Ibaraki prefecture, at least 20,000 were ordered to evacuate for fear of flooding...

Kyodo News reported that the Kinugawa River was overflowing at three spots and...dikes were breached in two rivers in Koga, Ibaraki, according to local authorities....